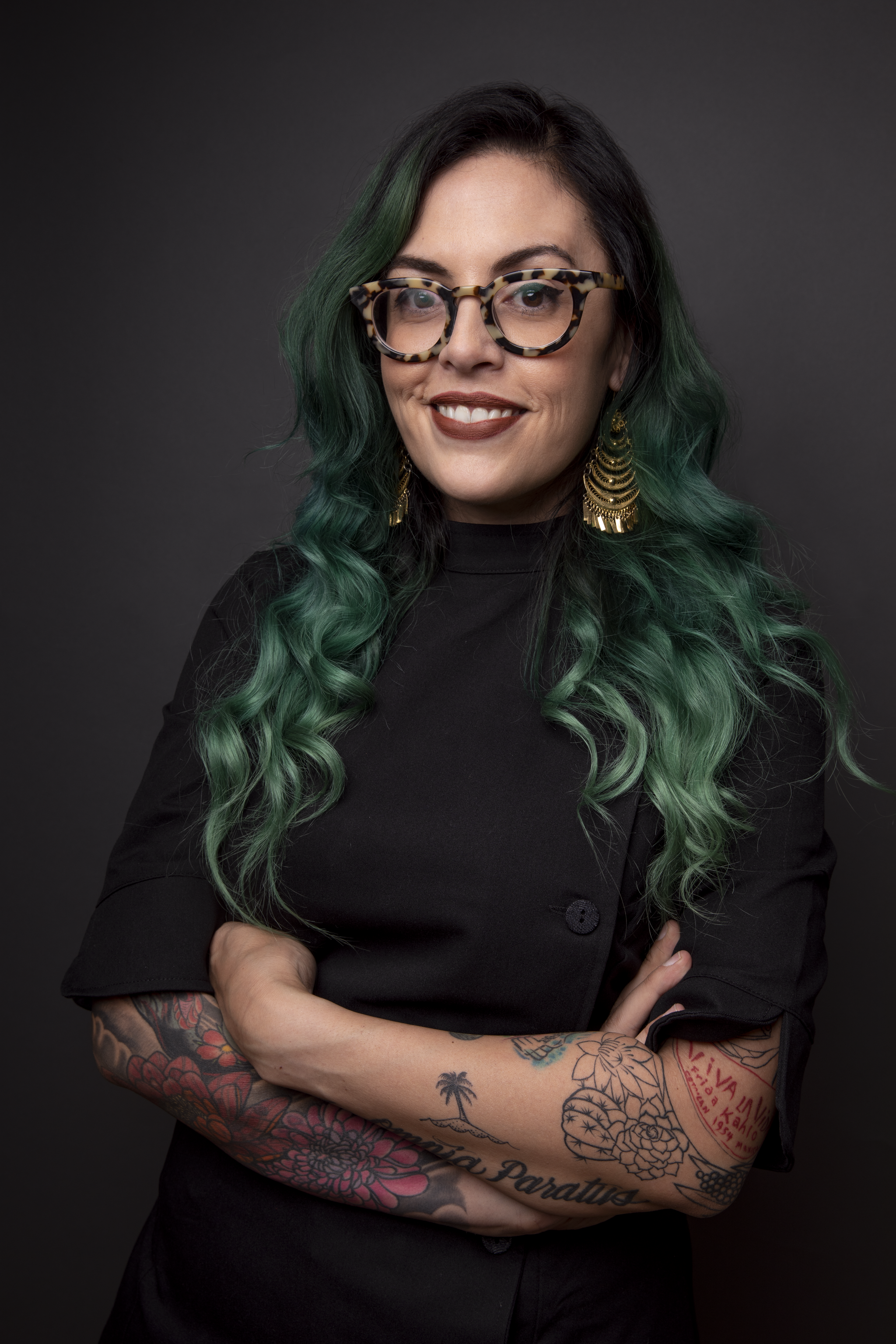 If you've ever wondered what the secret to a delicious taco is, Chef Claudette Zepeda firmly believes it all lies within the tortilla and the salsa. "That's the magic of a taco. It's not really the meat, it's the tortilla and the salsa. We've all had that bland tortilla and we've all had that bland salsa," she says. If you've ever had a disappointing taco experience, then you know how crucial it is for the tortilla to be soft and fresh and for the salsa to be bold and tasty. "Those are the things that are key," she adds. The first-generation Mexican-American chef knows a thing or two about cooking authentic Mexican cuisine. Growing up between Tijuana, San Diego, and Guadalajara, Zepeda learned to appreciate Mexican culture and food from an early start.

"In that gypsy nomadic childhood that I had, I spent every waking moment at my aunt's restaurant in Guadalajara. My parents had several failed businesses in the food industry when I was a child. So, I grew up always in some sort of restaurant or kitchen." Zepeda's close relationship with aliments and cooking made an impression on her life and career. However, before becoming Chef Claudette, there was a brief moment in time when the professional cook considered becoming a lawyer and moving to New York City. 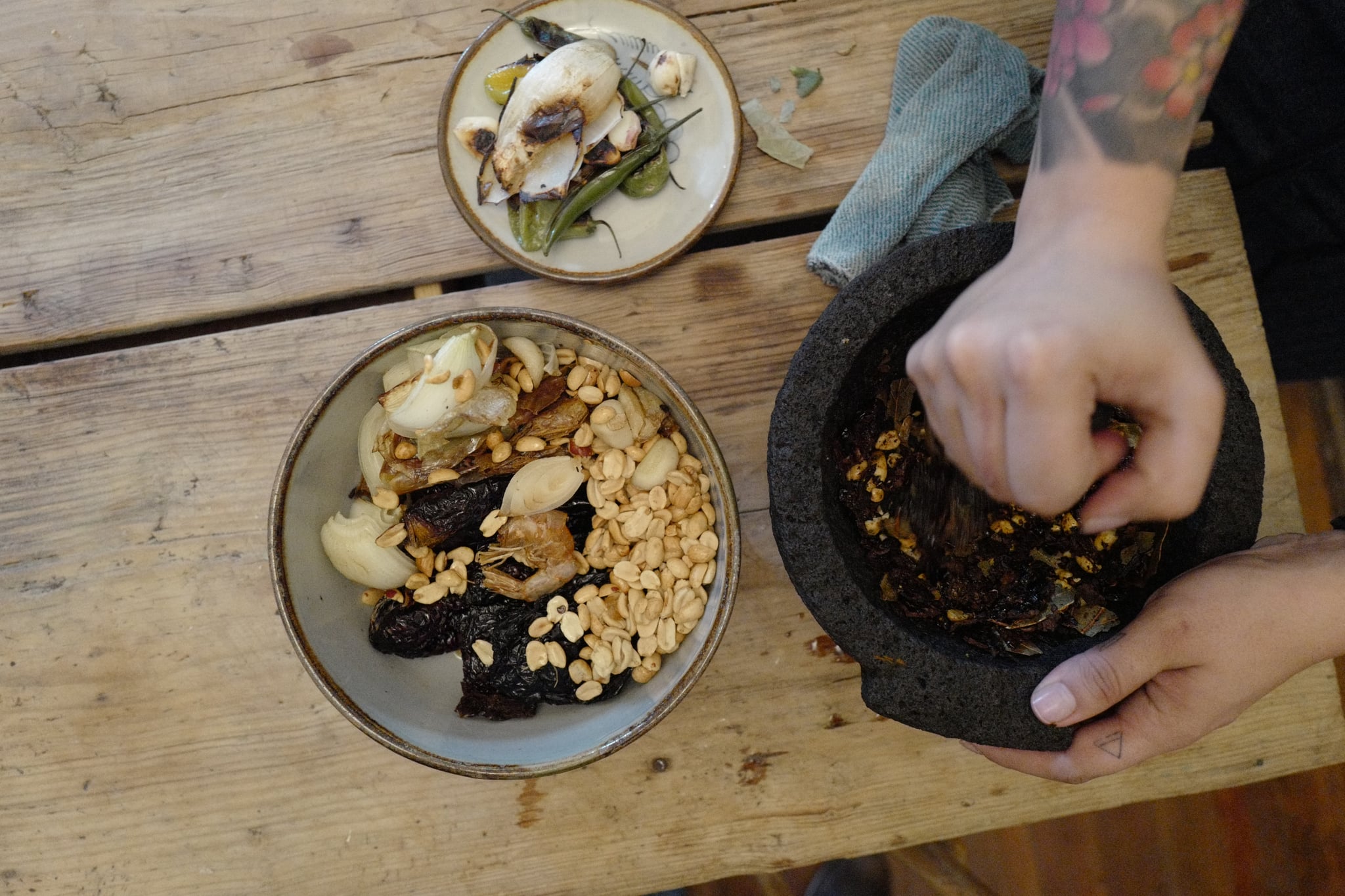 "My dad was a very well-manicured man and he would dye his hair black except for the front because the front would distinguish his canas and I would see him jump on planes and go to Guadalajara. He was an attorney in Mexico, so he was always back and forth and I found that very glamorous. I wanted to be just like him," explains Zepeda. At the time, Claudette was 18 years old and a new mom to her son. She had run away from home at 17, and while spending her free time watching the Food Network, the young Latina came to a strong realization. "I said, I really do get this weird pleasure from watching people eat what I make, even if it's just a quesadilla," she adds.

Zepeda admits it was natural for her to see women cooking in the kitchen. But when she learned about the possibility of earning a chef title, she decided she wanted to enroll in culinary school. "I lasted two semesters before I had to drop out for financial reasons. But in that short amount of time, I found mentors and my instructors saw something in me and helped me start my career," she says. Zepeda began her culinary career in pastry and later transferred into butchery, after months of being on welfare and being paid a very low income.

Soon after that, she switched over to savory where she remained. "It was about 10 years ago that I was very lost in my career and I decided to figure out what I wanted to say with my food and what I wanted to say within my industry and I landed on Mexico," she says. "I landed on finding out why we eat what we eat, who [are] the people and the languages that make Mexican cuisine so special, and why everyone is so enamored by it. I just became fully obsessed with our culture." 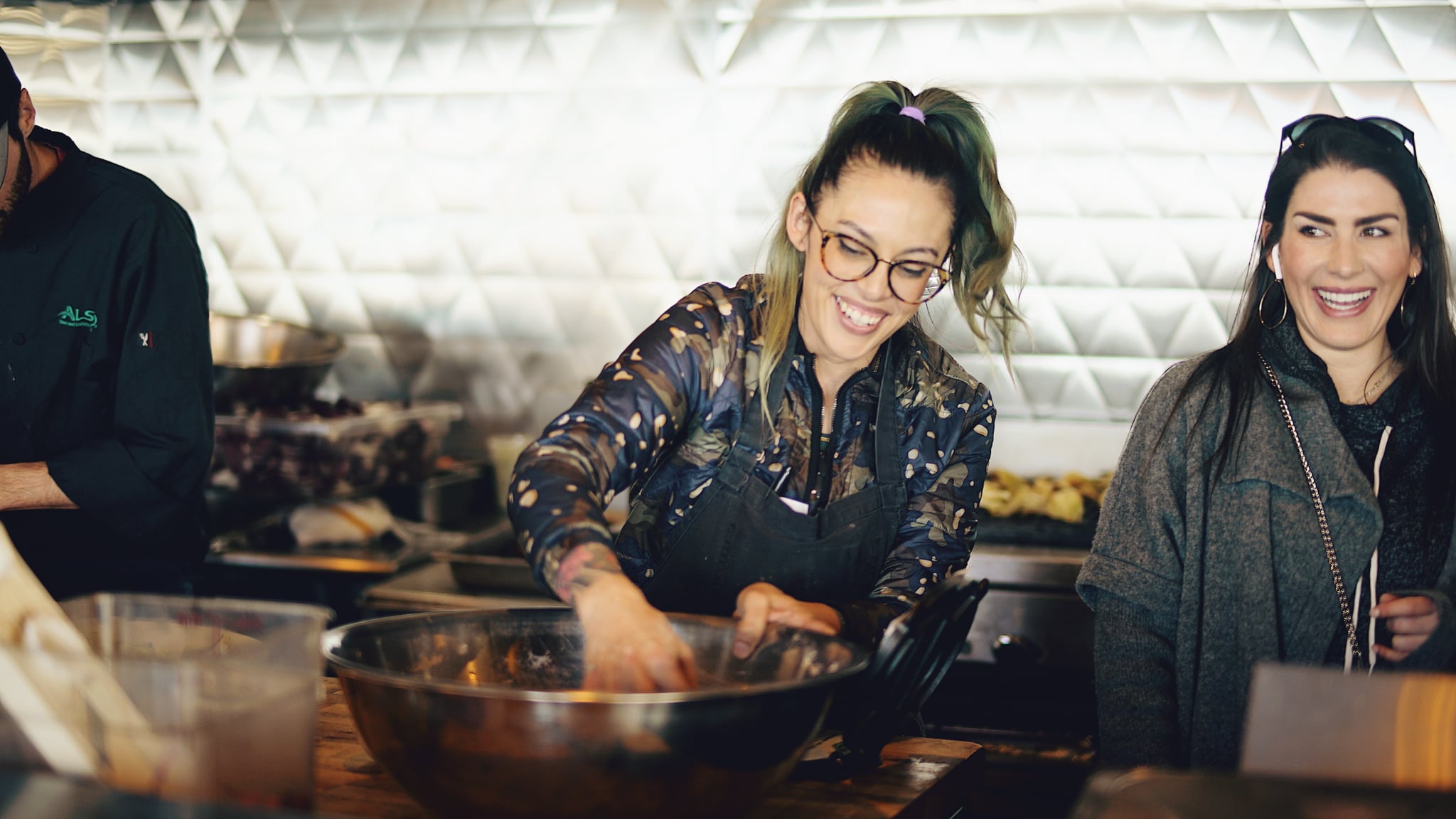 Since going after her dreams of becoming a professional chef, Zepeda has encountered the ups and downs of the industry, all while raising her two children. "People ask us, single mothers, how we do it, and I just say I was born into a life that was going to be full of these hurdles," she says. "I wasn't born into a privilege, which meant that I just had to do it. Failure wasn't an option, rejection is just redirection, so all those little things I just tell myself that I have to keep going to give them a better future."

Although her children are her most important reason for remaining focused, the entrepreneur acknowledges she has a fire within that helps her to keep going. "A lot of it is the women in my life and the women that I meet throughout Mexico. Listening to the stories of women who have overcome unimaginable things and to still smile and still cook every single day for their family, that's a big source of my fire," shares Zepeda. "Second, is the generational knowledge that I want to share. Seeing people's faces light up when I tell a story because I have so many random facts in my head about Mexico's history and Mexico's history with food, and cultural history with food. In turn, you have this beautiful quilt of Mexican food that is Mexican cuisine. There are times when [my fire] goes a little dormant where I need to rest and times when it's just screaming out the walls," she adds.

That inner vigor has encouraged her to participate in exciting ventures within her industry. In 2019 she earned the Best Chef: West nomination with James Beard for a Mexican cuisine concept held in San Diego. Most recently she teamed with Mahatma Rice in honor of Diá de Los Muertos where she had the opportunity to reflect on her family's culinary traditions. "I always align with brands that I actually use in my home. I align with brands that don't just want to use us for holiday but it actually is inclusion, it actually is a platform for me to talk about our culture and engage on a long-term basis."

Zepeda made a dish out of the two most essential foods in Mexican cuisine: arroz y frijoles. "My dad was a man of a lot of extravagant tastes. He migrated to Los Angeles in the 60s and he had this idea of what cuisine was but my dad, at the core of it, was a kid from Nayarit and he was raised in military school and military school was arroz y frijoles," says Zepeda. "I wanted to make him a dish for the altar that was representative of what he wanted to eat when he was Hugo, not el Licenciado." Chef Claudette also created arroz con leche in memory of her grandmother.

"It all comes back to rice. Those two plates literally raised me. The first time I ran away from my house I ran back to my mom's when she wasn't home and stole her pot of rice because I thought that's why mine was burning because she had a magic pot," she adds. But even though her success up until now calls for a celebration, Zepeda is fully aware of the stigma that comes with being a female head chef — not to mention, a Latina.

"It's sometimes met with a bit of intimidation. I get labeled as sassy or chola or all these things that make people comfortable putting me in those boxes. And the best part of what I can do is hold my head up straight and know that I am authentically me."

"It's sometimes met with a bit of intimidation. I get labeled as sassy or chola or all these things that make people comfortable putting me in those boxes. And the best part of what I can do is hold my head up straight and know that I am authentically me," she describes. 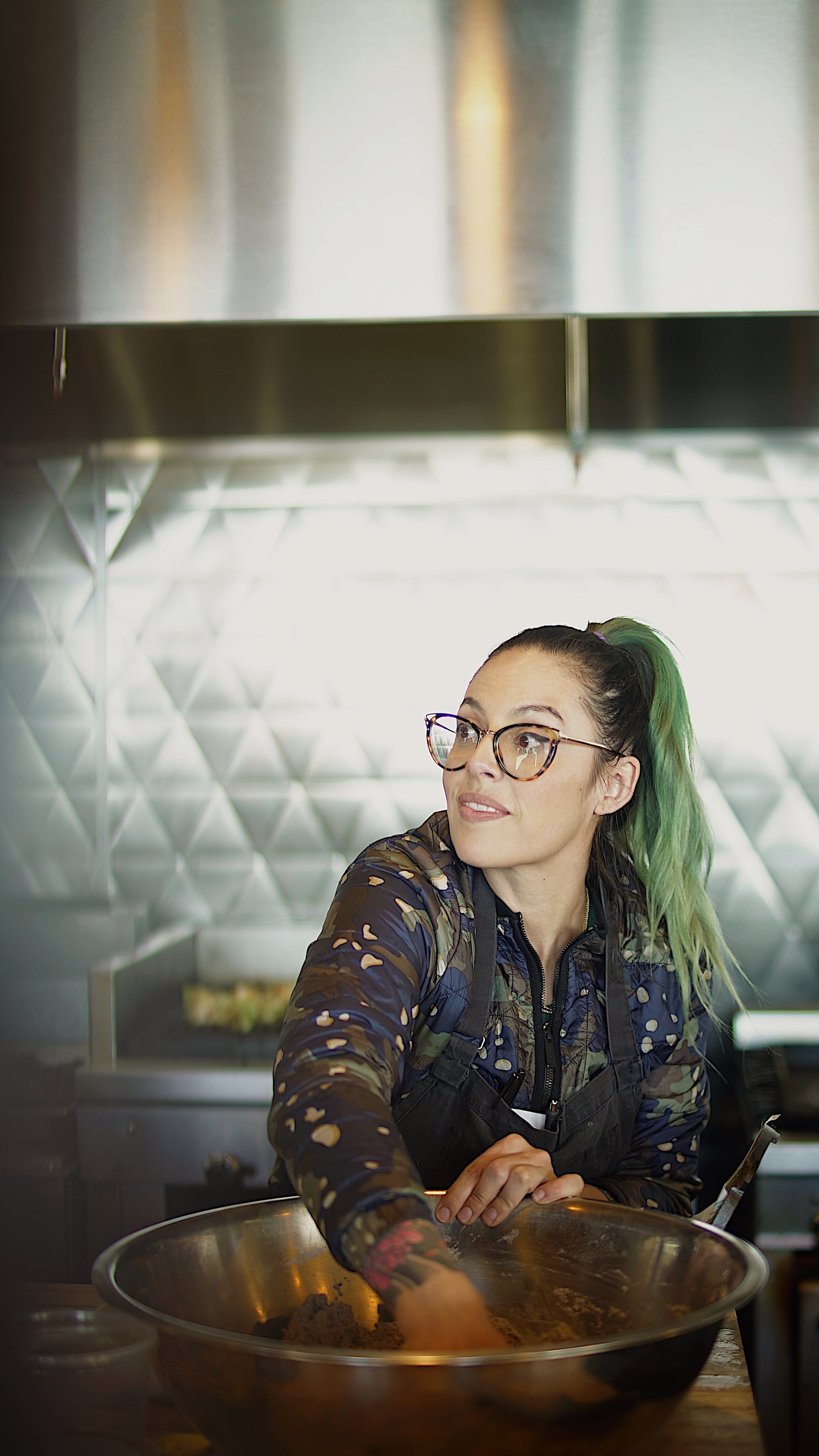 "When people say this isn't traditional or it's not authentic Mexican [cuisine], I always challenge that and I come back with: authenticity is very individual and tradition changes from house to house. In one neighborhood block, you can have ten different traditions for one holiday," she says. "I identify as a mother, a madre, una matriarca. I identify as the head of my household that is laying the groundwork through the power of my ancestral divine feminine power for my children to change the course of our generational family's dynamics. It can be intimidating when someone loves themselves and their culture so much because, if you don't, it feels like you should, so people then roll their eyes and say 'here she comes again with another Mexican fact,' but I stopped feeling self-conscious about that and I'm like I hope one day you love something as much as I love being Mexican."

Zepeda shares how she loves to have. a lot of conversations, some that could initially be uncomfortable for some, at the table because she believes food can serve as a bridge to put our guards down and talk about things like social inequities and generational healing. "Someone once told me, keep your head down, eventually when you're done running you'll look up and you'll be the only one in the race, and that's held very true to me," she concludes. "I still don't feel that I am where I want to be but I'm still in the fight and I'm still doing it every single day."