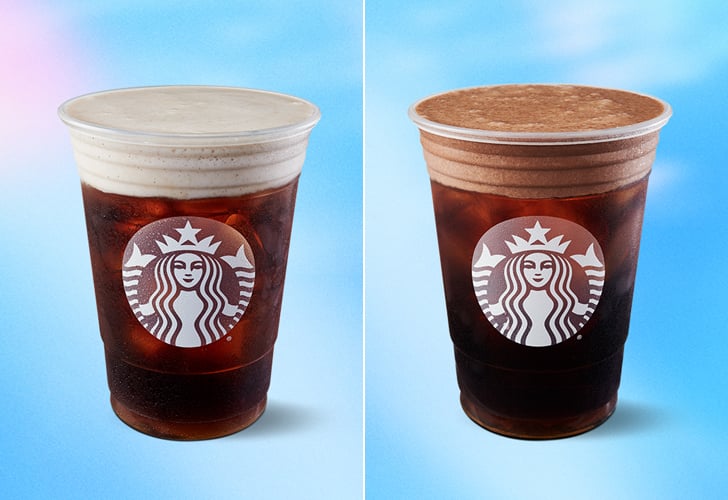 Two new nondairy beverages have joined the permanent Starbucks menu. On Tuesday, the coffee chain released the Cold Brew With Cinnamon Almondmilk Foam and Cold Brew With Dark Cocoa Almondmilk Foam. The former addition is perfect for snickerdoodle cookie fans — starting with iced cold brew and featuring cinnamon, vanilla syrup, and almond milk foam — while the latter is made for all those chocolate-lovers out there — it's finished with mocha sauce, cocoa powder, and almond milk cold foam. How are we possibly supposed to choose between these two?

Related:
Craving a Starbucks Frappuccino? Make Your Own at Home With This Copycat Recipe

To refresh your memory, Starbucks first introduced cold foam back in 2018 as a topper for its various iced drinks. The classic version comes together by whipping up chilled nonfat milk until it reaches a creamy, cloud-like consistency. Starbucks cold foam recently underwent a makeover when customers began asking for theirs to be blended with strawberry puree, resulting in a pretty pink froth. The coffeehouse's latest iteration — almond milk foam — debuted at locations nationwide on June 23, the same day it released a new breakfast sandwich made with Impossible Foods' plant-based sausage. So, are you Team Cinnamon Almondmilk Foam or Team Dark Cocoa Almondmilk Foam?