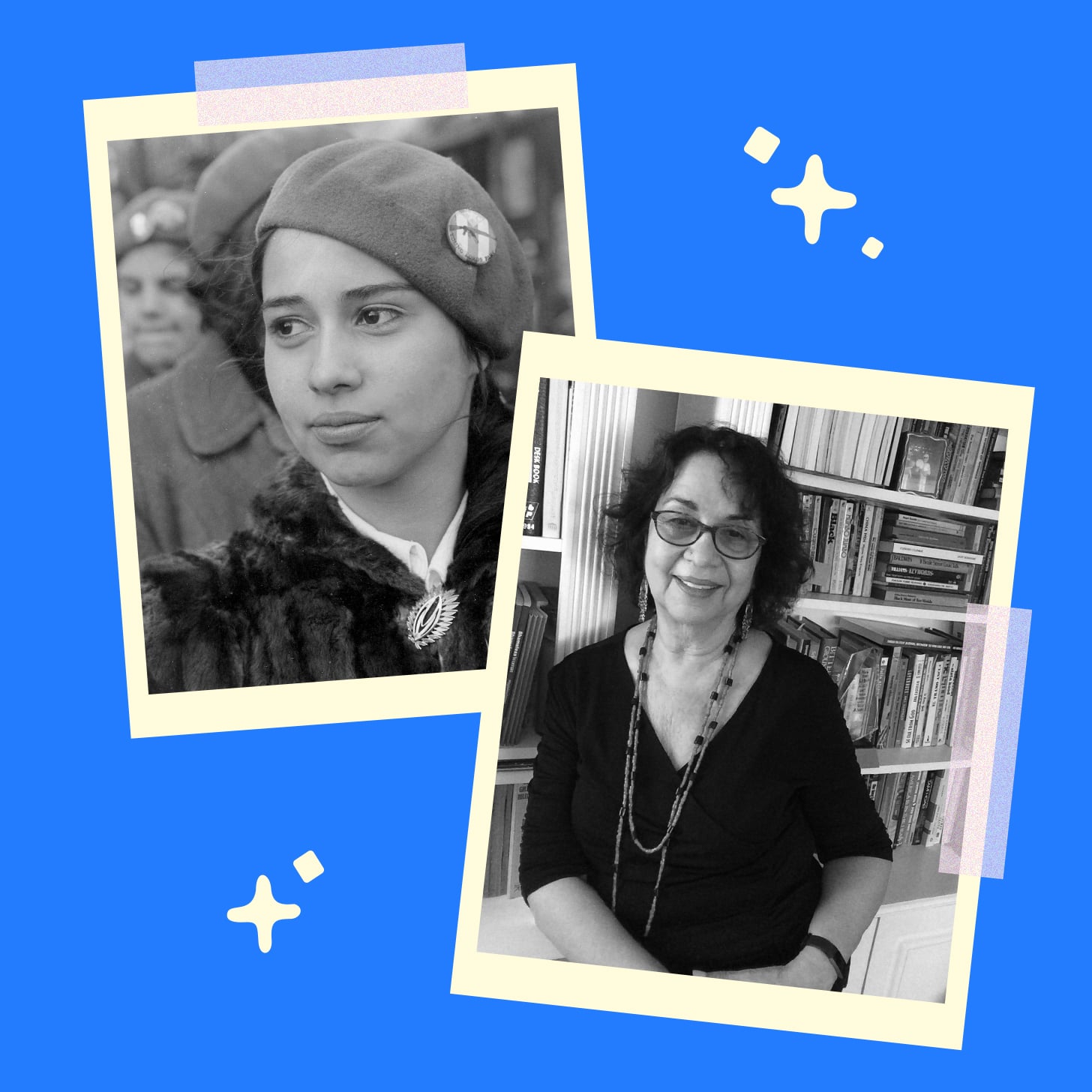 On Oct. 18, 73-year-old Nuyorican activist, educator, and author Iris Morales will be in conversation with filmmaker and scholar Frances Negron discussing "Documenting History Through Film" at the Center for Puerto Rican Studies in New York City to celebrate the 25th anniversary of her documentary, ¡Palante, Siempre Palante!, which chronicles her involvement with the Young Lords, an activist group that sought to advance the rights of Puerto Ricans.

The beginning of Morales's rich activism began in New York back in the '50s and '60s. "I grew up poor, and my family faced abuse from our landlord, who refused to provide heat and hot water in winter," Morales told POPSUGAR in a recent interview. Then a teenager, Morales refused to accept the ongoing mistreatment her family and fellow tenants were forced to endure. After reading her father's union newspaper, Morales learned that her landlord's chronic denial of necessities was against the law and decided to take matters into her own hands. "I was a precocious teen, and I decided to address it with our landlord," she recalled. "He was not happy. He told me, 'I'm a lawyer, I'm aware of the law, who are you to tell me what the law is?'" As a result of her landlord's negligence, Morales rallied other Latinx families within her building to organize and fight for their rights.

Morales reached out to a housing organization for help. "College students set it up to work with people in the neighborhood. Because they were Americanos, I didn't know whether to trust them or not," she said. But she knew she needed their help. "I asked one of them to bring someone to one of our meetings who spoke Spanish, and then I could work with them," she remembered, admitting that she couldn't take them seriously if they didn't speak Spanish. To her surprise, they followed through: "They sent a young Americana law student, who spoke perfect Spanish, and she was such a gentle and caring person." Morales eventually started working with the housing organization, which equipped her with the knowledge she needed to remediate her building's issues.

Against the backdrop of the civil rights movement and protests against the Vietnam War, Morales realized that she could effect change and improve the lives of her people through activism and decided to make it her life's work. At the time, she was closing out her final year of high school and set her sights on college: "Many of my friends were becoming nurses aides and were expected to get married and have children, but I realized that wasn't the same fate I wanted," she said. She reached out to her guidance counselor to figure out a path to higher education. "She said I wasn't college material, implying that I didn't belong there. I didn't appreciate that," Morales recalled.

As she was weighing her counselor's advice to attend community college, she received a life-changing letter in the mail: The City College of New York, a public university in New York City, was starting a program for "underprivileged" students that provided a year of remediation to prep students for a four-year college experience, as well as a stipend, free textbooks, counseling, and tutoring. Morales signed up and was accepted.

"At that time, the City University system was only about three percent people of color, with a total of 113 Puerto Rican and Black students in this program."

"At that time, the City University system was only about three percent people of color, with a total of 113 Puerto Rican and Black students in this program," she said. Since they represented the smallest demographic at the school, they united, creating groups that spoke to their lives, interests, and experiences as people of color. In her first year, Morales joined the Black organization on campus, but she eventually cofounded the first Puerto Rican student union.

The demand for change heated up in 1968 when the Puerto Rican and Black students at City College went on strike, demanding that the school increase its admission of Black and Puerto Rican students and hire more faculty of color. "The first student uprising took place in Austin, TX, by African American students, and eventually students at other schools such as Brooklyn College and Hunter College were protesting on their campuses," Morales recollected. Their efforts paid off in the fall of 1970 when City College admitted Puerto Rican, Black, and poor students in historic numbers.

Years later, Morales received an invitation from City College to speak at the anniversary of the founding of the pre-baccalaureate program and was overcome with emotion while delivering her speech. "In all my years of schooling, I never had a Latinx teacher, so I got choked up when I looked out in the crowd and there were at least several hundred brown and Black students present," she said. "I was overwhelmed by seeing a sea of faces we wouldn't have seen 15 to 20 years earlier."

When Morales teamed up with the Young Lords, a socialist Puerto Rican community organization, born in Chicago and influenced by the Black Panthers, she joined them to work collectively with other activists to make social change.

She first met them while attending a conference in Colorado and was impressed by their militancy and direct action strategies. "Several months after, I found out that the New York chapter was opening an office in East Harlem, so I jumped in and started doing Puerto Rican history classes with people who wanted to join the organization," she said, emphasizing that she wanted to bring attention to the "horrific conditions" facing her people in the United States.

With the Young Lords, which she called the most transformative years of her life, Morales participated in a staggering number of political and social wins. They forced the Sanitation Department to clean the streets in Spanish Harlem with the Garbage Offensive; demanded the city test children for lead poisoning in households throughout their neighborhoods; advocated for better care, improved conditions, and patient-worker rights for communities of color with a 12-hour protest at the Lincoln Hospital Takeover in the Bronx; and held a mass demonstration of 10,000 people to the United Nations demanding a free Puerto Rico.

She wore many hats during her five years with the Young Lords but primarily worked as a community organizer and educator. During this period, the Young Lords designed a 13-Points Program and Platform, which called for the self-determination of Puerto Ricans — all Latinx people. Each week, Morales would dedicate her class to discussing one of the points in their call to action — the release of political prisoners, the end of racism, the rejection of capitalism — and a rich array of people would attend. "We tried to bring everybody together to discuss issues we thought were important and to give people the tools to see class issues and motivations behind keeping people oppressed," she said.

In early 1970, Morales joined with other women members to form the Women's Caucus but met challenges, even resistance, in the male-dominated space. "The men were talking about revolution for the people, but they were acting like the revolution was for themselves," she said, adding that women activists were treated as inferior or often as men's "servants" or as if they were there "to serve them sexually." Something needed to be done, so the Women's Caucus presented the Central Committee with 10 demands, including an end to chauvinism, child-care accommodations, and the appointment of women to leadership positions.

A year later, Morales cofounded the Women's Union, which set out to actively recruit women in the community. The group developed a 12-point program and put out its own newspaper called La Luchadura. "The 12 points included the right to our true history as women and the right to self-defense," she said. It also opposed rape and violence against women.

In Morales's view, the fundamental reason the Young Lords imploded in 1976 stemmed from the fact that it turned narrow nationalist and deemphasized. "Any revolution has to be antiracist and antisexist," she said. Things started to fall apart when the organization moved to Puerto Rico and deemphasized issues of gender and racial justice, she remembered.

"That became a problem, because you cannot have a revolutionary perspective and only fight for one aspect of an issue."

"That became a problem, because you cannot have a revolutionary perspective and only fight for one aspect of an issue," she said. "It has to be a collective effort, and the focus should be on the people most marginalized and oppressed, because when we lift them up, we are all lifted." After her years with the Young Lords came to an end, Morales felt both adrift and depressed until she found her footing in activist work anew and decided to attend law school at New York University. As one of the few women of color, the experience was often alienating, but she made the most of it, working with Puerto Rican student groups and eventually serving as a representative on the school's Admission Committee.

After she graduated, Morales worked as an attorney for an educational media production company. Years later, she joined the staff of the Manhattan Neighborhood Network (MNN), a media hub, and spearheaded the launch of its community media center in East Harlem. "I loved the idea of returning to el barrio, doing education and media work . . . with young people," Morales said. She also cofounded the New Educational Opportunities Network (NEON), which provided media training and educational programs to young adults.

Then in the late '90s, she became executive director at a foundation called the Union Square Awards that gave grants to grassroots activists, all while maintaining activism and championing educational reform and the decolonization of Puerto Rico. In 1996, Morales put all the storytelling skills she learned in media into capturing the history of the Young Lords on film with ¡Palante, Siempre Palante!. It took eight years to complete her documentary, which she's presented in 25 states at various universities, where it remains an educational tool. Along the way, Morales earned yet another degree, an MFA in integrative media arts at Hunter College in 2008.

"That's why we, the Young Lords, worked with the Black Panthers and other organizations . . . None of us could've been successful without working together."

Reflecting on the current moment, Morales highlighted the importance of young activists knowing their history and working collaboratively. "That's why we, the Young Lords, worked with the Black Panthers and other organizations . . . None of us could've been successful without working together," she said, pointing out the importance of this message for the Black Lives Matter movement. "BLM has many subgroups. Even though we all have differences, the conflict we have with the person that has the boot on our neck is bigger than our differences," she said.

Identity
2022 Has Been a Dangerous Year For the LGBTQ+ Community. Here's How We Can All Help
by Nayanika Guha 3 hours ago

Identity
¿Y Ahora? Where Is the Cast of "One Day at a Time" Today?
by Melissa Santoyo 2 days ago