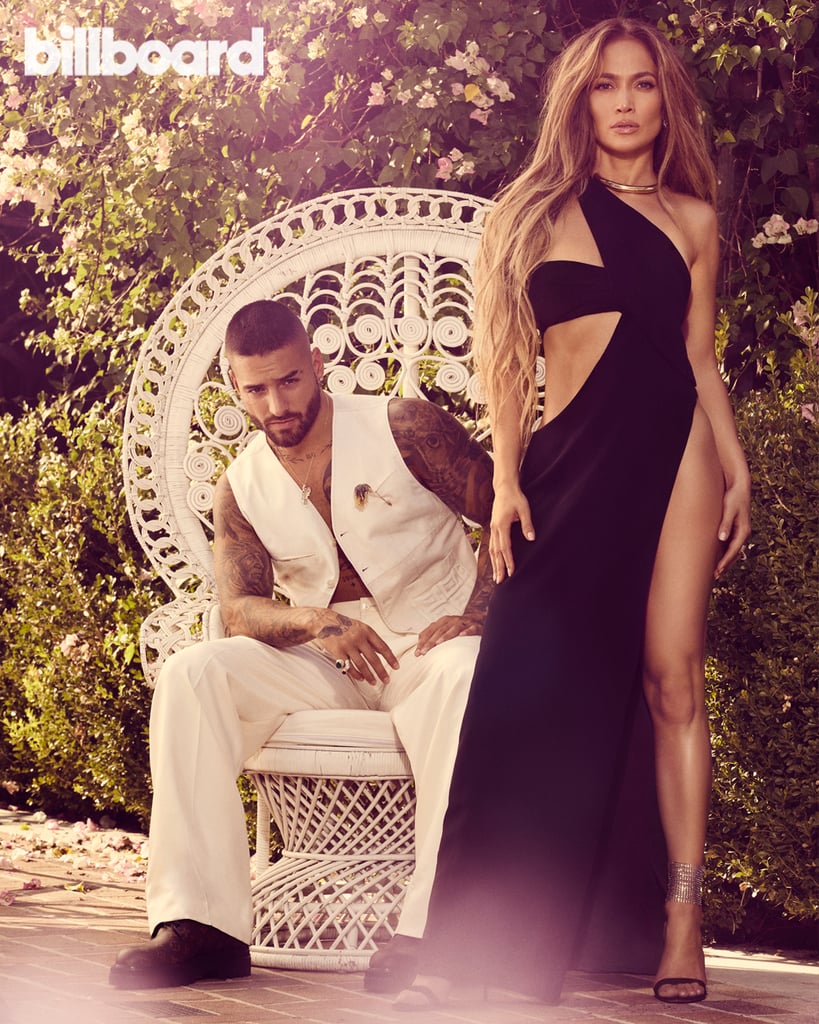 Maluma and Jennifer Lopez are the stars of Billboard's 2020 Latin Power Players issue, and whew, we're still trying to cool down from their sexy photo spread. In the photos, Lopez and Maluma give us their sultriest looks as they pose around the pool at LA's historic Paramour Estate, and in the accompanying interview, they talk about everything from their upcoming movie together to the importance of representing their Latin identity in music and film.

Maluma and Lopez will be starring as Bastian and Kat, respectively, in the upcoming rom-com Marry Me, which centers on Lopez's character, who is a pop star and finds out her fiancé (Maluma) has been cheating on her with her assistant. We recently got a peek at their characters in their "Pa Ti" and "Lonely" music videos, and while speaking with Billboard, Lopez opened up about the catharsis of playing a pop star. "I was playing [a character] trying to find someone who understood her and accepted her for all of what her life was but also just saw her as a person — like a real girl, which is what I am," she said. "People see you as this thing, this star. They forget you're just a girl and want to live and laugh and be normal."

"I always felt that individuality is what made me different."

Lopez also touched on the importance of Latin representation in film, saying, "It's not common. I've been doing movies for 25 years now, and I've done 40-something movies. There have been three to four movies in my entire career where I've had Latino costars." Marry Me marks Maluma's first feature film, and he admitted the road to achieving this wasn't easy. "It has been difficult to get into the American market, but people like Jennifer — who has been working a long time to get people to understand who we are as a community — opened a lot of doors for a lot of artists. I feel grateful for Jennifer," he said.

For both Lopez and Maluma, it's important to represent their Latin identity in everything they do, whether it be music or movies. "Everybody knows that I'm a Puerto Rican girl from the Bronx. It's not something I ever tried to hide — or ever thought that I should hide — so I can get ahead. I always felt that individuality is what made me different from every other actress that was out there when I first started. I feel it's the secret to my success," Lopez explained.

"We're making history right now as a Latin community, and I feel very proud of being part of this big, big movement."

The Colombian singer expressed similar sentiments, saying, "I have a tattoo that says 'Medellín.' I just want to be known around the world as Colombian. Everybody is always saying, 'When are you going to start singing in English?' Why am I going to do it if I'm doing concerts in Romania, Israel, Morocco, the States, and they're singing in Spanish? I want to bring my essence around the world and my essence is singing in Spanish."

In addition to the film, Maluma and Lopez are also working together on the soundtrack for Marry Me, but according to them, this is only the beginning of their partnership. "I think the J Lo-Maluma movement is just starting. After Marry Me, I think things are going to change a lot," Maluma said. "We're making history right now as a Latin community, and I feel very proud of being part of this big, big movement that we're having right now." Lopez then added, "Maybe we'll do a tour together." Um, yes please!

See Maluma and Lopez's sexy photo shoot ahead, then head over to Billboard to read their full interview.

Jane Fonda
Jane Fonda Reflects on Her Past Eating Disorder: "It's a Very Lonely Thing"
by Chandler Plante 10 hours ago