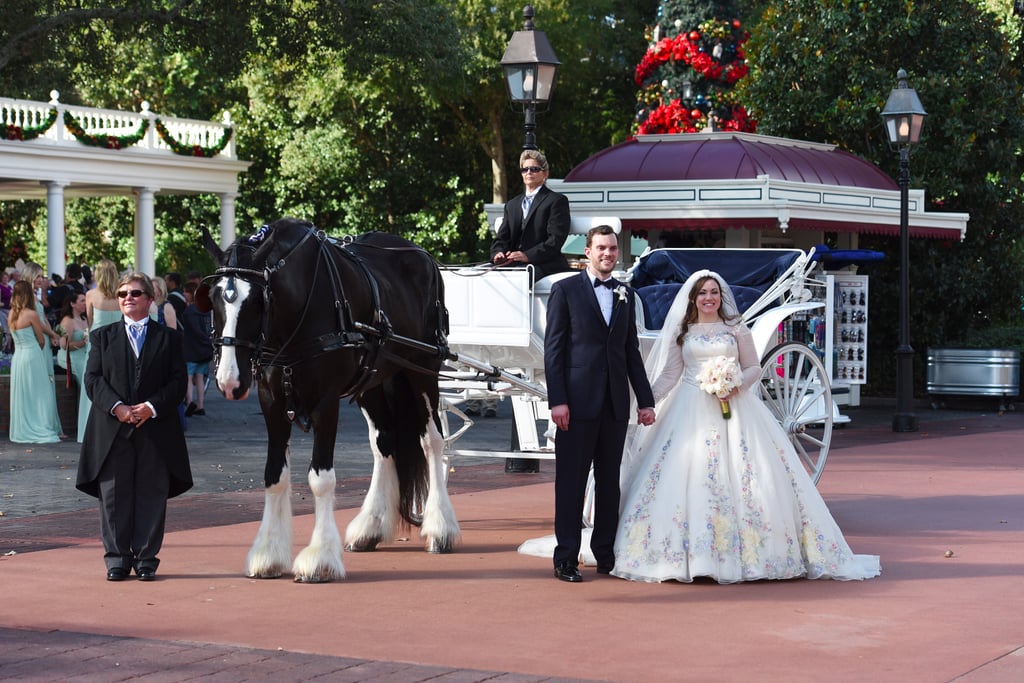 What It's Like to Get Married at Disney World (Spoiler: It's as Dazzling as You'd Expect)

If you're a Disney-obsessed bride-to-be who's long considered having a magical park wedding of your own, prepare to start planning by the end of this article. We've seen weddings decked out in Disney details, but we finally got to speak with a bride who got married at the Most Magical Place on Earth. And it gets even better — newlyweds Taylor Drane and Tyler Norman get to share their big day with millions of viewers on Freeform's Disney's Fairy Tale Weddings. Airing on Sunday, May 7 (at 8/7 Central), the 90-minute special will feature three couples, including Taylor and Tyler and their full wedding. Spoiler: Tying the knot at Walt Disney World is as incredible as you'd imagine.

Before getting married, the two dated for about seven years beginning the Summer before college. They met at the country club where they both worked as pool servers and decided to start dating a few weeks before leaving for their separate schools. Their fling naturally formed into a relationship once they both realized they didn't want to be with anyone else. The distance between them over the years wasn't enough to keep them apart, and once they got engaged, she immediately booked an appointment with Disney's Fairy Tale Weddings. When I asked whether her now-husband is as big of a Disney fan as she is, Taylor laughed. "He will admit that he never ever predicted getting married at Disney World," she said. But because the two were born in Florida, they had visited the parks plenty of times apart and together before the idea of a Disney wedding even came up. "I would obviously hint at it and he'd be like 'OK.'"

While they didn't head into their first meeting with Disney having any expectations, Tyler ended up being sold on how low-maintenance the entire process would be. "He really liked how it could reduce the stress of planning a wedding and the idea of coming down for a day to plan a wedding from beginning to end," she said. "It was really nice; we went down six or seven months before our wedding and we had our tasting that morning, and that afternoon for about three hours, we planned our whole wedding. And the day was fun!" Taylor said. A one-and-done planning process? Heck, I'm even considering having a Disney wedding now. And for the remaining months leading up to your nuptials, you simply iron out minor details over email. Unsurprisingly (it is Disney after all), Taylor shared how amazing and helpful Disney's Fairy Tale Wedding planners are. "They stick with your budget and they tell you the truth, and let you know this is what you can get for what you want to spend," she said. "You walk out of your planning session even more sure that you made the right decision."

"Some of the details at my wedding I didn't know were possible; it exceeded my wildest dreams, really. It could not have been a more perfect wedding."

Taylor had always dreamed of having a Disney wedding, especially during Christmastime. Their ceremony was held at Epcot while the party continued with a reception at the Atlantic Dance Hall along the boardwalk. She wanted her wedding to highlight the gorgeous holiday decorations that adorned the park, so she didn't want to take away from its beauty with any more special touches. "Growing up, [Christmas] was my favorite time of year and was what made me fall in love with Disney," Taylor said.

Though the wedding planning process was surprisingly not stressful in the slightest, they couple did decide last minute that they wanted to include a choreographed dance. So, a week before their wedding, they met with a choreographer in Orlando who saved the day with a fun routine to the Bee Gees. Their reception still featured the more traditional father-daughter and mother-son dances, and after the couple finished their first dance as a married pair, the two got down and got their guests pumped. While Taylor admitted that neither her nor Tyler are professional dancers, she said that they love dancing and wanted to revolve their wedding around it. Their choreographed number served to open up the dance floor to the rest of their guests.

Now, their wedding wasn't just a half-day event like your typical wedding. Their guests arrived the Friday before their Monday nuptials, which gave everyone the entire weekend to fully enjoy the parks together. "We basically did a pub crawl around Epcot," Taylor said. "If somebody wanted a margarita, we went to Mexico, or got a beer from Germany. I didn't realize my wedding was going to be a three-day celebration, but I kind of hoped it would be that way." The bride's favorite part of her whole experience? Her magical portrait session before the park opened to the public (see the photos here). Oh, and she was wearing the live-action Cinderella gown from Alfred Angelo's official Disney Fairy Tale Wedding collection.

"It was a once-in-a-lifetime experience because here you are in your most favorite dress, with your husband, and you're taking pictures in front of Cinderella's castle with the sun beginning to rise, and it's just surreal," she said.

If you have any remaining doubts about getting married at Disney World, don't. When I asked if her experience was as magical as we'd all expect, she answered, "I would say it was more because everything went so smoothly. I was anxious right before they opened the doors, but that was it. Once they opened the doors and I saw Tyler, all the anxious energy went away, the little that I had. I would say I was expecting it to be supergreat and magical, but because there wasn't that much stress, I was able to live in the moment and be as happy as I could be."

Get a glimpse of the couple's beautiful wedding!

Netflix
Jamie Lee Isn't Just The Wedding Coach: She's the Best Dressed Guest. Get Details on Every Look!
by Sarah Wasilak 9 hours ago