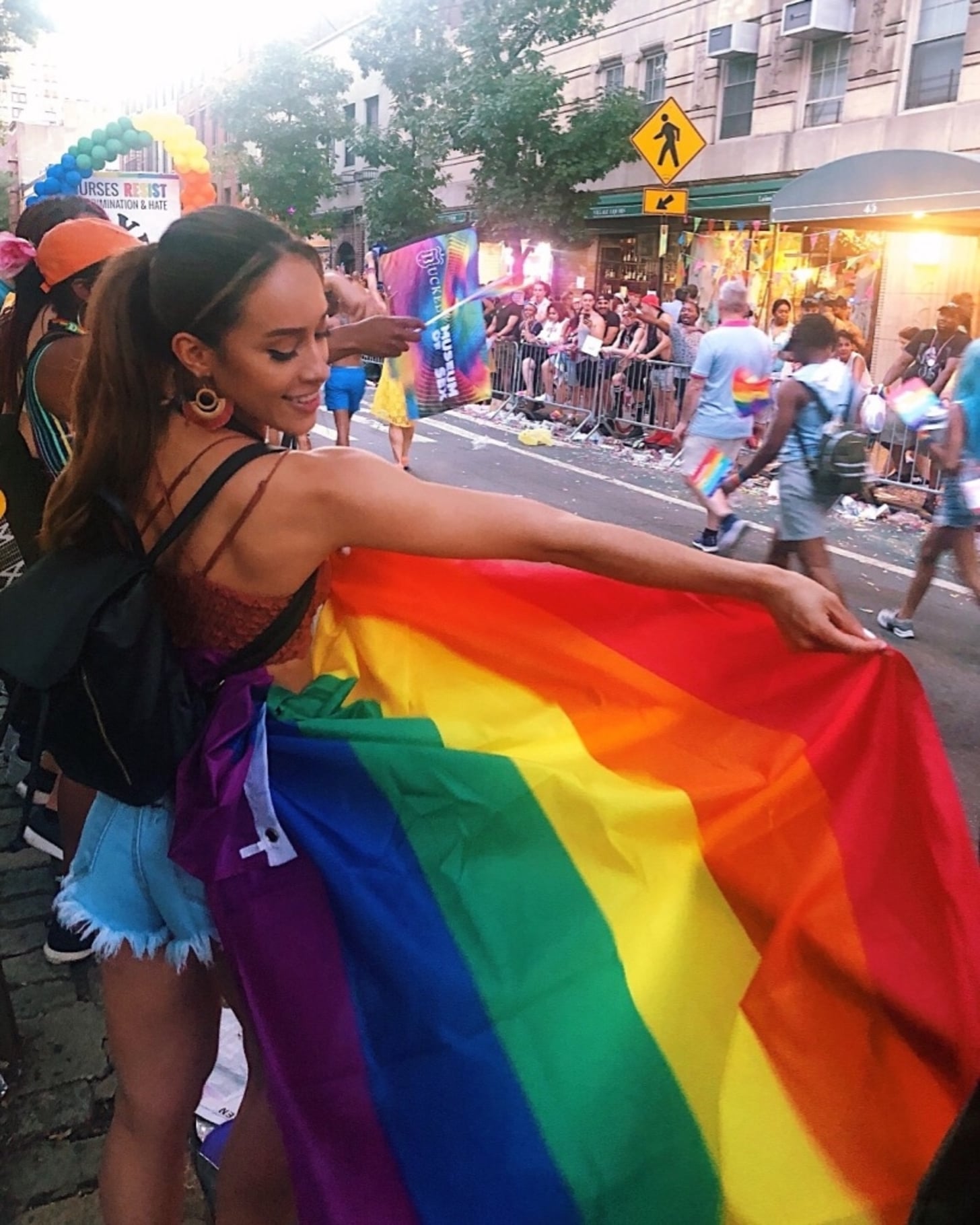 Last year, when I was 25 years old, I came out as bi/queer. First to myself, then to my close family and friends, and finally, on a sweltering June night after celebrating my first Pride in New York City, to the world. With my dad, who is also gay, standing next to me and my best friends sitting in front of me, I crafted my coming-out post for social media with shaky hands. I pressed send and my phone died immediately, which meant I couldn't see any reactions in real time, but my smile was wide and my heart was full to finally be me.

The news of my newfound queerhood came right after a devastating breakup in which my then-boyfriend of over half a decade severely broke my heart. Until that point, I had only been in relationships with straight cisgendered men, and the relationship I shared with him was the longest and most serious of them all. Months after the breakup, as I reveled in the joy of finally coming out, I was disappointed (but not surprised) to learn that people would immediately link the two events: thinking that either he had "made" me gay in some way, or that my being gay caused him to stray. What those who made assumptions didn't understand was that I had been queer long before I even knew what a boyfriend was . . . I just hadn't realized it until then.

In the end, my coming-out experience was both beautiful and exhausting, and in my own process of understanding my identity (plus the additional task of combing through others' questions and assumptions about it), I learned 11 new truths to live by that help me remain confident in myself and in my identity.

1. I'm Not Going Through a Crisis

Did I mention that my coming out was also sandwiched between my decision to quit my job and move to South America with my dog and chopping my hair off and dying it purple (in addition to the whole breakup thing)? Inevitably, many people in my life asked either directly or indirectly whether what I was going through could be labeled as a "crisis." And I get it. I see why, on the outside, it may have seemed like a succession of big life decisions that were actually cries for help. But if you really knew me, you would know that all those things have always been a part of me. I've always wanted to move to my family's home country of Colombia, I've always wanted to dye my hair a fun color, and I've always been a little bit gay. So, no, I am not going through a crisis, but thank you very much for asking.

2. I Missed So Many Signs

After coming out, I began to open myself up more to memories from the past and indications that I had always been interested in more than just straight cis males. Over time, I started to remember bits and pieces of my childhood I had forgotten in which I felt attracted to girls and otherly gendered folk. I remembered an early kindergarten memory of having a crush on a girl a few years older than me, which turned into immediate shame and guilt when I realized that following her around the playground and waiting for her at the bottom of the slide was not appropriate. I remembered the girl who practically made time stop the moment she stepped onto my bus in middle school and the gender-fluid student in my new high school who I couldn't take my eyes off of. Looking back, I realize now that there were so many signs I had missed. And while I sometimes feel overwhelmed with frustration for having missed them, I try to remind myself that I did the best I could with the information I had about myself and the world at that time.

3. How I Identified Before Is Valid

For 25 years, I identified as a straight girl. Moreover, the ally daughter of a gay man. Since as early as my kindergarten days, I openly and privately crushed on boys and only boys — even to myself, though there had been many signs of my queerness that I'd either missed or repressed. After coming out, I found myself grappling with my romantic history and almost hating myself for having dated only cis men. I wished that I'd dated more openly earlier so that I could have already gone through all the painfully awkward moments I expect to have when navigating the LGBTQ+ scene for the first time. I started to hate my past because it felt so constricting — so . . . wrong — compared to how I identify now. But I've learned to remind myself that how I identified before was valid regardless of how I identify now, because how I identified in the past was, and will always be, a part of my story.

Soon after coming out, I was asked two interesting questions: "Why did it take you so long to realize you were gay? How did you not know until later in life?" My 25-year-old self just blinked. Later in life? If anything, I'm only a quarter of the way through! There's still so much I have yet to learn about myself, and I'm excited about that. As shown by the many LGBTQ+ celebrities who chose to come out in their 40s, 50s, 60s, etc., it's clear that a person isn't always aware of their identity at what one might consider an early age, much less ready to share it with the world. It goes without saying that we should celebrate anyone embracing their truth at any age, and accept them for who they tell us they are.

5. I Don't Need Receipts to Be Gay

If I had a quarter for every time someone questioned my sexuality by saying, "You're not bi. Have you ever been with a woman?," I would have enough money to buy each person their own personal rainbow flag and send them all first-class to NYC Pride. Listen, it's confusing enough for recently out LGBTQ+ folk to figure out within ourselves why our past interests don't match our present-day preferences. And it's scary as hell to think about jumping into the dating scene and being vulnerable in ways we aren't used to for the first time. So please, don't ask me for proof. The receipts you ask for do not define my identity. I am queer with or without them.

6. I Don't Have to Come Out to Everybody

In the wake of coming out, I was surprised to learn that there would be many moments all day, every day in which I would have to decide whether or not to come out again. When a comforting coworker said, "You'll find a nice guy one day," or when my taxi driver joked, "Moving to Colombia? Think you'll find a husband out there?" I had to decide in the moment whether to speak my truth. It meant saying, "Um, actually . . . I'd be OK with a husband or a wife!" (or anything in between, really) and going through that exhausting conversation over and over again, or just nodding my head quietly and agreeing in the privacy of my own thoughts that whenever I'm ready to look for a future spouse, my sights will be set on more than just finding a nice husband.

7. Those Who Matter Will Understand

Before I chose to share my identity with anyone other than myself, I worried that the people in my life would start to see me differently after my coming out. I worried that my girlfriends would feel uncomfortable around me and that I would have to continuously explain to others the intricate details of why I identify the way I do so that they wouldn't misinterpret my story. Eventually, I had to let that fear go and remind myself that those who matter to me — the ones who really know my heart — will understand. And once I did let go of that fear, I felt free to share my newfound identity with everyone in my life at my pace and in the manner of my choosing.

It's always difficult after a traumatic breakup to know whether you're truly ready to date again, and even more so after realizing that you're attracted to nearly every type of person under the sun. On one hand, I felt excited to explore my newfound identity and to find fulfillment in ways I hadn't known before. But on the other hand, I felt nervous, scared, and overall not ready to date anyone: men, women, or anyone in between. I soon accepted that I might not be ready to date anyone for a long time, and that's OK. Once I feel emotionally, mentally, and physically ready to put myself out there romantically again, I know I'll find someone great.

9. Life Just Got Much More Exciting

One of the major and most obvious perks I've found from identifying as queer is that my number of potential love interests has grown exponentially. No matter where I go, be it the park, store, or even watching TV in my living room, so many more people catch my eye than ever before. Soon after my coming out, I found myself noticing masculine men, feminine men, masculine girls, feminine girls, nonbinary folk, and gender-fluid individuals all with the same level of interest. And even though I'm not ready to date anyone yet, it makes me so excited for what is waiting for me when I am.

10. My Identity Is Ever-Evolving

When I first realized that I was "gay in some way," I felt comfortable with the label "bi" to describe my feelings of being attracted to multiple genders. But as I dug deeper into my self-exploration, I realized that I actually identified more with the labels "pan" or "queer," meaning that I'm attracted to all genders. Going forward, I'm completely open to the possibility of my identity evolving further as I continue to gain more life experience. And if it does, that's OK. However I choose to identify at any point in my life is valid, even if it differs from how I identify today.

After all is said and done, the growing pains and emotional labor of coming out are worth it because it feels so freaking good to live life out in the open. Even something as small as openly gushing over a female celebrity crush with a friend or putting the rainbow flag emoji in my Twitter bio brings me excitement, joy, and immense pride in my identity and in the community I now belong to. There is nothing more powerful than being able to say, "This is me, and I'm never turning back."