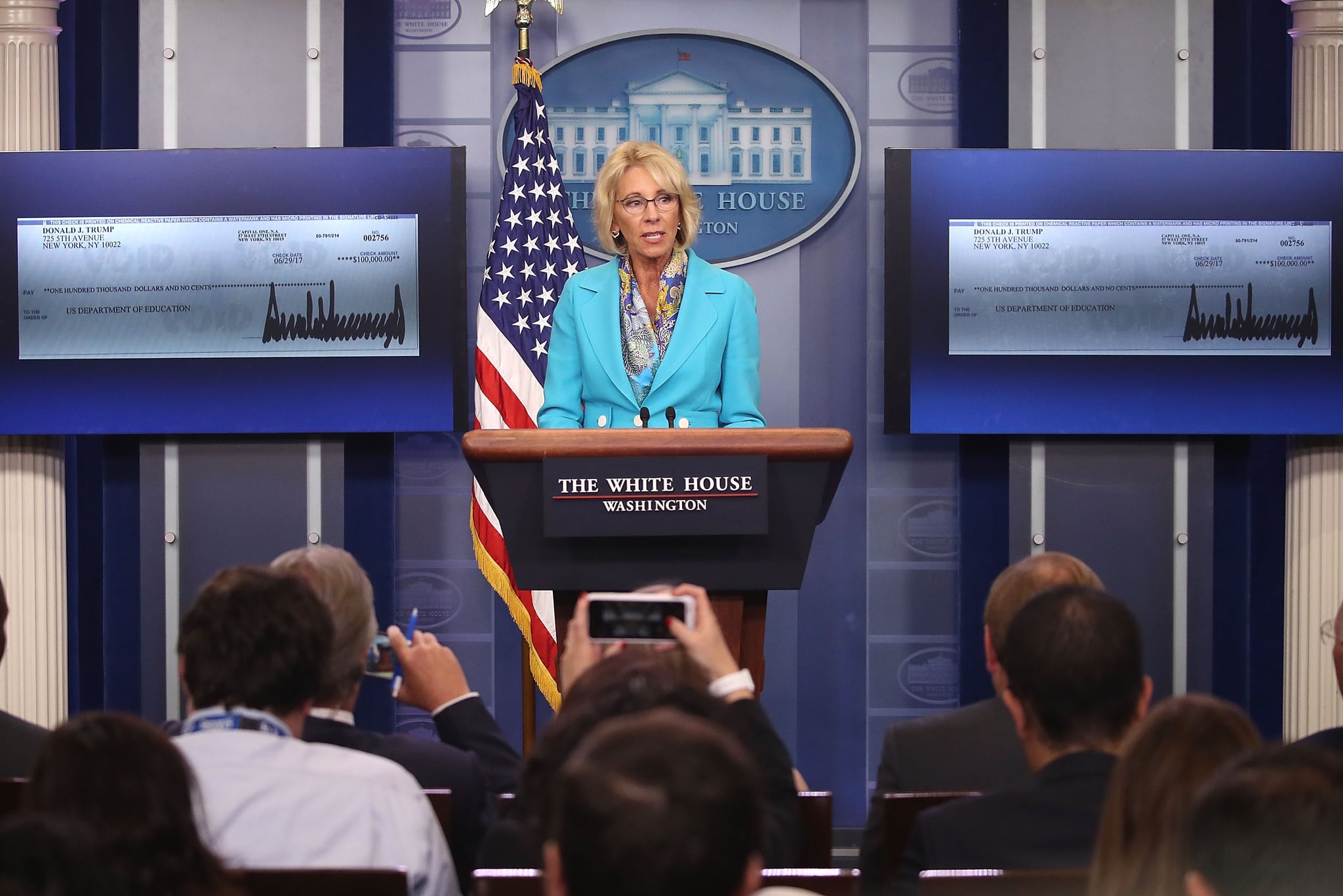 Education Secretary Betsy DeVos's Sept. 7 remarks on Title IX, the policy that protects students from discrimination and outlines how schools must handle sexual assualt cases, started out on a surprisingly promising note. "Not one more survivor will be silenced," she solemnly swore to a crowd gathered at George Mason University, adding, "We will not abandon anyone." These were shockingly supportive words coming from a woman who met with "men's rights groups" and accused rapists before delivering the much-anticipated policy speech.

But after a hopeful start on the delicate issues surrounding Title IX, DeVos quickly veered into seriously appalling territory. She attempted to spin an amalgam of falsities and one-off anecdotes into a proper case against Title IX that was at best sloppy, and at worst, an unforgivable affront to sexual assault survivors everywhere. Personally, I could only walk away from this speech with further questions about why DeVos and Donald Trump's White House remain so invested in advocating for the rights of accused rapists, instead of focusing their efforts toward improving campus safety across the board.

Below, we've outlined just a few of the most alarmingly false points from DeVos's remarks to consider. You can check out the full transcript of the speech here.

Many of DeVos's statements were laced with the outrageous implication that Title IX can cause anyone on campus to become a target for wrongful rape accusations, which is simply untrue. She lamented that "good intentions" did not make up for a lack of the "serious pursuit of truth." DeVos recalled anecdote after anecdote about men she'd met who had been wrongfully accused, all the while failing to mention a single numerical statistic to back up the purported notion that wrongful accusations were running rampant on campuses. In reality, only an extremely small percentage of reported rape cases are deemed to be false. Furthermore, DeVos failed to put forth any evidence proving that Title IX seeks to accomplish anything outside of advocating for victims and encouraging them to come forward. Quite simply put, the rules themselves exist to ensure that victims don't have to face the enormous burden of resolving issues of personal safety alone, not to wrongfully target anyone on campus.

Falsity #2: Reporting Sexual Assault Is Currently Framed "As a Contest Between Men and Women"

While there were many misleading points in the Title IX speech, this was one of the most dangerous assertions made. DeVos claimed that "This conversation has too often been framed as a contest between men and women or the rights of sexual misconduct survivors and the due process rights of accused students." This logic (logic being a generous label, no doubt) massively undermines the reasons why victims come forward — and downplays the many nuances of one of the most pressing issues on college campuses to date.

It should be obvious that victims who report sexual assault are almost certainly not seeking to win some sort of gender superiority contest; instead, they're seeking personal safety. DeVos's warped notion that these men and women are merely reporting sexual assault to take a jab at the opposite sex is both morally appalling and objectively false. In fact, many campus rape cases often go unreported, and it's difficult to imagine that this isn't out of fear of facing accusations exactly like DeVos's — that they're only coming forward for the sake of revenge.

DeVos claimed that "punishing speech protected by the First Amendment trivializes actual harassment." But Title IX is not that simple; it doesn't consider just any act to fall under the category of sexual harassment and explicitly states that it protects the right to free speech. According to the Department of Education, "Title IX's prohibition against sexual harassment does not extend to legitimate nonsexual touching or other nonsexual conduct." Furthermore, the Department of Education's site specifically outlines that "Title IX is intended to protect students from sex discrimination, not to regulate the content of speech." Pretending that the intention of this legislation is to do anything but protect the safety and rights of all students is not only a blatant lie, but a dangerous step backward in the fight against campus assault.