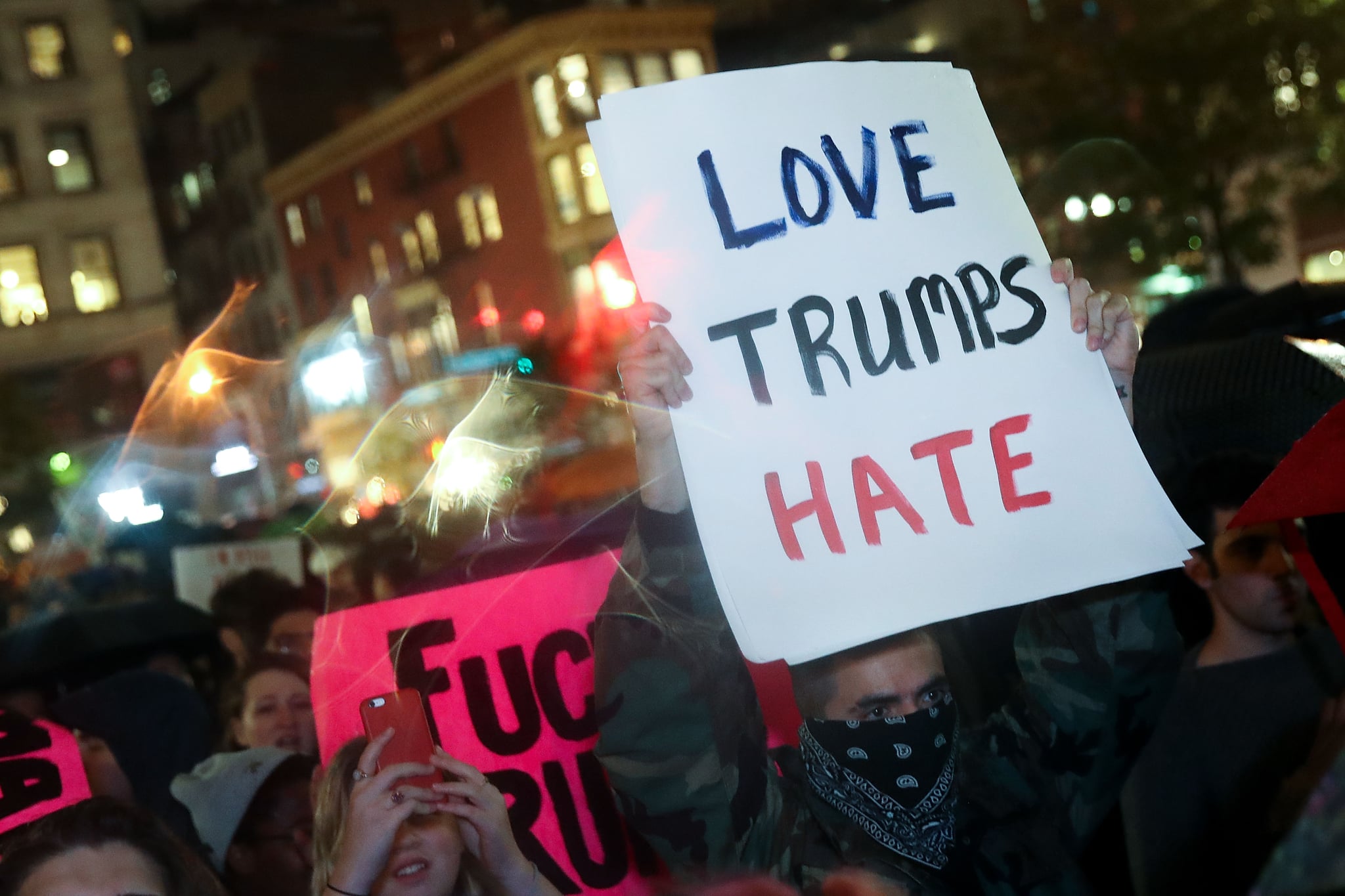 I'm sadly not surprised that minorities are reporting hate crimes across the nation. I wish I was. A huge portion, albeit not the majority, of the nation just elected a man who once tried to evict black people from residences he owned simply for being black. I am surprised at the number of attacks that have reportedly already occurred, their brazen nature, and it has been less than 48 hours since Donald Trump was elected. What can we expect by the time he has moved into the White House?

I'll give you an idea of what the next four years could look like for people of color, women, and Muslims in America.

It's already started. I feel more sick than I did earlier. #NotMyPresident #Election2016 pic.twitter.com/URtNxQIk0e

Placed on their car in NC.

"Can't wait until your 'marriage' is overturned by a real president. Gay families = burn in hell. Trump 2016" pic.twitter.com/jyBjUSS2TI

I walked into my room and my heart aches with pain. pic.twitter.com/GFD5gBmPmD

@ShaunKing this was in Durham, NC pic.twitter.com/EVGTXCMEmT

White students @ Southern Illinois University (@SIUC) decided to put on blackface and pose in front of a Confederate Flag to celebrate Trump pic.twitter.com/OEP2yEW3So

White dudes saw a woman alone and yelled "grab her by the pussy" then tried to do so.

This is only a swatch of the hate crimes people are reporting across the internet. Twitter collected dozens of screenshots of Facebook posts and tweets to illustrate the extent of hate crimes across our country. It's a deeply troubling and staggering list to read through. I hardly made it through one post without crying.

When Trump won the election on Tuesday night, it validated the opinion of a threatened majority: white people. The US Census Bureau predicts that by 2045, white people will be a minority in America. Driven by the fear of losing that power and prominence, white people elected a man who repeated their fears back to them. Trump legitimized their hatred by stoking their insecurities that immigrants are taking their jobs, all Muslims are instruments of ISIS, black people are criminals, the list could go on. White men in particular will be emboldened by Trump's victory — and those with prejudices are no longer obligated to hide their boiling hatred because of the social decency (perhaps what the alt-right might describe as "political correctness") that once inhibited them evaporated Tuesday night.

We already know the many hateful labels associated with Donald Trump's name. We will never forget, or let him forget, his horrific and downright disgusting words about women, Latinos, black people, and Muslims. But since it's open season for those people who share his unfortunate opinions, remembering his history of insults is not enough: we must protect those innocent people who are suffering because of irrational hatred.

We are not going to be silent. Love and intrepidity will trump hate.

We must resolve to do whatever we can when we witness these attacks to advocate for the victim, to shield them, to ensure they know they are not alone. We will be quick to intervene when we see someone under attack. We will go out of our way to vocally support those targeted by signs and graffiti. We will proactively let our president know that he will be held accountable for all of us who he demeaned, terrified, and marginalized. We will explain to our children that people who do not look like them are not to be feared, but loved.

I am a woman, decidedly not a minority, but suddenly I understand what it is like to wake up in fear that I might be attacked. I am afraid that I might be walking down the street one day and a man will try to "grab me by the p*ssy" because his president vindicated sexual assault. I cannot even begin to imagine the fear of having your hijab ripped off your head, the fear that your family might be ripped apart, or the fear that you will be beaten because of your skin color and who you love.

Complacency is no longer an option. Putting your head down, looking at your phone, pretending you don't see the Muslim woman in tears at the gas station is not an option. Fighting back with fists is not an option either because the only way to combat hate and win is with love. If so many hate crimes have already transpired one day after Trump's election, you better believe the next four years are going to be rife with equally as disturbing attacks. The attacks might multiply and the hatred could worsen. But we must also remember: there are more of us with targets on our backs than there are predators.

Racism certainly bought Trump a one-way ticket to the White House, but we are not going to be silent. Love and intrepidity will trump hate.