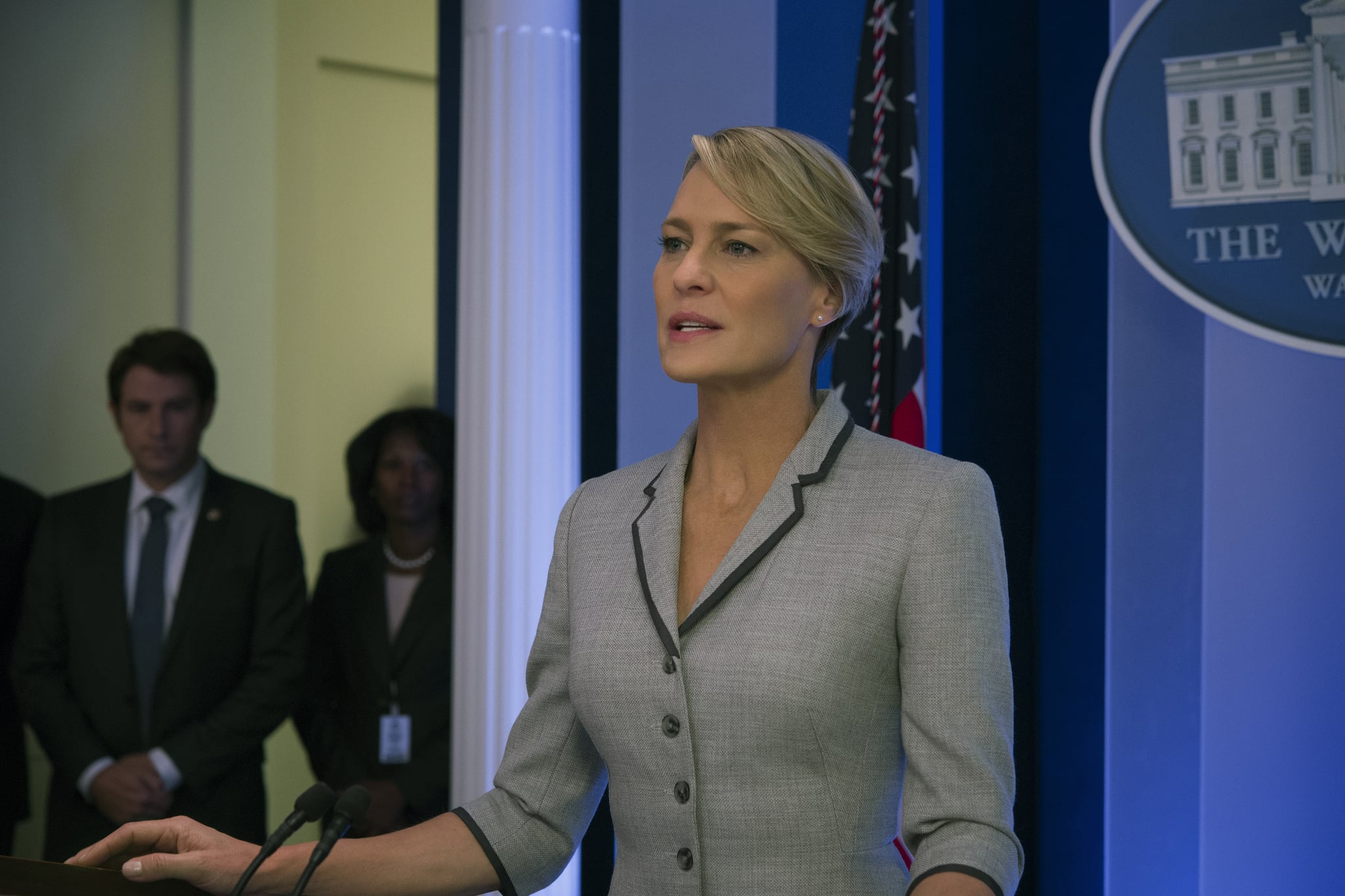 The Internet erupted in virtual applause this week when House of Cards star Robin Wright revealed that she threatened to go public if Netflix didn't start paying her as much as her costar Kevin Spacey.

"I was looking at the statistics, and Claire Underwood's character was more popular than [Frank's] for a period of time," said the actor during an interview at The Rockefeller Foundation yesterday. "So I capitalized on it. I was like, 'You better pay me or I'm going to go public.' And they did." (Spacey had been making $500,000 per episode to Wright's $420,000, according to a Business Insider report.)

My initial reaction to Wright's admission was to feel encouraged and empowered by her bold, unwavering move; it's certainly the kind of strategic power play that would make Claire Underwood herself proud. But after a flickering moment of triumph, I found myself depressed and angry over the cynicism it revealed. The fact that Wright essentially had to threaten to blackmail the powers that be at Netflix to be granted her reasonable request — to simply be paid as much as her male cohort — is a stark reminder of just how much farther we need to go in order to make a meaningful change.

And while I'm still deeply glad that women in Hollywood, like Wright, and Jennifer Lawrence, and Patricia Arquette, are pushing the equal-pay cause forward, the reality is that most women don't enjoy an iota of their privilege. The very fact that Wright is a white, wealthy woman with a considerable public profile is what gave her the cache and power to strongarm her employers into paying up. And privilege matters. As a newly released study by The American Association of University Women shows, the pay gap is decidedly wider for women of color. We've all heard the oft-quoted "79 cents on the dollar" figure used to describe how much, on average, women make in comparison to men. But that figure compares white women to white men. When broken down by race, the numbers are far more disheartening. Black women make 63 cents to the white man's dollar. American Indian women make 59 cents. And Latina women make just 54 cents.

Wright's story, while it may represent a small step forward for gender parity, also serves to highlight exactly why the gender pay gap still exists. It was apparently the potential PR nightmare and public shaming that prompted Netflix to compensate the female star of their show commensurately to the male star. But until our society views and treats equal pay as a given, as a moral and ethical imperitave, the gender pay gap will not close — and everyday women will continue to suffer for it.

Jordan Fisher
If Netflix Needs Ideas For a Work It Sequel, We're Happy to Provide Some Thoughts
by Mekishana Pierre 17 hours ago

Netflix
Could Harlan Return in The Umbrella Academy? 3 Theories on How He Could Play a Bigger Role
by Grayson Gilcrease 18 hours ago

by Maggie Panos 14 hours ago