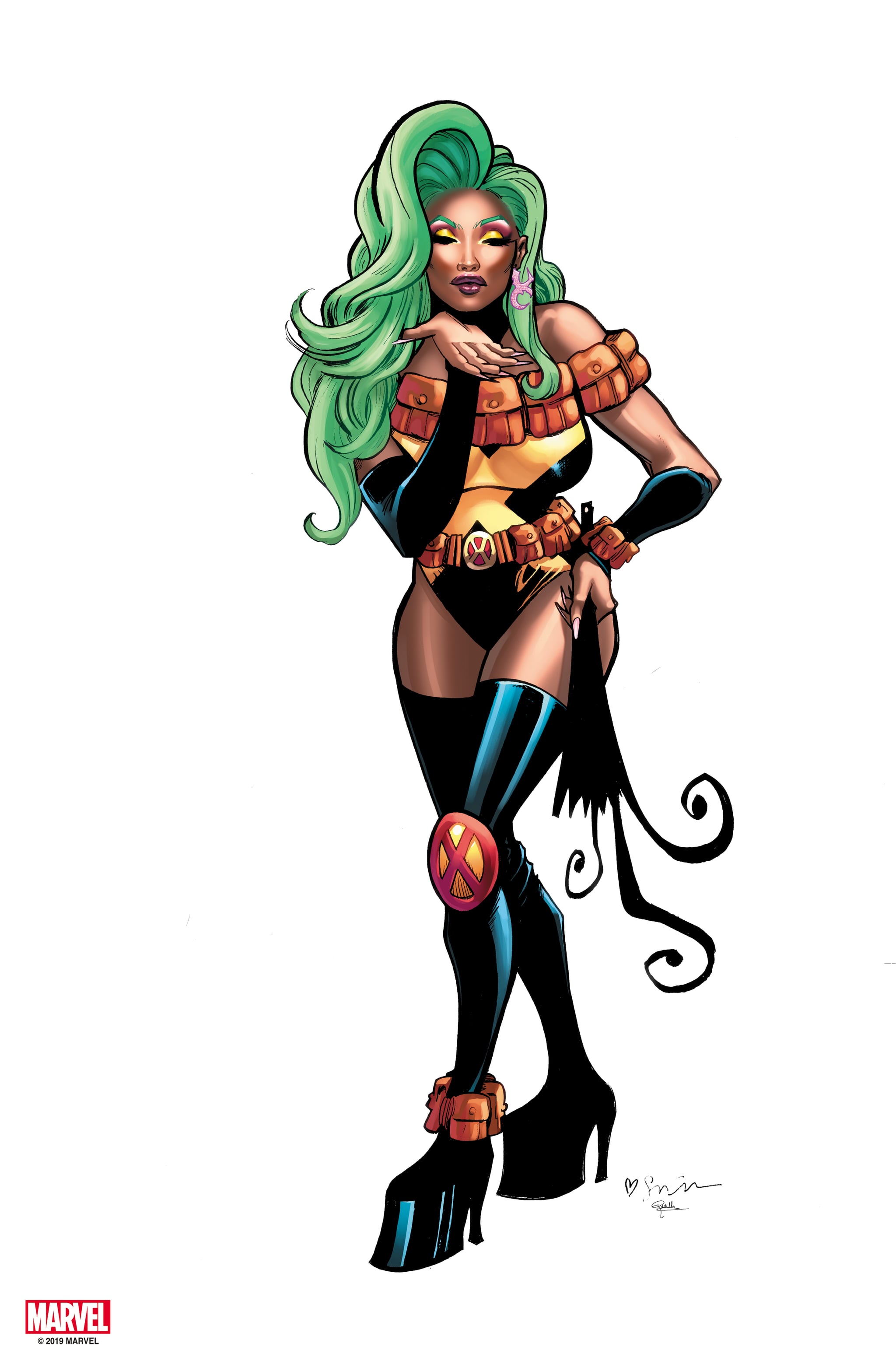 Months before the release of Iceman issue four in December 2018, I made a last-minute decision to write in a new character, one who was merely meant to pepper a scene with a little fun and humor. Little did I know it would change the landscape of LGBTQ+ representation in comics.

Amid the drama of our titular hero Iceman preparing to go toe-to-toe with Mr. Sinister, his cohorts run a sprawling parade for Mutant Pride. The emcee? A drag queen named Shade who emerges onstage from a pocket void dimension, harnessed through her fan accessory, natch. A few puns and one fight scene later, readers instantly fell for her. In less than a month, fan art, memes, and drag cosplay galore poured in. The real tea about all of this, however, is that the love caught both Marvel and myself completely by surprise.

" . . . None of us spent much time thinking about the impact a visibly queer drag queen mutant would have on the audience."

Let me rewind a bit. Iceman, which I write, first launched in 2017 and was canceled due to low single-issue sales. But Marvel revived it soon thereafter when its book market afterlife proved strong. With a new arc in mind, I wanted to apply the mutant metaphor — where the thing that makes you unique is also what makes you society's problem — to aspects of my queer identity beyond "coming out" and "I kiss boys." I landed on the story of a hero who is learning how to be a true ally, and how the most privileged often have the system's most marginalized to thank for their safety. While Iceman has the requisite third act fight with Mr. Sinister, Shade helps Bishop, Emma Frost, Christian Frost, and the Morlocks stave off a group of murderous henchmen from attacking Mutant Pride. It's very intentional who I placed on the front lines, thanklessly protecting a bunch of oblivious partygoers in the city where the Stonewall riots took place.

There was no cinematic beauty to my conceiving Shade. I was probably in a coffee shop, thinking: "Wouldn't it be rad if . . ." I always toyed with the idea of a drag queen who becomes a reluctant hero, and I had an unused character in a Generation X proposal that never saw the light of day: a young girl named Shade who could create pocket voids (all for the "throwing shade" pun.) I quickly put the pieces together and sent series artist Nathan Stockman a sketch of what Shade would look like: a drag queen of color who had bold curves and a penchant for incorporating X-Men visual motifs into her "lewk." She'd have green hair like Polaris, the X emblem on any corner of her body, and more pouches than every '90s X-character combined.

Considering we were tackling stories that dealt with a survivor of conversion therapy, and used the underground Morlocks as subtext for the trans-slash-non-binary community, none of us spent much time thinking about the impact a visibly queer drag queen mutant would have on the audience. For me, it was my normal to go to a rally, and then watch some drag queens do death drops for tips at a local bar. Considering the massive success of RuPaul's Drag Race, Shangela and Willam's roles in A Star Is Born, and FX's award season darling Pose, drag queens and ball culture felt very much ingrained in mainstream pop lexicon. I was brought on to tell a story through my lens, and I had no clue just how starved readers were for that authenticity. So that's why LGBTQ+ creators should be hired to make myths!

You always hope to create something that matters to people. Shade is evidence that you can't really guess or control how fans will react. As of typing this, I have collected over 50 pieces of fan art, half a dozen drag interpretations, action figure mods, and a picture of a cake one guy even designed, inspired by the character's visual motifs. Instead of shying away from the ardor, Marvel Comics requested that if we do this character, we do her right. Make her a real Marvel hero, with a fresh name and compelling backstory to match. After some back and forth, the drag queen formerly known as Shade would like to be known from here on out as simply Darkveil. If Kitty Pryde can have multiple aliases like Shadowcat and Spryte, so can Darnell Wade aka Darkveil.

It makes me happy that folks feel seen in pop culture because of Ms. Darkveil. I'm similarly grateful that Marvel took notice of the positive press, and allowed me to sneak her into March's Uncanny X-Men: Winter's End, where Darkveil continues her iconic streak with a '60s-inspired outfit emceeing Iceman's birthday party, and gets a Marvel Hero Spotlight after the letters column. Werk!