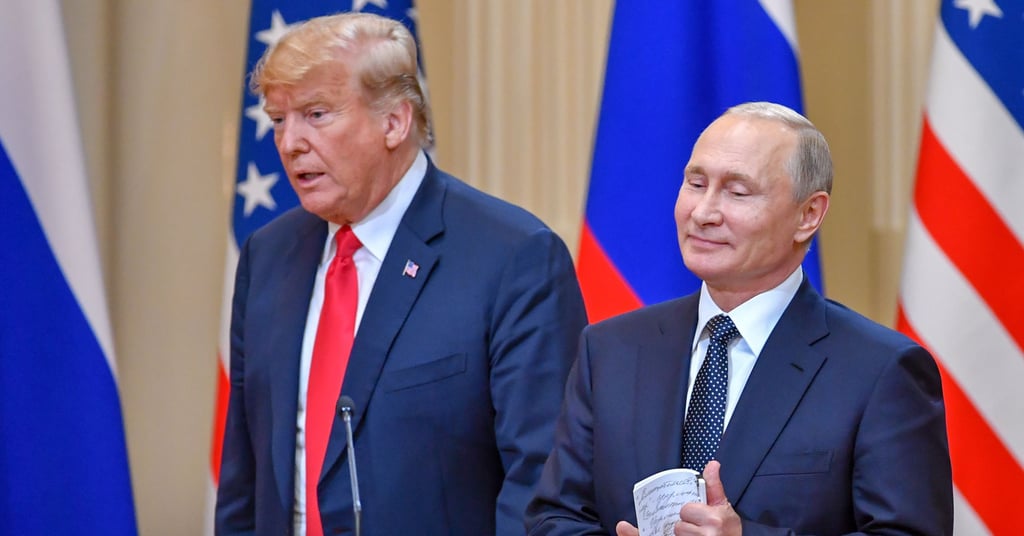 And Now, a Tired Gay Joke About Trump and Putin — Except We're Not Laughing

The New York Times opinion section shared a "funny" thought on July 17: what if US President Donald Trump and Russian President Vladimir Putin weren't just colluding to compromise the American democracy? What if they were also gay?! It's a tired joke that we've seen before, even with Trump and Putin as the subjects. Stephen Colbert insinuated something similar during a monologue back in May 2017. In 2016, a photoshopped image of Trump and Putin, shirtless and riding a horse together, made its way around the internet. This time, the tweet in question comes complete with a hard-to-watch cartoon and talks of the fantastical "forbidden romance" that might as well be playing out in a "teenager's bedroom."

In this episode of Trump Bites, Donald Trump’s not-so-secret admiration for Vladimir Putin plays out in a teenager’s bedroom, where the fantasies of this forbidden romance come to life. https://t.co/cWeQMuzWUz pic.twitter.com/4shBRkloot

Based on the words and the nature of the cartoon itself, it's clear the whole affair is meant to be satire. As luck would have it, the best kick-off to a counterargument comes in the form of a meme, which was sent to the NYT by Twitter user PrettyBadLeft. "Satire requires a clarity of purpose and target lest it be mistaken for and contribute to that which it intends to criticize," the woke meme states. Using this idea, the target is clear: the New York Times was attempting to humiliate Trump and Putin. But the purpose is a little murkier. The joke is that we could gaze upon Trump's decision to cozy up to a United States enemy with horror. We could interpret his actions as a direct threat to the notions our country was built upon. But these men aren't reprehensible comic book villains who have somehow escaped into this reality. They're just gay together.

As one might predict, the internet didn't take too kindly to the piece. That's because it's not a critique or satire of what we witnessed during Trump's time at this summit in Helsinki, Finland. As a matter of fact, you might say it's contributing to rhetoric the Trump administration (and its followers) are trying to spread: that gay people are evil. To drive the point home, we've compiled some tweets that help clarify the situation in a few more reinforcing ways. Ironically, some of them are actually funny!