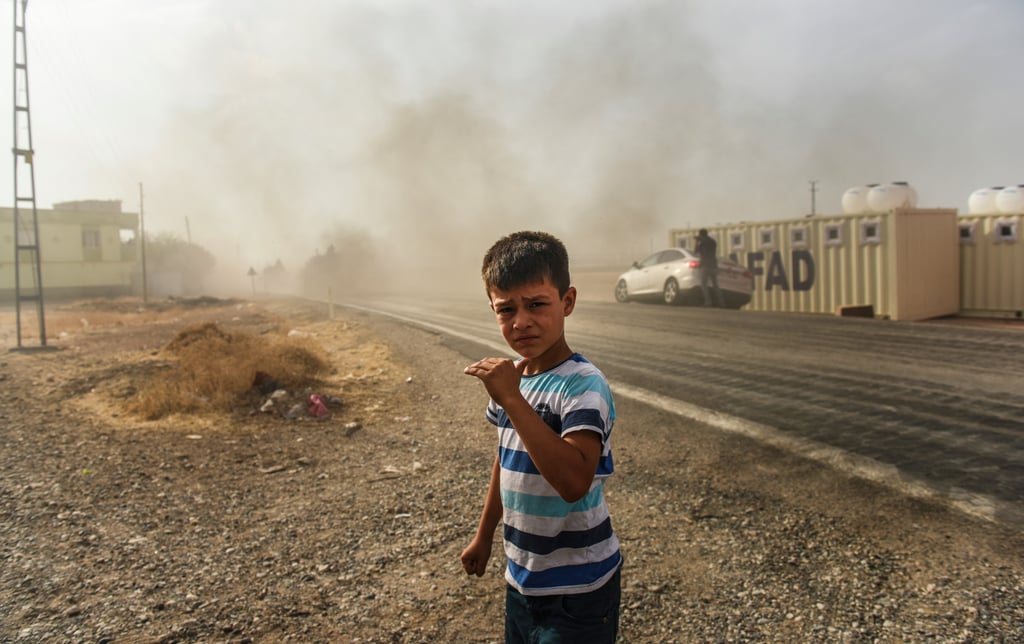 As the civil war in Syria enters its fifth year, the world watches while leaders attempt to solve the humanitarian crisis. Hillary Clinton and Donald Trump argued over the issue during the second presidential debate on Monday, thrusting Syria's devastation into the spotlight once more. Despite the discussion, however, thousands of Syrians continue to suffer.

The Syrian conflict is complex and involves three dominant factions on the ground, and the United States and Russia by proxy. Civil war erupted in the country during the Arab Spring uprisings in 2011. As Egyptians took to the streets in protest of their government, other Arab countries like Tunisia, Libya, Yemen, and Syria followed. As government forces grew increasingly more violent toward protesters, even opening fire on unarmed protesters, the opposition gradually took arms, and the country descended into civil war. President Bashar al-Assad, who has been in power since 2000, has refused to relinquish his reign over the country despite the immense human cost. John Kerry, the United States secretary of defense, even called for Assad and his allies to be investigated for war crimes this year.

Fighting between antigovernment rebels and the Syrian Army ravaged the capital city of Damascus and the country's largest city, Aleppo, by 2012. In 2013, the United Nations estimated over 90,000 people had been killed in the conflict; by 2015 that number had increased to over 250,000 people, according to the BBC. As Syria descended into chaos, the Islamic State's (ISIS) presence in the Middle East strengthened. ISIS entered Syria's battleground in 2013 and captured the Syrian city of Raqqa, complicating the conflict exponentially.

The Syrian people pay the ultimate price for this ongoing conflict.

Perhaps even more precarious is the involvement of global powers in Syria. The United States has been fighting ISIS in Iraq since it gained prominence in 2014 and drove Iraqi forces out of several cities. In Syria, the United States has also aligned itself with the predominantly Sunni rebels and blamed Assad for the horrific humanitarian crisis across the country. Specifically, the US provides limited military support to the rebel group National Coalition For Syrian Revolutionary and Opposition Forces — however, there are factions of rebels that the US does not support.

Then there's Russia. Assad asked the country to intervene under the guise that Russia would be fighting ISIS. Since 2015, when Russia entered the conflict, it has been bombing rebel-held territories while claiming ISIS was the target. To complicate matters even more, an American- and European-led coalition has also launched airstrikes on ISIS-controlled territories in Syria. That coalition consists of the United States, Britain, France, Germany, Australia, Italy, and the Netherlands. Russian forces have even come close to causing an international incident by attacking that coalition: they bombed an American and British outpost in Northern Syria in July.

As tensions continue to escalate in the region and a proxy war essentially transpires, Syria has also become a central issue in American politics, specifically between Clinton and Trump. Both candidates have offered opposing views on the conflict. Trump has praised Russia's supposed attacks on ISIS, and in the second debate, he disagreed with his running mate, Mike Pence, on the possibility of using military force against Assad's army. Clinton has called for military intervention in the region and an institution of a no-fly zone over Syria. Clinton's policy is markedly more hawkish than President Obama's. Rather than stationing troops on the ground in Syria and Iraq to defeat ISIS, Obama has called for arming and training some factions of rebels. And remember Gary Johnson's astoundingly bad "Aleppo moment"? The Libertarian candidate was unable to place what, let alone where, Aleppo was when asked by a pundit about the crisis on MSNBC.

The Syrian people pay the ultimate price for this ongoing conflict. Over 4.5 million people have escaped the war-torn country since 2011. Refugees have been pouring into neighboring countries, often risking their lives on the way, leading to another humanitarian crisis across Europe. Within Syria, over 6.5 million people have been displaced, and of that remaining population, 70 percent do not have access to water, according to the BBC.

As cease-fire agreements fail and Russian-led airstrikes ravage Aleppo, including humanitarian aid convoys, hundreds of civilians are dying daily. The images coming out of the country are harrowing. No one will ever forget the photo of an injured Syrian boy, Omran Daqneesh, as he sat covered with dust in an ambulance. These other pictures, taken in October and September 2016, illustrate just how tragic this civil war is and who it predominantly affects — innocent people.

Warning: some of the following images are graphic.

by Pallavi Bhadu 44 minutes ago