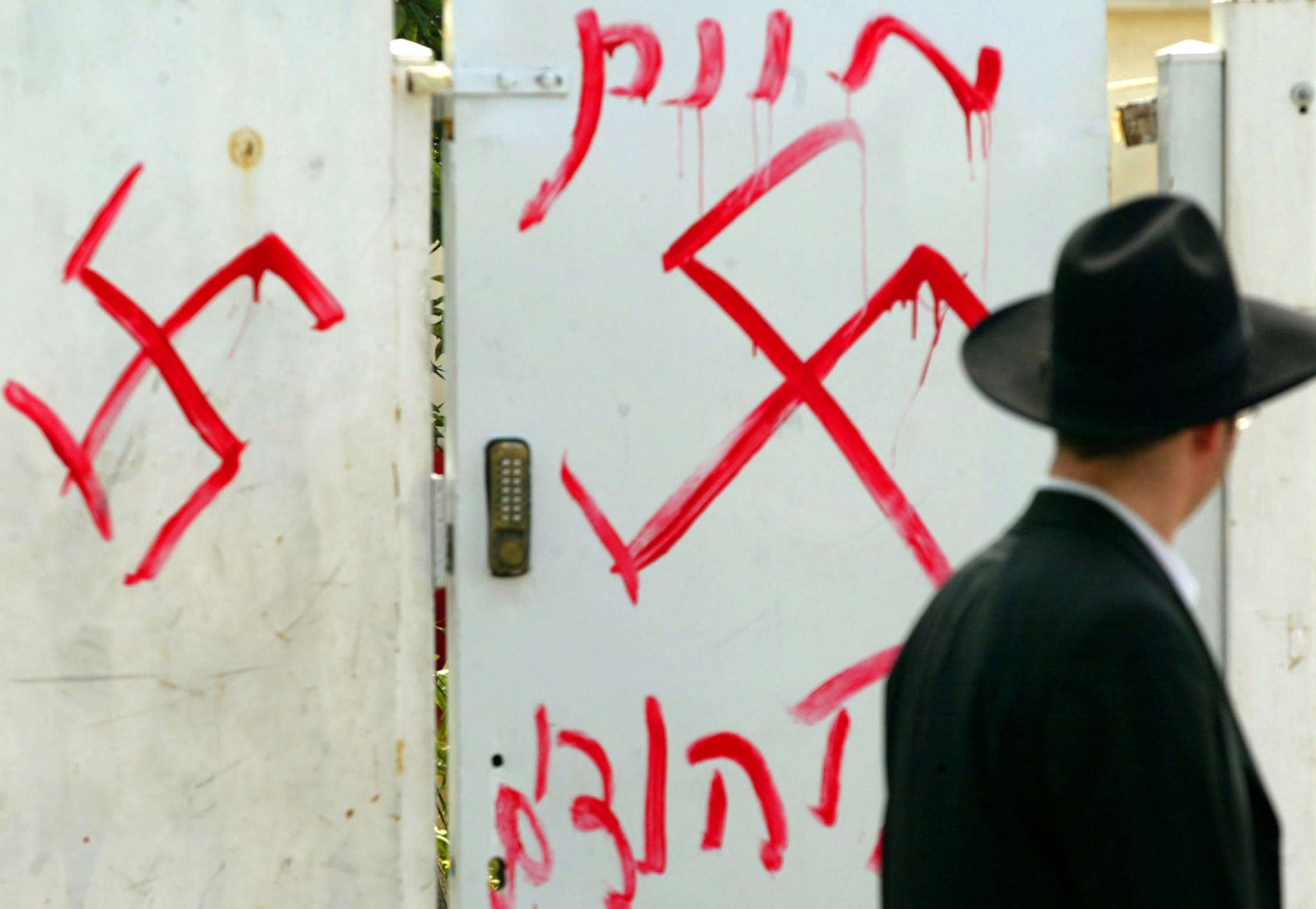 Nazi graffiti was sprayed on a synagogue near Tel Aviv, Israel, on March 5, 2006.

When I was 9 years old, my name and home address appeared on the hit list of two white supremacist brothers responsible for "among the worst acts of anti-Semitism in American history." These men, over the course of July 1999, firebombed my synagogue and two others, burned down an abortion clinic, and violently took the lives of two gay men.

I did not grow up in a small town or a rural area or even a place with few Jews. I grew in Sacramento, CA, the blue center of a blue state on the left-leaning West Coast. Hatred and bigotry rarely respect geography.

The bombing burned our library to the ground and damaged parts of our sanctuary beyond repair. My synagogue, Congregation B'nai Israel, is the oldest synagogue west of the Mississippi River, built to support the influx of miners during the Gold Rush. Our library, like many Sacramento landmarks, housed irreplaceable memories from California's Jewish — and secular — history.

At 9 years old, I didn't fully understand what was happening around me. Because my mom was the former president of our synagogue (the first woman ever to occupy the role), I was interviewed several times by the local news about how I was coping with the bombing. I remember it because we were sitting in the room in the house that no one ever used to go in. I was all dressed up and my socks were itchy. It was dark outside, and it was later than I was usually allowed to stay up.

When the police ultimately located the men responsible, they had a hit list of more people and places they planned to target. Because my mom had been a public representative of our temple and because I had spoken to the press after the bombing, our home address was on that list.

I remember knowing that someone hated me so much, they wanted to cause me harm. Why?

I remember police cars outside our house and my school. I remember being told over and over again to be careful and to pay attention and to not talk to strangers. I remember spending most of that Summer with my dad helping to sort through the ashes of the library. We were supposed to save anything that could still potentially be read. In a whole Summer, I don't remember finding a single salvageable book. And for those who have not experienced it, I assure you that the sight and smell of burned books does not erase itself from memory. But more than anything, I remember feeling confused and hurt and scared. I remember knowing that someone hated me, hated me so much they wanted to cause me, my family, my friends — all perfect strangers — irreparable physical and emotional harm. Why? Because we're Jewish. That's it. That's the only reason. It still doesn't add up.

Eventually, we rebuilt our library and our sanctuary; our temple had a whole generation of children who weren't there or didn't remember the attack. But I was and I do. This memory is the reason I study religion, the reason I now work for a religious organization focused on social justice for everyone and why I spent the last year in graduate school trying to understand and advocate for interfaith dialogue and cooperation. I need to understand why, or even more so, how. How can anyone feel this type of hatred? How can anyone knowingly cause other people this much pain? This is also the reason I haven't been sleeping much even two weeks after the election.

The past few weeks have been terrible. They have been terrible in a different way than any other time in my life has been terrible. Hate crimes (toward many groups, not just Jews) are on the rise, swastikas are being drawn on schools, and now, the alt-right is hosting neo-Nazi conferences mere miles from my front door. The other night, I had to watch CNN discuss whether or not I am a person.

These weeks have made me question one of my most cherished and foundational beliefs: that people are inherently good, and when given the chance, they will pick kindness and warmth over hatred and bigotry. This belief is at the very core of how I operate in the world. But this despair won't last. Because I won't let it.

Until recently, I hadn't shared this story with anyone in my life that hadn't been there to experience it firsthand. But now, the normalization of hateful and bigoted rhetoric by the Trump campaign and many (though certainly not all) of its supporters has freed me from my fear of speaking these things aloud. If they can yell messages of hate, I will yell louder with messages of love and acceptance.

If they can yell messages of hate, I will yell louder with messages of love and acceptance.

The point of this message is not that anti-Semitism is real (though it is) or that I think you should all take time to get to know people of other faith and belief traditions (though I do).

After my synagogue was firebombed, the whole community of Sacramento came together. In many ways, Sacramento became a better place to live than it was before. Everywhere you went, people displayed messages of support in their home and car windows. The Sacramento Convention Center filled up for a night of solidarity. My mom initiated the very first hate crimes task force to bring people together to better combat the targeting of minority groups and advocate for the interest of these communities to local government. This task force has since been replicated nationwide. (If you can't tell, I have a truly remarkable mother. She basically wrote the book on kicking ass and taking names.)

Similarly, there are things to celebrate today. People all over the country are mobilizing, speaking out, supporting each other, and doing kind acts for strangers so they know that someone cares. If you haven't joined Pantsuit Nation on Facebook, I highly recommend it. It's the first thing I read each morning and the last thing I read each night. In the UK, where hate crimes have also spiked in recent months (and in light of a contentious election), national Inter Faith Week recently concluded with its highest participation on record. However you may feel about safety pins, people are wearing them to show their willingness to defend and respect the rights of every person in this diverse nation.

I was lucky. My childhood memory of hatred is inextricably linked to the memory of love and tolerance and support. This is the opportunity we have now. We, too, can build a better world than we had before. Remember to get out there and hug the children in your life. Tell them they matter and deserve every opportunity for happiness. And if you have adults in your life that are hurting, tell them too. The only way we're going to get through this is together.

Even the darkest memories have rays of light. I hold on to this when I begin to lose my faith in humanity. This election has tested me, but I am determined to stay true to my belief in the goodness of people.

Healthy Living
I Decided to Fight Hustle Culture by Doing Less, and I'm Not Turning Back
by Ashley Broadwater 6 hours ago

Digital Life
I Started Putting My Phone in a Different Room at Night, and It Really Improved My Mental Health
by Caitlin Gallagher 8 hours ago