Selfies Can Be Stupid

Take a cue from this guy who tried to take a selfie while a train passed a "safe" distance behind him. The conductor wasn't amused and kicked him in the head. Lesson = learned. 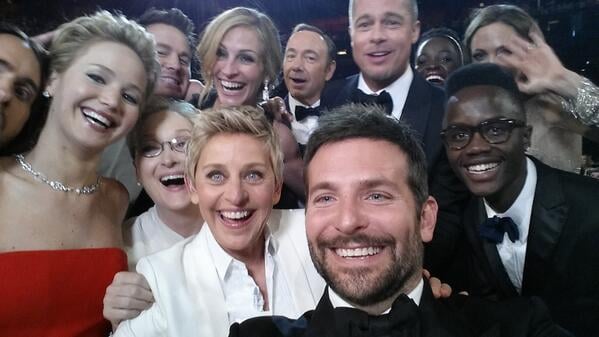 Source: Twitter user TheEllenShow
Look, we loved Ellen's celebrity-packed Oscar selfie as much as the next person. But we lost a little faith in humanity when we found out it was (probably) a Samsung product placement.

Then, Samsung did it again when Boston Red Sox player David Ortiz took a selfie with Barack Obama as part of another promotion, and the White House threatened to end all selfies with the president.

What an honor! Thanks for the #selfie, @BarackObama pic.twitter.com/y5Ww74sEID

Is nothing sacred anymore?

I sent my dad this pic and he said "luca told me to tell u, u made his oatmeal lumpy" lol he is cute when he's mad! pic.twitter.com/yG87UNGZ

Remember that time Geraldo Rivera tweeted a shirtless selfie that no one wanted to see, ever? Or when Hilary Duff terrified her baby because of her snap? Or, better yet, when Kim Kardashian tried to take a selfie with an elephant and it totally backfired? Maybe it's a sign that selfies have gone too far.

These days, we've got selfie apps, selfie remotes, and even — brace yourselves — a two-way selfie mirror that takes your picture and posts it to Twitter. Sheesh, people.

On a serious note, some people get addicted to selfies — like Danny, a teenager in the UK who got so obsessed with taking the perfect one that it drove him to attempt suicide. Sure, selfies can be silly, but when they lead to major self-image issues, it's time to reassess.

Let's be honest: a lot of the selfies out there are braggy and vain. How many times do we need to see Bieber shirtless . . . on vacation? (Yeah, millions of fans will disagree with that one.) People are even taking duck-face selfies at funerals. Gross.

Actually, Sometimes Selfies Can Be Great