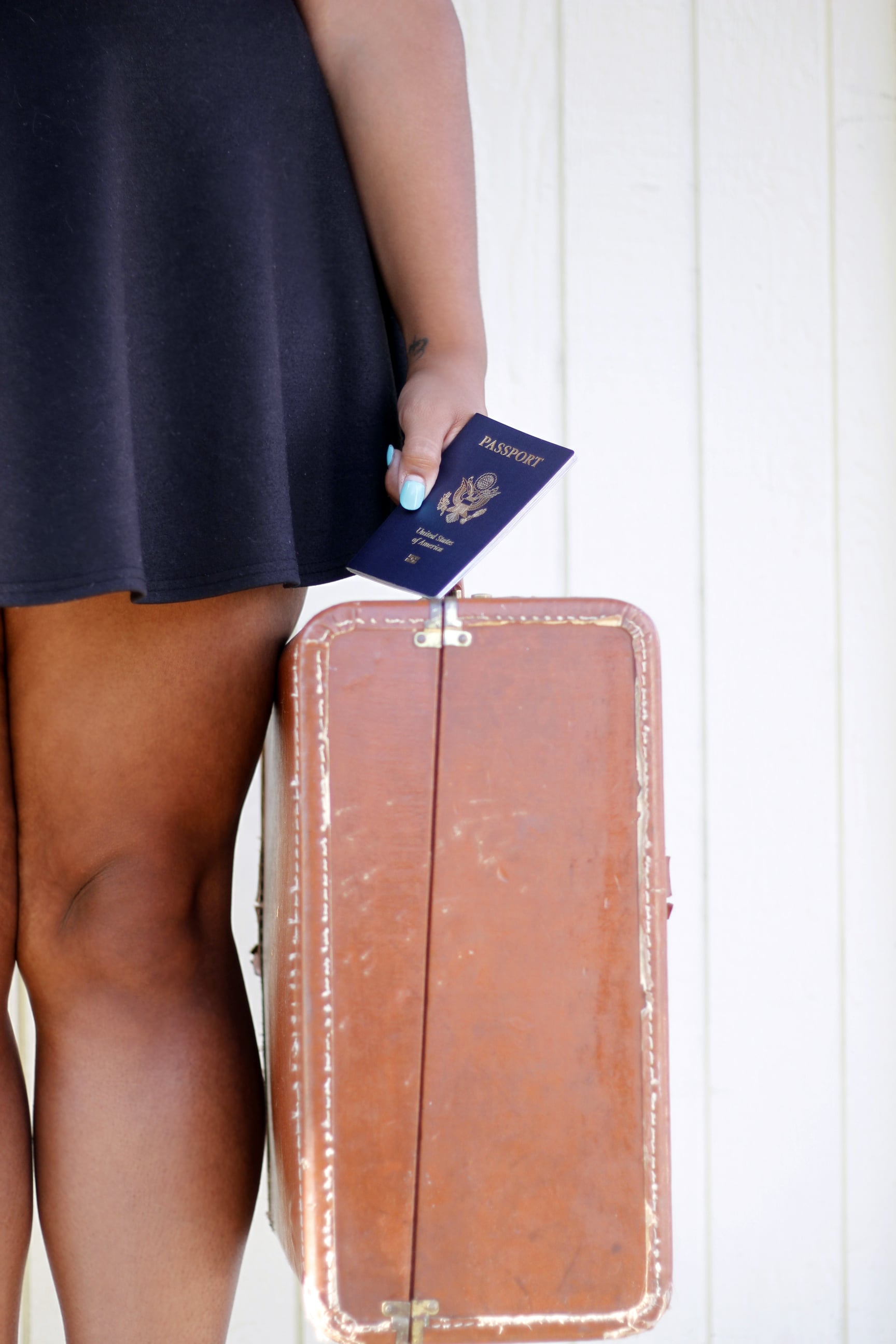 "I love you, but I think when our lease is up next year, we might have to start living apart for a while," I said nervously to my boyfriend as I packed up my suitcase.

No, this wasn't a breakup, but a discussion about how we should figure out our living arrangements when I wanted to become a full-time digital nomad.

For as long as I can remember, I've thought that the idea of living out of a suitcase was one of the most romantic, adventurous, incredible things one could do with their life. The idea of selling all your possessions and only surviving off what could fit inside a carry-on bag was what I figured was calling for me after a childhood of never traveling or going anywhere outside of my home state.

And in my early adulthood, I had finally done it in a lot of ways. In college, I packed up everything and went off to study abroad in England for three months and lived off what I had brought with me (while also purchasing a huge amount of clothes from the local Primark). I moved to Los Angeles for a few months after graduating, with nothing except what could fit in my car as I headed from Seattle down the West Coast to my new home (all while picking up a multitude of home goods and appliances that I thought an adult should own). And then a couple of years later, I went back to the UK and did it again, except this time for eight months while doing a creative writing program in London (all while taking weekly shopping trips down Oxford Street, which soon filled up my closet).

In my naive mind, I thought I had conquered the nomadic lifestyle. I could move somewhere temporarily with just the small amount of things I owned and make a life for myself. And, truthfully, I sort of could. I'm great at starting anew. One of my favorite things in the world is giving away everything I own and fitting the most important items into my bags and heading off to a new city. There's something beautiful about forcing yourself to struggle with all the things that come along with setting up a life, because it feels more worth it at the end when you overcome all those difficulties.

But after all these moves in my early 20s, I figured I needed to grow up, and I made the biggest move of all and settled down in New York City with the hopes that it would last longer than a three-month stay. And in the past two-and-a-half years, I've made a home with my boyfriend in our tiny but expensive one-bedroom apartment in Brooklyn. But, of course, in the time I've spent "settled down," my nomadic spirit has still wandered and wondered how I could make my life one of minimalism and fulfill my inner transient nature.

I've been lucky since moving to New York City to attain jobs that were quite flexible with working remotely, and I took advantage of this by planning trips that would allow me to go abroad multiple times a year. But two- or three-week trips are always temporary, and that was starting to get to me. I didn't like the idea of packing up and coming home at the end. I wanted to buy a one-way ticket and not have an end date to my adventures. As spoiled and millennial of me as this sounds, I just didn't want to have a home with responsibilities and to pay rent for an apartment I never wanted to be at.

I sat my boyfriend down and told him all about my wild thoughts and how depressed I was at the thought that New York City was my official address for the foreseeable future and that I didn't want anything holding me down. Most people would probably think their partner was trying to dump them with all the idealistic, independent things I was saying, but thankfully my guy is incredibly understanding and knew that this was not the case. I adore him, and I am not about to throw four-and-a-half years of a relationship out the window just because I am flighty. We just needed to figure out how to make us both happy. He has commitments in the city that he can't just up and leave from for a year, but he also didn't want to stop me from taking advantage of my youth and heading off on a year-long vagabond journey in which I only lived off whatever I could stuff into my backpack.

And with his blessing, I decided to give this plan a few test runs to see how I might handle it. Over the Summer, I packed up my bag and flew home to Seattle to spend time with my family. I only bought a one-way ticket, with no idea of exactly when I might return to him. I was ready to spend time around the Pacific Northwest, visiting friends and just exploring parts of the West Coast I hadn't yet seen. However, around the one-week mark, I was starting to miss not only my love but also many of the items in my closet I hadn't brought with me (if you couldn't tell, I have a shopping and clothes addiction). And getting daily texts from my boyfriend about how much he missed me didn't help my missing him. I decided to stay only three weeks before returning to Brooklyn.

I've learned it's all about finding a balance.

Defeated with the thought that I had maybe turned into my worst nightmare of becoming the opposite of an independent woman who doesn't need to constantly be around her boyfriend, I was determined to test my abilities to be away from him for an extended period of time and to pack my bag in a way that made me confident with the choices I made to lessen my need to shop.

A month later, I was off to Europe for two weeks and then to Southern California for a week-long company retreat. This would give me a good chance to test the nomadic thing again by moving around a lot with a suitcase and seeing if I could handle this lifestyle. And apparently everything that could go wrong went wrong in the span of three weeks.

My flight was so delayed that I arrived jet-lagged, which threw me out of whack for the entirety of the journey. It seemed that every hostel I stayed in was determined to put me in a room with the loudest, rudest people. My face began breaking out in acne like I'd never seen before. I caught a nasty cold, so my body was not happy at all. A dormant cold sore also decided to suddenly appear in the midst of all this. And to top off all the fun, my eye started twitching, which threw me into a WebMD spiral, thinking I had a brain tumor. I also majorly failed at trying to do with what I arrived with in my backpack. I ended up at Primark every single day and bought so many new clothes that I had to buy a suitcase to put everything in to haul back to America with me because I'm not as minimalistic as I had hoped.

And then, of course, there was the fact that I missed my boyfriend so much and all I wanted was for him to be there with me. I had this big idea that I was this forceful woman to be reckoned with who didn't need to have someone with her and could successfully go off and not be held back by whatever she had left at home, be it human beings or objects. But my romantic ideals did not seem to live up to what I could personally handle. While I love the idea of going off for a few weeks at a time to explore a new place, there's no way I could just up and leave my sweetheart and all my belongings for an entire year.

There are brave people out there that I admire so much who have no ties at all and can just go off and be their best selves on the road with a minimal amount of things they own. And then there are also people who do have people they care about back home or even a big house with lots of things, but they can still separate themselves from it in a way that I can't seem to do yet. And there are the lucky few who found a partner who is ready to give up everything and jump on a plane with them without worrying about commitments. Sometimes I wish my guy were a bit more of the latter, but he has his own dreams I don't want to shatter by making him drop his artistic pursuits to follow me around the world.

I've learned it's all about finding a balance. As a headstrong 90s kid who grew up thinking I would never let a man dictate my life choices, and as a dreamer who lets her whims get away from her sometimes without thinking about the realities of the situation, I am glad as a mid-20-something I have gotten a chance to experience some of the things in life I only ever imagined as a child and to figure out what the best course of action is for me.

I know that my love for fashion makes living out of a suitcase full time a bit difficult, that my body can betray me and make an adventure into a nightmare, that being in the presence of my boyfriend more often than not is a major priority to me, and that making us live separately in the future just to save rent money would be more sad than practical. But that's the balance I've figured out after a lot of testing through experience, and each person has to find their formula for bliss . . . and for some, maybe that truly is getting down to the few essentials that can fit snuggly in a carry-on bag. In the meantime, that's not exactly how I'll have to do it, and that is 100 percent OK with me.

Image Source: Samantha O'Brochta
Why Living Out of a Suitcase Isn't as Romantic as It Sounds  originally posted on POPSUGAR Smart Living
Personal EssayTravel