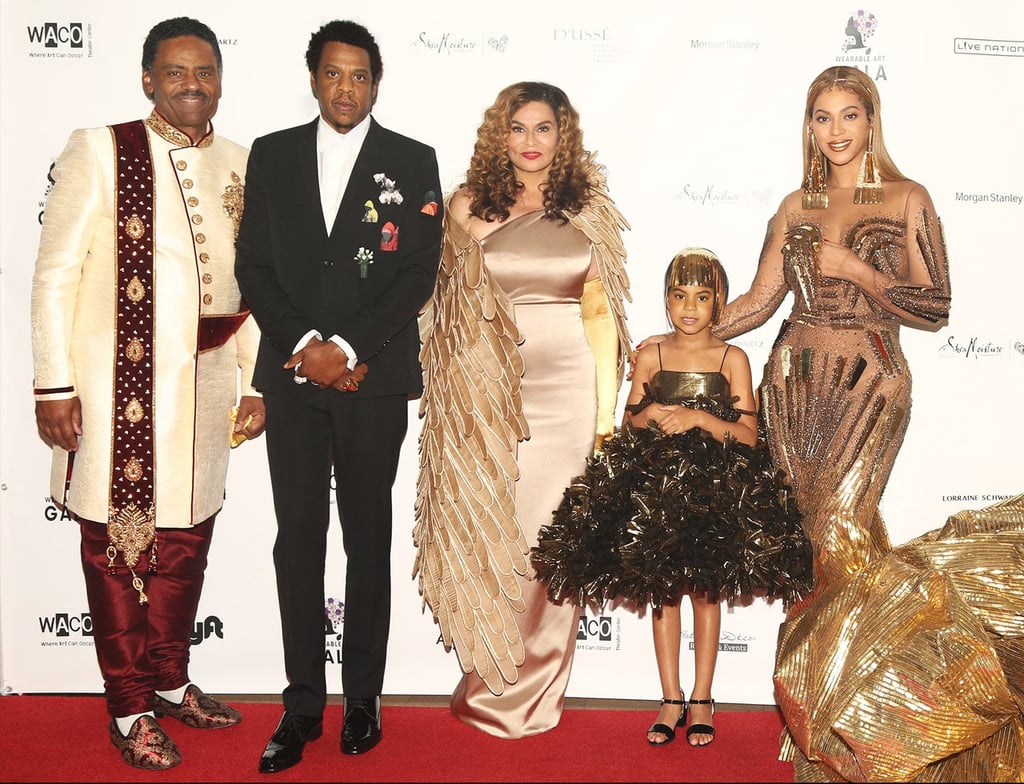 The second annual Wearable Art Gala was a family affair for the Knowles-Carters. Beyoncé, JAY-Z, and Blue Ivy were in attendance at the WACO Theater in LA on Saturday night, where the Lemonade singer was honored for her humanitarian work. The swanky gala, organized by Bey's mom, Tina Knowles, and her husband, Richard Lawson, was also attended by JAY-Z's mother, Gloria Carter, who was given the Everyday People Award. Gloria also received a touching tribute from the rapper himself. "She raised four kids, and she did the best job with me," he joked.

Beyoncé received the 2018 WACO Theater Humanitarian Award and became visibly emotional while delivering her acceptance speech. Before taking to the podium, the mom of three was greeted by Hannah Brammer, a 17-year-old fan born with brittle bones who has met the singer at concerts before. Bey also got a special shout-out from BFF and former first lady Michelle Obama via a prerecorded message, which was played on screen.

The dress code for the evening was "from WACO to Wakanda," inspired by the gorgeous setting in Black Panther, and the event featured an auction of artwork to raise money for a nonprofit art and performance complex. At one point, Blue, who wore a gold wig, completely upstaged her famous parents, bidding $17,000 on an acrylic painting of a young Sidney Poitier. JAY-Z attempted to stop her by taking away her paddle, but it didn't work. Blue bid even higher at $19,000.

Unfortunately, she lost out on the piece to director Tyler Perry for a cool $20,000, Vanity Fair reports. That doesn't mean the adorable 6-year-old left empty-handed, though. Blue bid $10,000 on another piece made of deconstructed law and medical books and took home the prize like the true boss that she is. The moment was too cute to miss and has since gone viral online. Keep reading to see more pictures and videos from the Knowles-Carters' heartwarming night out.