I JUST VOTED IN MY STATE OF FLORIDA!!!!!!!! ELECTION DAY IS NOVEMBER 6 AND EARLY VOTING GOES TO NOVEMBER 4. GO TO VOTE.ORG TO FIND YOUR NEAREST POLLING PLACE, THIS WEBSITE’S INFORMATION IS SO CLEAR AND EASY TO UNDERSTAND. I AM SORRY FOR THE CAPITALS, I JUST FEEL REALLY EXCITED THAT I JUST VOTED BECAUSE I FEEL LIKE IM TAKING MY FRUSTRATION AT THE INJUSTICES THAT HAPPEN IN OUR COUNTRY AND TURNING IT INTO ACTION!!! EVERY SINGLE ONE OF US CAN TURN THOSE FEELINGS INTO ACTION WHEN WE SHOW UP TO VOTE. ONE VOTE CAN MAKE A DIFFERENCE. WE CAN CONTRIBUTE AND HELP WRITE THE STORY OF OUR COUNTRY JUST BY TAKING A FEW MINUTES OUT OF OUR DAY TO VOTE!!! ALSO ITS MY GRANDMAS FIRST TIME VOTING IN THE UNITED STATES AND SHE DID HER RESEARCH AND PREPARED HERSELF AND WE ARE ALL FEELING SO GOOD !!! LETS. GOOOO. LETS VOTE! ➡️➡️➡️➡️➡️➡️➡️VOTE.ORG.

Ever since we entered midterm election season, celebrities have been encouraging fans and followers to get out and vote. Oprah Winfrey has been going door to door campaigning for Stacey Abrams, a candidate in the race for Georgia's governor; Barack Obama made a PSA prompting people to cast their ballots; and even Taylor Swift — who had remained mum about her political views practically throughout her entire career — recently broke her silence and urged people to support Tennessee Democrat Phil Bredesen.

Now that Election Day (Nov. 6) is finally here, many stars are putting their words into actions and showing they're not just all talk. From Camila Cabello to Ava DuVernay, read on to see some of the famous faces who are showing off their "I Voted" stickers with pride. 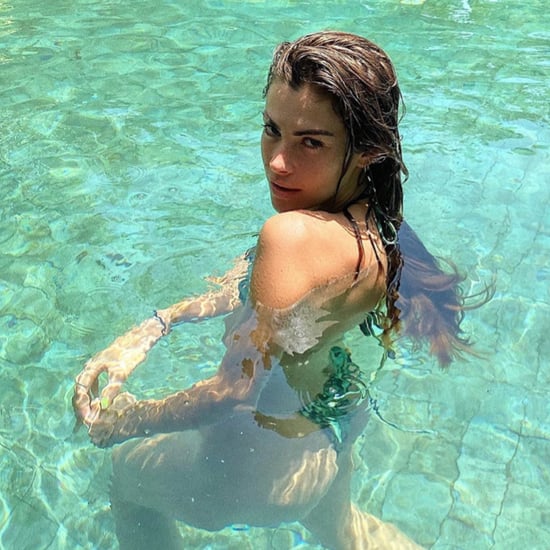 Celebrity Instagrams
Sorry, but the Rose Family Have Nothing on Eugene, Dan, and Sarah Levy's Real-Life Bond
by Monica Sisavat 15 hours ago