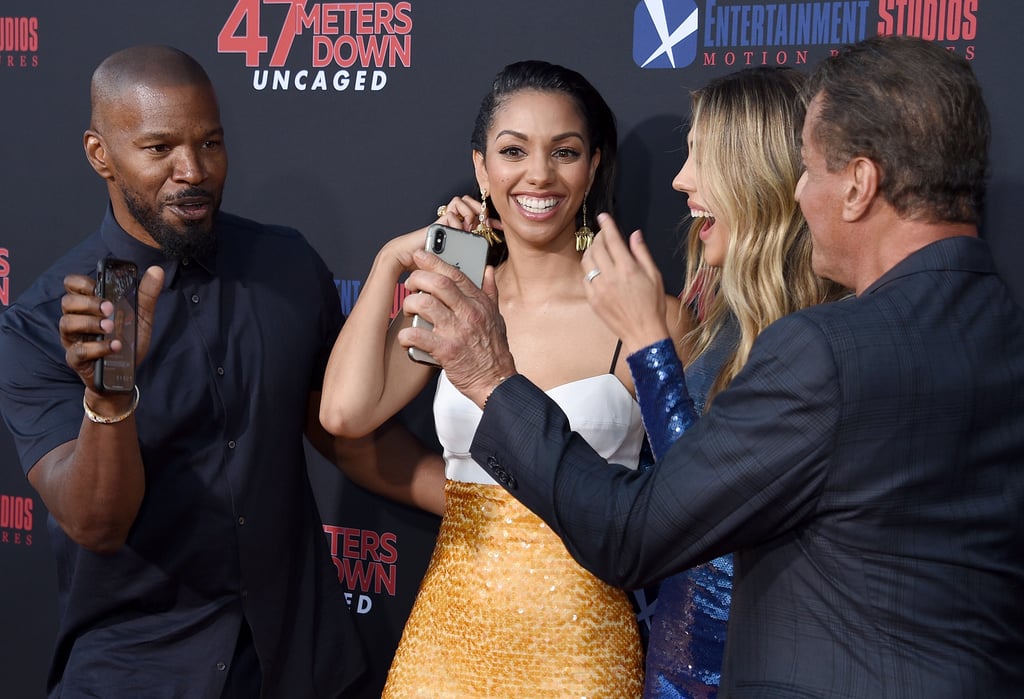 Jamie Foxx and Sylvester Stallone played supporting roles on Tuesday as they cheered on their respective daughters, Corinne Foxx, 25, and Sistine Rose Stallone, 21, at the LA premiere of 47 Meters Down: Uncaged. Although Jamie and Sylvester are Hollywood veterans, they gladly gave their daughters the spotlight while they posed for cameras and whipped out their phones to document the big night. The movie marks Corinne's big-screen debut, as well as Sistine's. Also in attendance was Sistine's mother and Sylvester's wife, Jennifer Flavin.

After watching her performance, Jamie took to Instagram to sing Corinne's praises. "As soon as the movie started and I saw my baby on that screen . . . my nerves Became pure adrenaline . . . and my fear turned into absolute Pride," he wrote in a heartfelt post.

In the film — which hits theaters on Aug. 16 — Corinne and Sistine play two of four teenage girls who find themselves trapped in the midst of a great white shark hunting ground while on a school trip. Thankfully, the two actresses were safe on land and out of harm's way at the movie premiere. Keep scrolling to see more pictures of the famous families gathered on the red carpet!

Kylie Jenner
While We're Wondering If Kylie Jenner and Travis Scott Are Back On, Let's Discuss This Sexy Vintage Dress
by Yerin Kim 2 hours ago

Celebrity Couples
Bo Burnham Has Been Dating Lorene Scafaria Since 2013, and Their Romance Is Too Cute
by Grayson Gilcrease 1 day ago