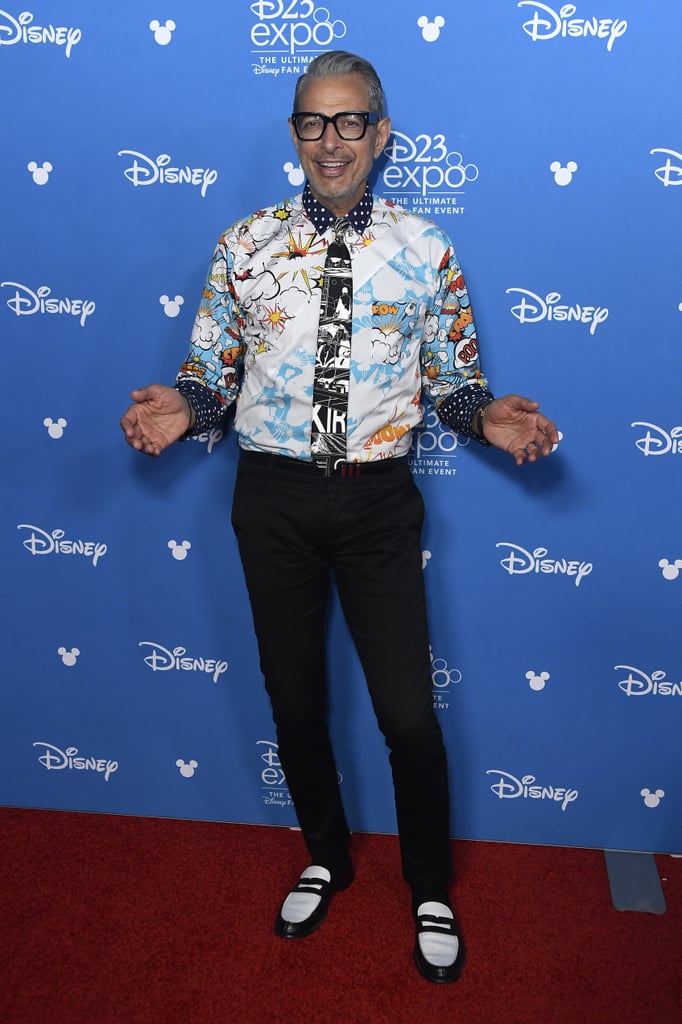 Jeff Goldblum is a Hollywood gem, and his Friday appearance at Disney's D23 convention in Anaheim is proof of that. The 66-year-old actor attended the event to promote his upcoming Disney+ show The World According to Jeff Goldblum, which will premiere on Nov. 12. While walking the red carpet, Jeff caught up with Variety to discuss the series, as well as other happenings in the Disney sphere. And because he's full of so much personality, every second of his interview was both intriguing and hilarious.

When asked if he's singing the theme song for his show — which will follow him as he learns all about his personal interests and obsessions — he admitted that he isn't. But that didn't stop him from belting a tune anyway (and his vocals are pretty darn good). The hilarity didn't stop there, either. After learning that Halle Bailey is starring in Disney's live-action version of The Little Mermaid as the first-ever black Ariel, he commended the 19-year-old star, saying, "I salute her, I sit at her feet, I wash her feet, I drink the water she bathes her feet in," he said. "I went too far, I apologize."

Jeff also had a rather passionate reaction after hearing Spider-Man might not be a part of the MCU — a franchise he appeared in as Thor: Ragnarok's Grandmaster. I would try to describe what that reaction exactly was, but you really just have to watch the interview for yourself to truly understand it. Look ahead to view clips of his chat with Variety, then check out more photos of him at D23!

Red Carpet
Serious Question: How Do We Become Friends With the Cast of Harlem?
by Monica Sisavat 2 days ago

Zendaya
It's No Venomous Spider, but the Back of Zendaya's Dress Can Still Bite
by Perri Konecky 4 days ago

Fashion News
Dua Lipa, Rochelle Humes, and More of the Best Dressed at the 2021 British Fashion Awards
by Kara Kia 5 days ago