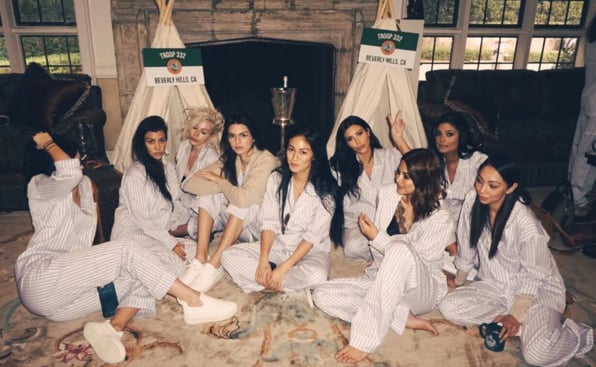 Kim Kardashian is expecting her second child with husband Kanye West, and on Sunday, she celebrated the baby's upcoming arrival with a Troop Beverly Hills-themed baby shower. Kim posted an adorable picture of their "troop leader," North West, and her sisters Kourtney Kardashian and Kendall and Kylie Jenner took to Instagram to share pictures of themselves lounging around in matching striped pajamas and drinking hot chocolate. Also in attendance was Khloé Kardashian, who has reportedly been by the side of her husband, Lamar Odom, since his hospitalization earlier this month.

Kim's baby shower came just a few days after she spent Wednesday ringing in her 35th with family at a surprise bash and attending Balmain designer Olivier Rousteing's over-the-top birthday extravaganza in LA on Friday. Take a look at the family's snapshots, then check out Kim's many pregnant appearances from throughout the year.

Billie Eilish
Billie Eilish Designed Clothing That Celebrates Sustainability: "This Is So Important to Me"
by Karenna Meredith 4 hours ago

Kylie Jenner
Kylie Jenner Gave Her Dog a Hilariously Human Name; See the Photos of Her Latest Addition
by Murphy Moroney 1 day ago