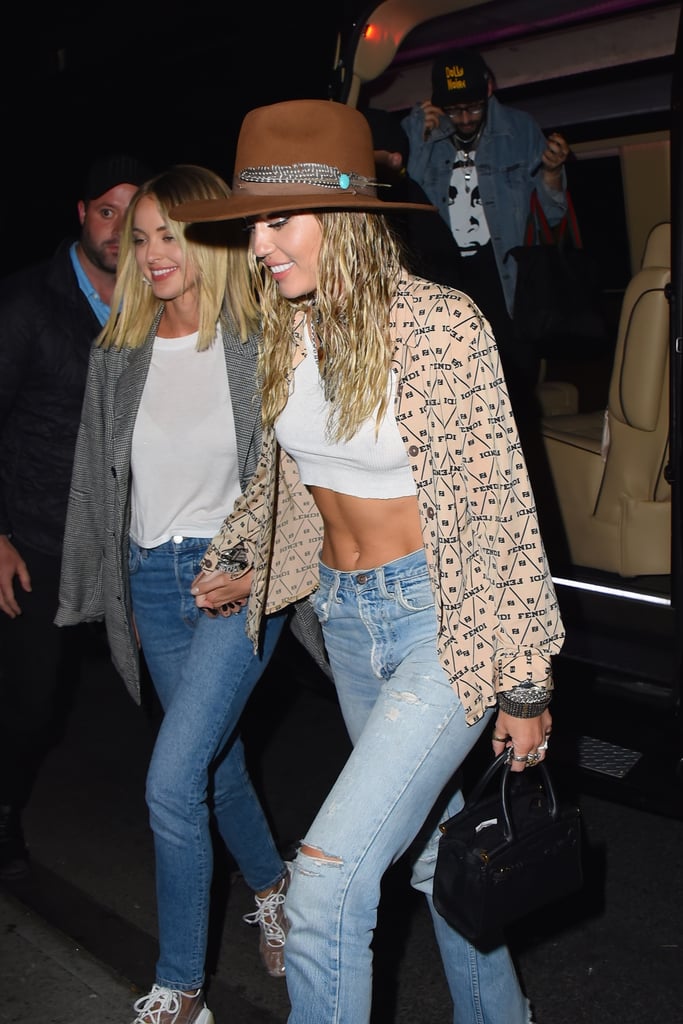 Miley Cyrus Steps Out With Kaitlynn Carter (and Her Mom!) After an Emotional VMAs Performance

Miley Cyrus and Kaitlynn Carter may not have walked the red carpet at the MTV VMAs on Monday night, but the new couple could hardly contain their smiles while stepping out together later in the evening. During the award show, Miley took the stage to perform her emotional new single "Slide Away" for the first time, but not before receiving some sweet support from Kaitlynn, who hung out backstage during the star-studded event. Once the show wrapped, Miley changed out of the backless minidress she wore on stage and into a casual crop top, jeans, and hat before heading to an afterparty in New York with her new fling. The two were spotted holding hands and looking rather smitten on the streets alongside Miley's mom, Tish Cyrus.

Just last week, Miley spoke out about her recent breakup with ex Liam Hemsworth in a series of candid tweets that addressed cheating rumors, her scandalous past, and what ultimately led her to bid adieu to her decade-long relationship with Liam. "I am the healthiest and happiest I have been in a long time," Miley tweeted. "You can say I am a twerking, pot smoking, foul mouthed hillbilly but I am not a liar. I am proud to say, I am simply in a different place from where i was when I was a younger." Well, it certainly looks like Miley and Kaitlynn are leaving their pasts behind and enjoying their newfound romance! Ahead, see all the photos of the stars looking like two peas in a pod post-VMAs.