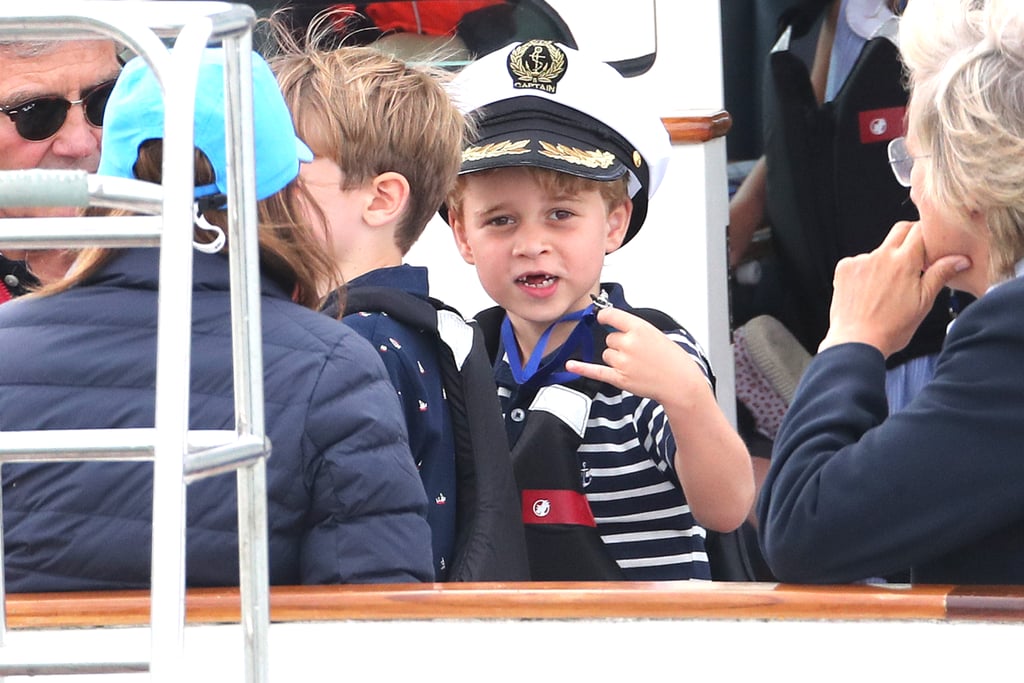 Kate Middleton and Prince William had the best cheerleaders supporting them as they competed in the King's Cup regatta on Thursday: Prince George and Princess Charlotte! The tiny royals joined their parents on the high seas, watching the charity boat race unfold from afar on another sailing vessel with their grandpa, Michael Middleton. George, who recently celebrated his sixth birthday, showed off his missing two front teeth and wore an adorable sailor's hat for the occasion. Meanwhile, Princess Charlotte was as cute as can be, donning a nautical blue and white striped dress under her life jacket and grinning for the cameras. They sure know how to stay on theme!

Kate and William launched the King's Cup this year to raise funds and awareness for eight of their royal patronages, including Child Bereavement UK and The Royal Foundation's Early Years program. Originally scheduled for Friday, the regatta was moved to Thursday at the last minute due to the fickle British weather, but that didn't stop the Duke and Duchess of Cambridge from putting their game faces on and getting swept up in the competition. Ahead, see photos of Prince George and Princess Charlotte looking positively adorable while cheering on their mom and dad — and be sure to keep reading for photos of Charlotte being silly with Kate Middleton!

Related:
101 Photos of the Youngest Royals Hanging Out Together and Having a Wonderful Time
Previous Next Start Slideshow
Princess CharlotteThe RoyalsPrince GeorgeMichael MiddletonThe British Royals