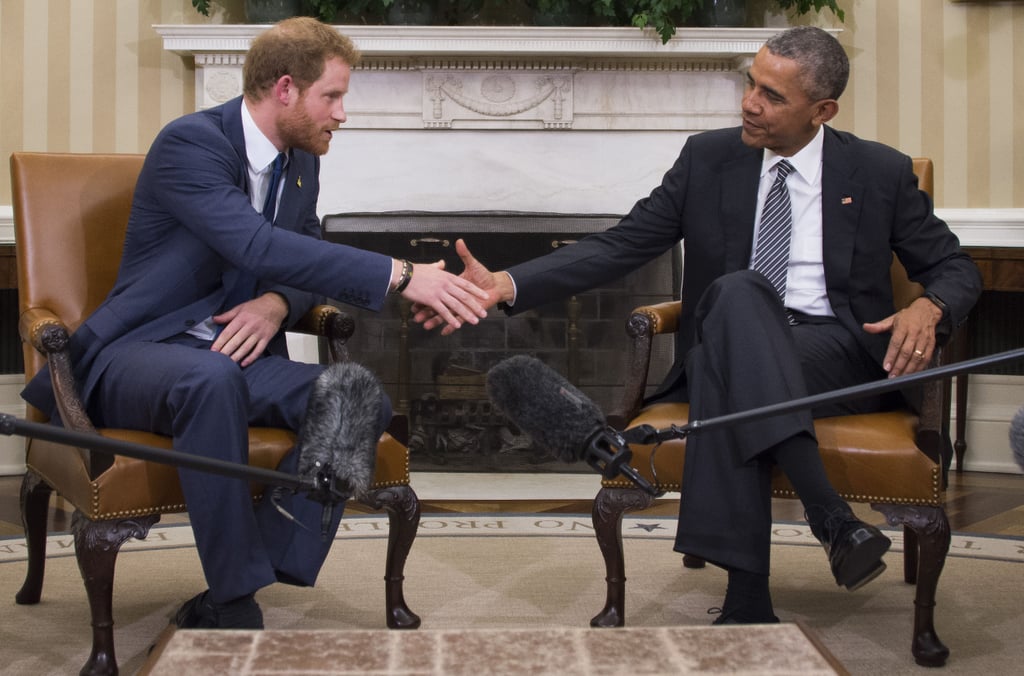 Prince Harry was in good company with First Lady Michelle Obama and Vice President Joe Biden's wife, Jill, at the Joining Forces Invictus Games in Fort Belvoir, VA, on Wednesday. He donned a blue suit and kept his handsome streak going, showing off more sexy facial scruff. The event, at which Harry took the stage and spoke about his tours to Afghanistan, was organized to promote next year's Invictus Games, a multisport competition that brings together wounded veterans to participate in a series of games.

That same day, Harry paid a visit to the White House and met up with President Barack Obama for the first time to discuss his participation in the big event. Obama later told reporters, "It is a great pleasure to welcome His Royal Highness Prince Harry here to the Oval Office. I've had an opportunity to spend a lot of time with so many of his family members, but this is the first time that we had a chance to talk directly." He then jokingly added, "He has gotten to know Michelle very well."

Harry's latest public appearance comes shortly after he spent Monday at BAFTA's London headquarters with his brother Prince William and his wife, Kate Middleton. Later that day, they attended the world premiere of the new James Bond film, Spectre, at the Royal Albert Hall, where the trio turned heads on the red carpet. Read on to see more moments from Harry's latest outing, then check out all the times his good looks made you do a double take.

Celebrity News
Barack Obama Celebrates 30 Years With Michelle Obama: "I Won the Lottery That Day"
by Chanel Vargas 2 days ago

by Lindsay Kimble 48 minutes ago