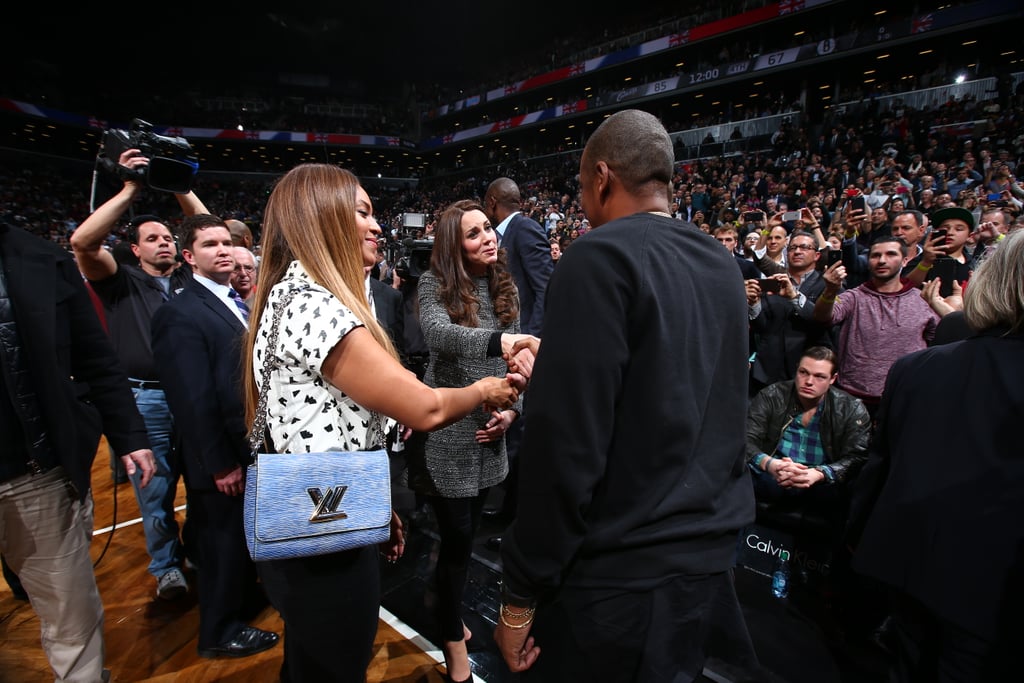 British royalty met music royalty when the Duke and Duchess of Cambridge made their way to Brooklyn, NY, on Monday for a game date. While the Brooklyn Nets played the Cleveland Cavaliers at the Barclays Center, Prince William and Kate Middleton sat courtside — and so did Beyoncé and Jay Z, who at one point met with the royals on the court. Will and Kate also posed for pictures with global ambassador Dikembe Mutombo and NBA commissioner Adam Silver, and the couple's representative said they hope to foster a relationship between The Royal Foundation, the NBA, and United For Wildlife, Prince William's wildlife conservation foundation.

It was a night of exciting meetings for the duke and duchess, who also linked up with LeBron James. On Sunday, LeBron said he's honored to play before the royals, saying, "People like them are only in books growing up. And to hear that they're coming to town to see me play and they want to see me do what I do best, it's a huge honor."

For her part, this isn't the first time Kate has shown her sporty side — the athletic royal has had plenty of active moments over the years, and she and Will were seen in the stands at Wimbledon, at the Commonwealth Games, and at the London Olympics back in 2012. The basketball date comes after a busy day for the couple; after their stylish arrival in NYC on Sunday, Prince William jetted to Washington DC to meet with President Obama while Kate spent time with local children in the Big Apple. Take a look at all the cute pictures from their Brooklyn night out, and then find out more about Will and Kate's visit to NYC!