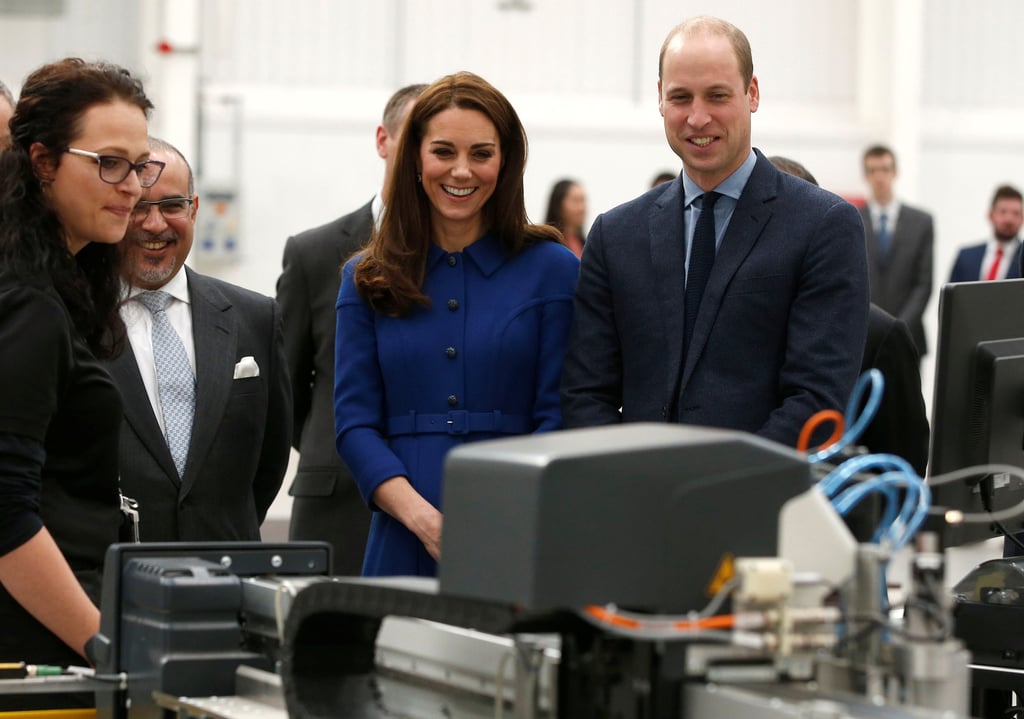 You probably don't need another reason to love Kate Middleton and Prince William, but in case you do, their recent royal outings are a couple more to add to the list. On Nov. 14, the duo were all smiles as they headed to South Yorkshire, England, to visit the McLaren Automotive Composites Technology Centre and the charity Centrepoint in Barnsley to help prepare food. Kate rocked a blue A-line coat dress and pumps while William wore a blue suit.

During their visit to the McLaren Automotive Composites Technology Centre, Kate and William talked to the new employees and learned about how the expansion of McLaren will create new jobs for the area while the company continues to encourage children to get more involved in science-based learning and careers. At Centrepoint, a charity the late Princess Diana was a patron of, they cooked up some meals for young people in the area, which involved mixing Omero's Red Pepper and chorizo soup and slicing bread.

The appearance comes after an occupying few days for the couple. On Nov. 11, they reunited with Prince Harry and Meghan Markle as the royal fab four to attend the Remembrance Day service with the rest of their family. We also got a rare look at their adorable youngest baby boy, Prince Louis, in the newly released royal family portraits that were taken in honor of Prince Charles's 70th birthday. Evidently, the Duke and Duchess of Cambridge are keeping busy.

Look ahead to see more photos of Kate and William during their day out at McLaren Automotive Composites Technology Centre and Centrepoint.

Related:
Kate and Will's Cutest Moments From 2018 Will Slap a Huge Smile on Your Face
Previous Next Start Slideshow
The RoyalsKate MiddletonPrince WilliamThe British Royals