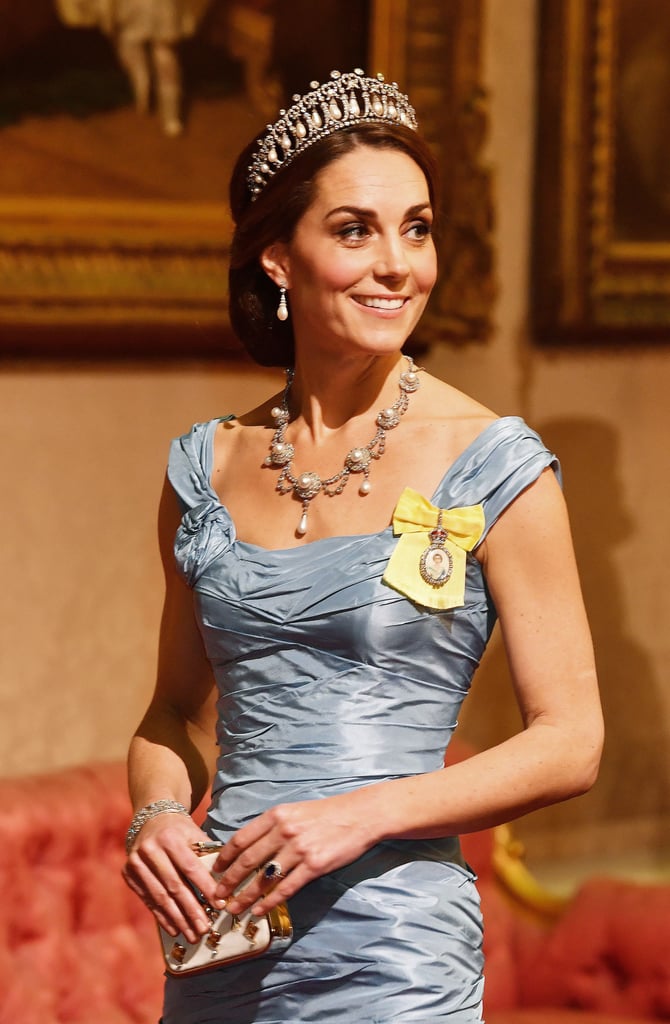 No rest for the royals! As Prince Harry and Meghan Markle continue their tour of Australia, Kate Middleton and Prince William got all glammed up for a state banquet at Buckingham Palace on Tuesday. Kate channeled Cinderella in a stunning Alexander McQueen gown complete with the Lover's Knot tiara, while William suited up in a black tail tux. The royals were joined by British Prime Minister Theresa May, as well as King Willem-Alexander of the Netherlands and Queen Maxima.

During the reception, Williem-Alexander gushed about Queen Elizabeth II in his speech, calling her the "most fearless Bond girl," referring to her 2012 London Olympics opener. "The world looks to you as a trusted beacon in the midst of upheaval," he said. "Your ability to keep in touch with the times is striking. You even have an adventurous streak, as you showed six years ago at the opening of the Olympic Games. In front of millions of viewers you played the role of the most fearless Bond girl ever — with great panache!"

Just last week, William hosted a reception for the winners of BBC's Teen Awards at Kensington Palace, where he adorably revealed that Prince George love to dance, just like Princess Diana did. "George is doing dancing as well, he loves it," William said in a Twitter video posted by Kensington Palace. "My mother always used to dance, she loved dancing. And if it's something you love, you do what you love. Don't let anyone else tell you otherwise. Keep at it." See photos from William and Kate's glamorous night ahead.

Related:
See Meghan and Kate's Royal Tours of Australia and New Zealand, Side by Side
Previous Next Start Slideshow
The RoyalsKate MiddletonPrince WilliamThe British Royals