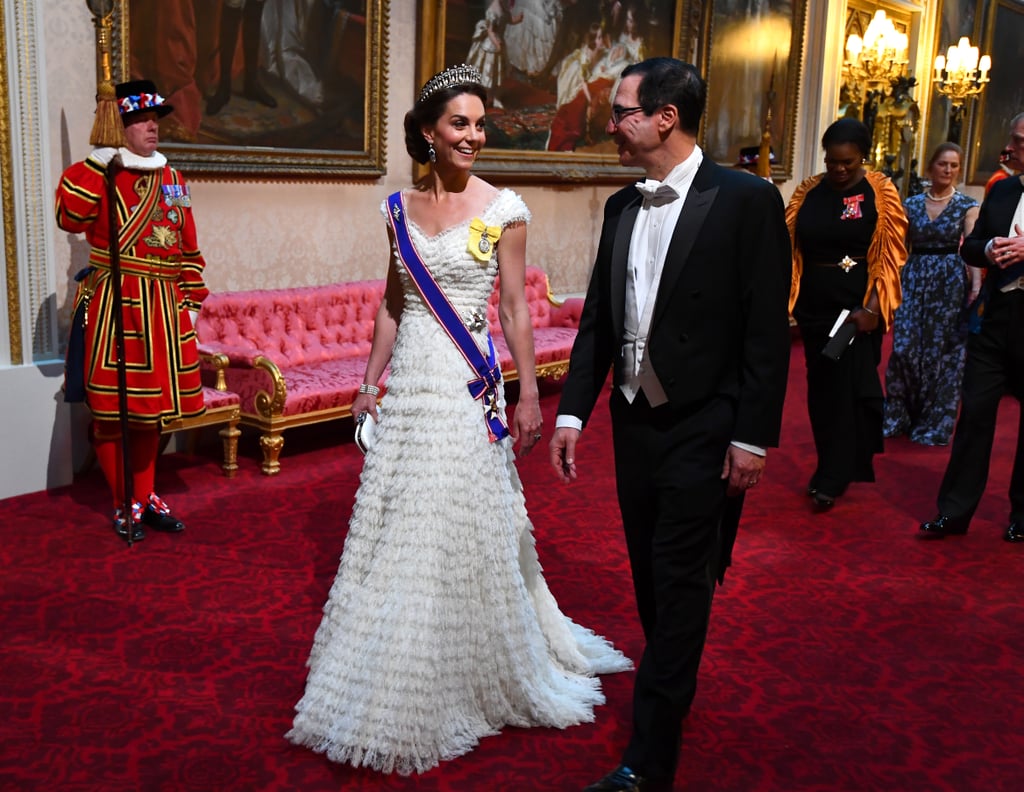 Kate Middleton was an absolute vision in white when she stepped out for the State Banquet with Prince William at Buckingham Palace on Monday. The Duchess of Cambridge stunned in an Alexander McQueen gown and the Lover's Knot tiara, while William looked debonair in a black tux. The black-tie affair was hosted by Queen Elizabeth II in honor of US President Donald Trump's UK visit, and also brought out Prince Charles, Camilla, Duchess of Cornwall, US Secretary of the Treasury Steven Mnuchin, Prime Minister Theresa May, and Donald's family, including his wife Melania, daughters Ivanka and Tiffany, and sons Donald Jr. and Eric.

During the event, the queen delivered a speech, highlighting the importance of the UK's relationship with the US. "Tonight we celebrate an alliance that has helped to ensure the safety and prosperity of both our peoples for decades, and which I believe will endure for many years to come," Elizabeth said. She then raised a toast to "the continued friendship between our two nations, and to the health, prosperity and happiness of the people of the United States."

Neither Prince Harry nor Meghan Markle were present at the banquet, as they recently welcomed their son Archie and the Duchess of Sussex is currently on maternity leave. However, Harry did have a meeting with the Trump family earlier in the day. See more of William and Kate's glamorous night out ahead!

Related:
28 Times Will and Kate Showed PDA — and Why They Don't Do It That Often
Previous Next Start Slideshow
Donald TrumpThe RoyalsKate MiddletonPrince WilliamQueen Elizabeth IIThe British Royals