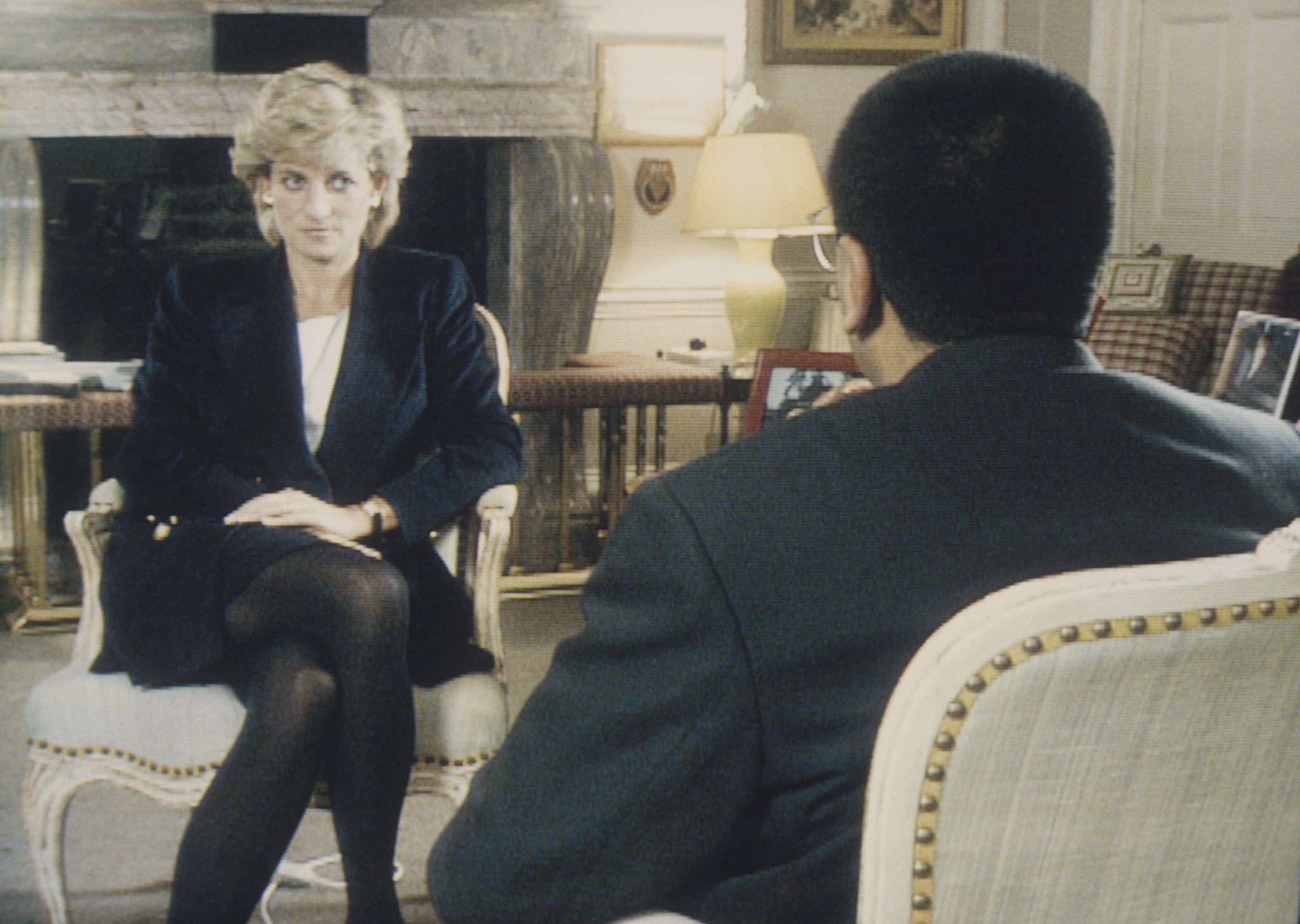 Princess Diana tragically died in a car accident in Paris in August 1997, but her life has continued to captivate the public over 20 years later. While Diana was known for her charity work and genuine closeness to the public over the years, it was her relationship with Prince Charles and the royal family in general that really got people talking. Diana and Charles got engaged in 1981 after only going on 12 dates, tied the knot five months later, welcomed sons William and Harry, and ultimately divorced in 1996.

Diana and Charles's romance seemed doomed from the start (there were doubts before the wedding, multiple affairs, embarrassing leaked audio conversations, and tell-all books), and Diana wasn't afraid to fight back against the image the royal family tried to paint for her. In an incredibly bold and brave move, Diana sat down for a revealing interview with BBC's Martin Bashir in 1995, before she and Prince Charles decided to divorce. In addition to revealing her struggles with bulimia and self-harm, she also fought back against members of the royal family who wanted her to disappear after their split. The interview will be featured in Netflix's Diana: The Interview That Shook the World, which will be available on the streamer on April 11. See her biggest revelations from the interview below.

1. Prince Charles Was Upset by Diana Getting All of the Media Attention

Diana told Martin that at the beginning of her marriage to Charles, she was very happy. "I desperately wanted it to work," she said. "I desperately loved my husband. And I thought that we were a very good team." She admitted that things started to go south, however, when the media began to pay more attention to her than her husband, something she said "can make a man, a proud man like my husband, get upset."

2. Prince Charles Then Actively Tried to Bring Media Attention Back to Him

Diana said that Prince Charles quickly decided they should do separate engagements since whenever they were out together the attention was always on her. She told Martin that she didn't want to do this because she liked having the company while engaging with the public but that she ultimately didn't have a choice. "I don't think I was allowed to have any," she said of what Charles thought of her opinions. "I think I've always been the 18-year-old girl he got engaged to."

3. She Didn't Get Family Support While Suffering From Postpartum Depression

Diana said that while she was struggling after William was born in 1982, the royal family simply turned the other way. "I felt like I was the first person ever in the royal family to openly cry and nobody knew what to do," she said. "If you haven't seen it before, how do you support it?" She also said that her depression gave everyone a "wonderful new label" to pin on her — "Diana is unstable, Diana is mentally unbalanced" — something she said stuck within her marriage.

4. She Tried to Hurt Herself

During her depression, Diana admitted that she self-harmed by "hurting her arms and legs," saying she couldn't cope with the pressures around her and was crying out for help. She also revealed her struggle with bulimia, saying the number of times she would throw up in a day depended on the pressures she was feeling. "It was a symptom of what was going on in my marriage," she said.

5. She Received Backlash For Confronting Her Husband About His Affair

Prince Charles struck up an affair with his ex-girlfriend, Camilla Parker Bowles, in 1986 during his marriage to Diana. Diana revealed that she quickly found out about her husband's wandering eye because "a woman's instinct is a very good one." She said the sadness she felt as a result of the affair made her dive further into bulimia, and when she tried to talk about it, friends on her husband's side said she was "unstable" and "needed to be placed in some sort of home to get better." She also confirmed that Camilla did play a major role in the breakdown of her marriage to Charles, saying, "There were three of us in this marriage, so it was a bit crowded."

6. She Was Honest With Prince William About Charles's Affair

Diana told her oldest son about his dad's affair with Camilla, but she made sure to put it to him in a way he could understand. "I told William, 'If you find someone you love in life, you must hang onto it and look after it. And if you are lucky enough to find someone who loves you, then you must protect it.'"

7. She Approved of Andrew Morton's Book About Her

In 1992, Diana's friend Andrew Morton wrote an intimate book about her public and private life titled Diana: Her True Story. While most public figures would be against someone writing a book about their lives, Diana told Martin that not only did she approve, but she also allowed her friends to speak to Andrew for the book. "I was fed up with being seen as someone who is a basket case because I am a very strong person," she said.

8. She Made Sure Harry and William Were Protected From Their Separation Announcement

A week before Diana and Charles decided to announce their separation to the public, she went to visit William and Harry at school to sit them down and tell them in person. Once the official announcement was then made, the two boys were shielded from all the media while tucked away at school.

9. Things Changed Quickly After They Split

Immediately after the separation, Diana revealed that "people's agendas changed overnight," saying, "I was now the separated wife of the prince of Wales. I was a problem; I was a liability. And [it became] 'How are we going to deal with her?'" These concerns resulted in her visits abroad being blocked, as well as "things that had come naturally" to her, like personal letters, suddenly getting lost.

10. She Believed the Royal Family Purposely Tried to Destroy Her Reputation

After a phone call with her close friend James Gilbey was leaked to the public in 1992, in which he referred to her as "Squidgy," Diana said she felt betrayed. While she said she didn't know how it was leaked, she thought it was done on purpose to "hurt me in a serious manner." She also said it was the first time she felt what it was like to be "outside the net and not in the family." "It was to make the public change their attitude towards me," she continued. "If we were going to divorce, it was so Charles would hold more cards than I would. It was very much a poker game."

11. She Refused to Be Bullied

Diana said that despite the "campaign" that was launched by her husband's family to make her look bad, she made sure to stand her ground. "She won't go quietly, that's the problem," she said of herself. "I'll fight till the end." She also took control of the situation when she announced her decision to take some time away from her public appearances in 1993, something she said the royal family didn't see coming. "I'm a great believer that you should always confuse the enemy," she continued. "They were undermining me out of fear, because this is a strong woman doing her bit, and where is she getting her strength from to continue?"

12. She Was Heartbroken Over James Hewitt's Book About Her

Diana admitted that she was devastated after James Hewitt, someone she admitted to having an affair with, was a major source in a tell-all book about her, most of which she insisted was untrue. The first thing she did after it was published was talk to William and Harry. Diana revealed that William then presented her with a box of chocolates and said, "Mummy, I think you've been hurt. These are to make you smile again."

13. She Shot Down Rumors That She Wanted to Destroy the British Monarchy

Because of Diana's seemingly rebellious nature during the breakdown of her marriage to Prince Charles, Martin brought up rumors of Diana wanting to destroy the British monarchy out of spite, something she said was ridiculous. "Why would I want to destroy something that is my children's future?" she said in response. "I will fight for my children on any level in order for them to be happy and have peace of mind and carry out their duties."

14. She Called Out the Monarchy For Being Distant From the Public

When asked if she thinks there are things the monarchy could change in order to improve, Diana said, "I understand that change is frightening for people, especially if there's nothing to go to, it's best to stay where you are. I do think that there are a few things that could change that could alleviate this doubt in the relationship between the monarch and the public. I think they can walk hand in hand, as opposed to being so distant. I would like a monarchy that has more contact with its people." To combat this with William and Harry, she would often take them around people who were homeless and suffering from AIDS in order for them to connect to people on a deeper level.

15. She Still Insisted That She Didn't Want a Divorce

Since the interview was conducted while Diana and Charles were still married (Queen Elizabeth II ordered their divorce after it aired), Diana was asked about where she hoped the future of their relationship would go. "I don't want a divorce," she said. "But, obviously, we need clarity on a situation that has been of enormous discussion over the last three years. I await my husband's decision of which way we are all going to go."

16. She Never Saw Herself Becoming Queen

"I'd like to be a queen of people's hearts, but I don't see myself being queen of this country," she said. "I don't think many people would want me to be queen, and when I say many people, I mean the establishment that I'm married into. They've decided that I'm a nonstarter, because I do things different, because I don't go by a rule book, because I lead from the heart and not the head. And albeit that's gotten me into trouble in my work, but someone's gotta go out there and love people." She continued that she had no support from the royal family because "they see me as a threat of some kind, and I'm here to do good." After Martin then asked her why they saw her as a threat, she responded that the monarch's questions were probably, "Why is she strong? Where does she get it from? Where is she taking it? Where is she going to use it? Why do the public still support her?"