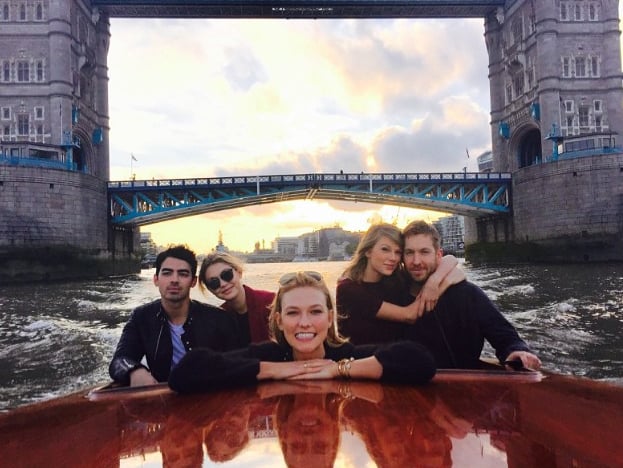 Taylor Swift and Joe Jonas's 2008 breakup is water under the bridge. Early Monday, Taylor took to Instagram with a picture of her and boyfriend Calvin Harris's beautiful boat ride with rumored couple Joe and Gigi Hadid and buddy Karlie Kloss. As Gigi leans in Joe's direction, Taylor wraps her arms around Calvin. Meanwhile, Karlie is front and center as the group takes in London vibes. "Little known fact: Karlie is secretly an unofficial historian/London tour guide. Kind of," Taylor joked in her caption.

The picture marks the latest viral moment of Taylor and Gigi's time abroad together. Two days before, the stars put on an unforgettable show with Kendall Jenner at Taylor's 1989 concert in London. Gigi has become a mainstay in Taylor's inner circle this past year; she even turned to the singer in the wake of her breakup with Cody Simpson in May. It's become increasingly clear that Gigi has moved on from the relationship. She and Joe were spotted getting cute in NYC in early June, and they later popped up at Taylor's star-studded brunch in LA.

Jennifer Lopez
Jennifer Lopez Is on Her Way to Perform at the Inauguration, and Her Outfit Game Is Already 100
by Nikita Charuza 15 hours ago