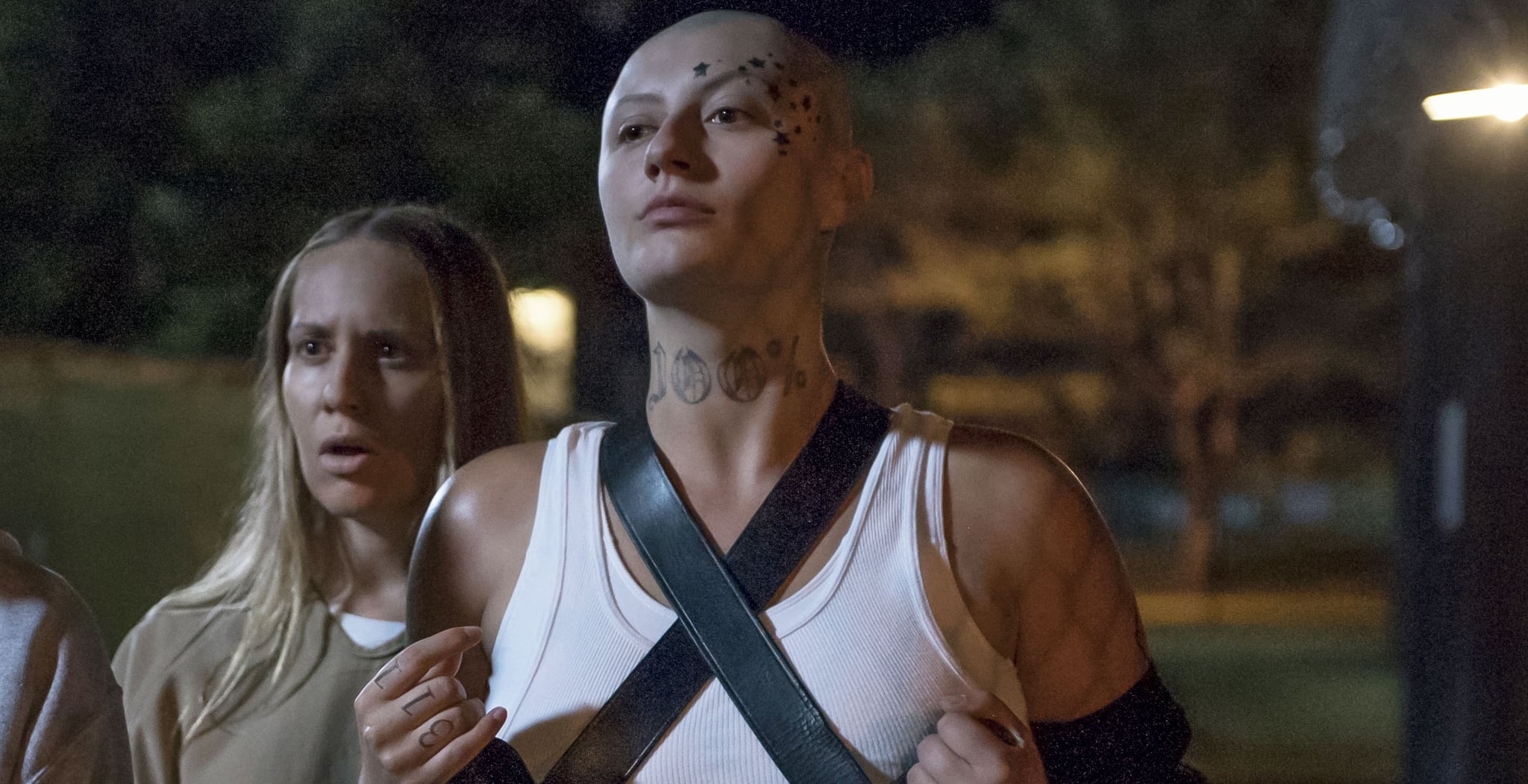 By now, most Orange Is the New Black fans know just how different the cast looks outside of their Litchfield jumpsuits, but few of the makeunders are as jaw-dropping as the one Francesca Curran agreed to while playing "Skinhead" Helen. With her shaved head and striking face and neck tattoos, Helen has always been one of the most recognizable characters on the show, despite not being one of the leads. In the show's fifth season, however, the actress gets way more screentime than she has in past seasons, so it made us wonder: what does she look like outside of her OITNB costume?

Luckily Francesca's Instagram account is a veritable treasure trove of shocking before-and-after shots chronicling her transformation into the white supremacist character. Although she fully committed and shaved off all of her hair, she's not afraid to rock some pretty glam wigs during her downtime from filming.

While speaking with Business Insider, Francesca revealed that despite her character's intimidating look, she's actually "girly" at heart. "In real life, I'm so feminine. I'm so girly. I love my makeup, I love my jewelry and all that," she said. "So to really be stripped of all that . . . The first time I was like, okay, wow. I found myself in the mirror and was like, this is a striking . . . what a difference."

That's not to say she isn't tough, though. During a recent chat with POPSUGAR, she told us that she was thrilled to be doing her own stunts this season. "We did combat training, and it was just the craziest experience because we have this amazing guy, Greg, and we have a whole team of guys that come in and show us how to do these crazy flips and wall kicks and some of the stuff we do, we'll get professional stunt people in," she explained. "But the fun part for me this season was while some of the other girls were having stunt people do it, they, for some reason, had a crazy sense of faith in me. And they were like, 'Hey, do you think you can handle this?' And being the crazy person that I am, I was like, 'Absolutely.'"

At least she didn't have to worry about her hair getting snagged on anything during training, right? Francesca has also shared a few peeks at what her normal, natural hair looks like when the show goes on hiatus and she has the chance to grow some of it back.

Her transformation even gives America's Next Top Model a run for its money (and that's a show that once attempted a "beard weave," so that's really saying something).

HBO
The Succession Season 3 Cast Is Stacked! See Who's Joining and Who's Returning
by Monica Sisavat 11 hours ago

Netflix
Fun Fact: Selena Quintanilla's Iconic "Dreaming of You" Was Originally Written For Someone Else
by Monica Sisavat 14 hours ago

Netflix
The Sons of Sam: 4 Pieces of Evidence That Suggest David Berkowitz Didn't Act Alone
by Stacey Nguyen 14 hours ago

Kendall Jenner
Kendall Jenner's Hibiscus-Print Bikini Is Still in Stock, but Don't Quote Us on That Later
by Sarah Wasilak 19 hours ago