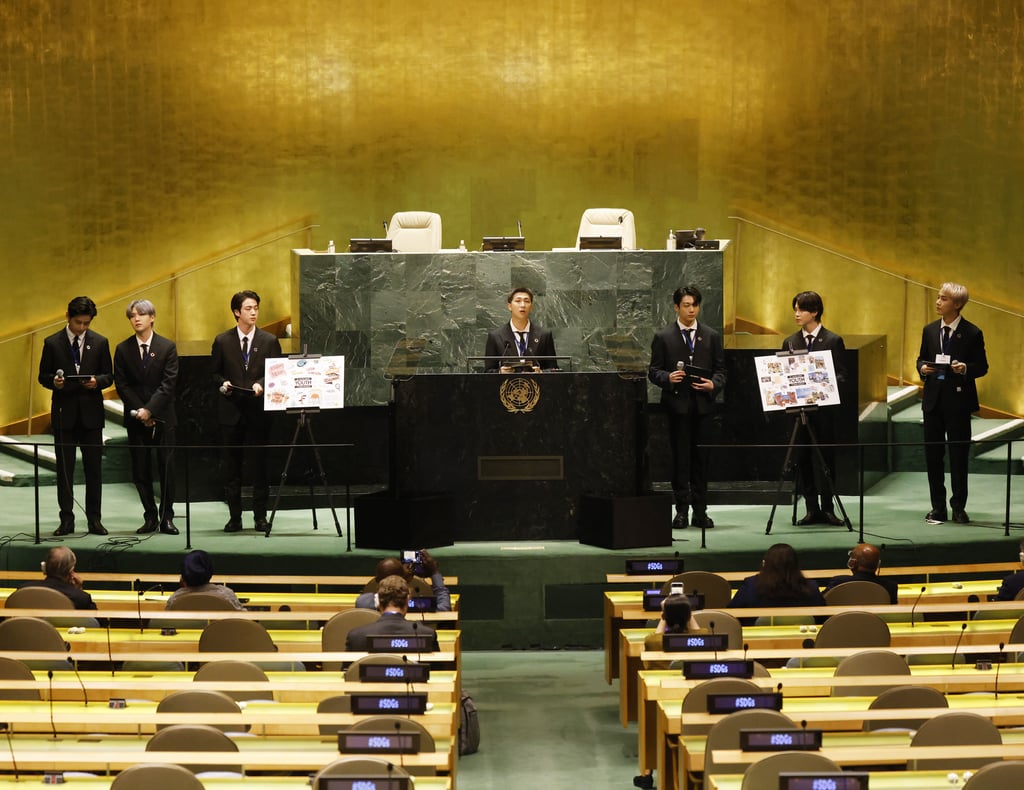 It's been (another) big month for BTS. Shortly after picking up some wins at the MTV Video Music Awards, the group appeared at the 76th session of the United Nations General Assembly in New York City on Sept. 20 as special envoys for South Korea. Jin, Jimin, J-Hope, Jungkook, RM, Suga, and V joined President Moon Jae-in in delivering remarks about the ongoing coronavirus pandemic, climate change, and how young people today are grappling with both.

"A more appropriate name would be the 'welcome generation.'"

Whereas many young people today are being commonly referred to as "COVID's lost generation," BTS urged the world to reframe that thinking. "I think it's a stretch to say they're lost just because the path they tread can't be seen by grown-up eyes," RM said. Jin added, "A more appropriate name would be the 'welcome generation,' because instead of fearing change, this generation says, 'Welcome,' and keeps forging ahead."

This wasn't the group's first visit to the esteemed global gathering: BTS met with the General Assembly in 2018 to help launch the Generation Unlimited initiative. This year, BTS also performed their new single "Permission to Dance" in a video filmed at the UN headquarters. See highlights from their visit ahead.

Related:
It's Time For the Music Industry to Recognize Just How Influential K-Pop Is
Previous Next Start Slideshow
Celebrity NewsMusicWorld NewsK-PopBTS

Celebrity News
Lauren London Honors Nipsey Hussle at Walk of Fame Ceremony: He "Was Destined For Greatness"
by Njera Perkins 9 hours ago