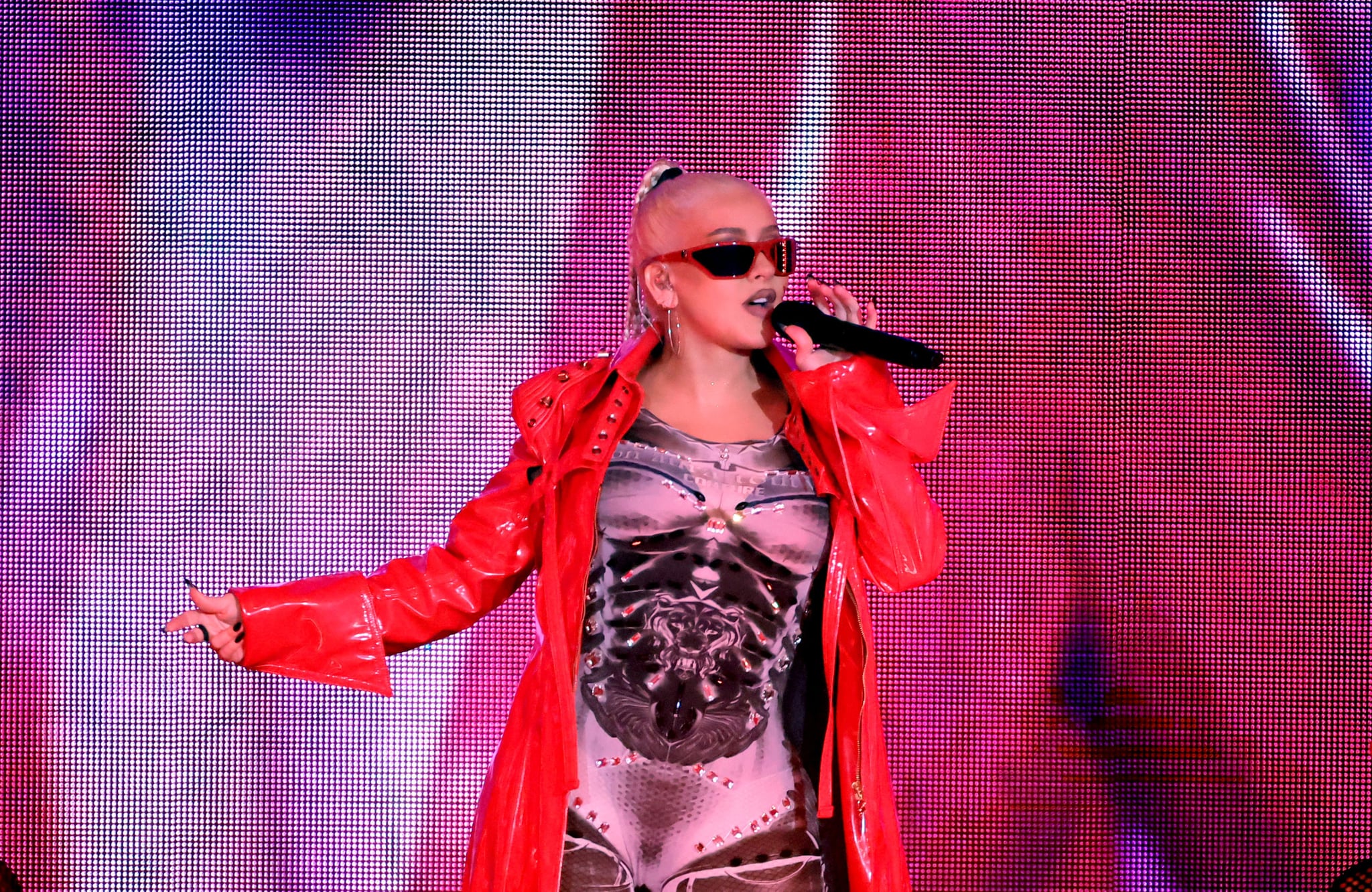 For over 20 years, pop music icon Christina Aguilera has been singing her way to the top of the charts. She recently received seven nominations for the 2022 Latin Grammys, including album of the year for "Aguilera." Her second Spanish-language album celebrates Aguilera's Latina heritage. She's of Ecuadorian descent, but the award-winning singer — in both English and Spanish — is still criticized for not being "Latina enough."

In 1999, Aguilera released her self-titled debut album, "Christina Aguilera," which was pure pop with songs that still hold up more than two decades later. The singles "Genie in a Bottle," "Come On Over Baby (All I Want Is You)," "What a Girl Wants," and "I Turn to You" all made the charts, got steady airplay on the radio, and even had music videos in heavy rotation on MTV. At this point, Aguilera was poised for success.

While promoting the album "Christina Aguilera," the music artist appeared on "The Rosie O'Donnell Show." During her interview, O'Donnell awkwardly states that Aguilera doesn't look Latina at all, but the pop star enthusiastically exclaims that she is. She shares that her father is from Ecuador and that she's proud of being Latina. However, because Aguilera is racially white with blond hair and blue eyes but ethnically Latina, people tend to dismiss that part of her heritage. Fitting a preconceived notion of the "Latina aesthetic" is an even bigger issue for Latinxs with darker skin, particularly for Afro-Latinxs in Hollywood and beyond. We know that in the real world, Latinxs vary racially and come in all skin tones, shapes, hair textures, and features. But at the time, Hollywood was still quite behind when it came to understanding and respecting the diversity that exists within Latinx communities.

However, because Aguilera is racially white with blond hair and blue eyes but ethnically Latina, people tend to dismiss that part of her heritage.

Aguilera shared that she was asked to change her last name to something more palatable and possibly easier to pronounce, but she refused because she was and still remains proud of her heritage. In 2000, she released her sophomore album, "Mi Reflejo," also her first Spanish-language album. The tracks included five Spanish-language versions of songs from her debut album and new songs. There were three singles: "Ven Conmigo (Solamente Tú)," the Spanish version of "Come On Over Baby (All I Want Is You)," "Pero Me Acuerdo de Ti," and "Falsas Esperanzas." These tracks propelled the album and helped to make "Mi Reflejo" one of the bestselling Latin pop albums of the year, becoming certified 6× Platinum by the Recording Industry Association of America (RIAA). In 2001, Aguilera won her first Latin Grammy Award for Best Female Pop Vocal Album for "Mi Reflejo."

Despite performing songs in Spanish, people remained critical of the singer and constantly questioned her Latinidad. Some viewed her earlier days of singing in Spanish as a faze or a marketing ploy. This skepticism is not entirely unwarranted. During the late '90s, there was a lot of buzz surrounding the "Latin Explosion," where primarily Spanish-language singers, many already very well known outside of the US, started singing Latin-style pop music in English to "cross over" to the US market and expand their audience.

It's important to note that this "Latino Boom" also happened to coincide with the growing Latino population in the U.S. By 2005, there were 41.9 million Latinxs in the US, which represented the largest minority group in the nation. The increase in the US Latinx population was a hot topic, and there were conversations about the power of Latinxs in the US, specifically the buying power of Latinx communities. Brands took notice, and so did music executives. During this period, there was a rise of Latinx artists ruling the charts and breaking all sorts of records. So, was this excellent marketing or great pop music? Maybe it was a bit of both. Some stars were able to "level up" in the US market and others did not have as much success.

Fast-forward, Aguilera has kept very busy since the beginning of her stardom. She started a family, made eight more albums, collaborated with other artists, and worked on film and TV projects. When it comes to her music, she has continued to express pride in her roots. In 2002, in her second English-language album, "Stripped," she included Spanish-language songs: "Primer Amor Interlude" and "Dame Lo Que Yo Te Doy." On her "Bionic" album, released in 2010, she included the bilingual song "Desnudate."

As we know, Aguilera can belt out a song in Spanish just as easily as she does in English. However, when it comes to speaking, she is not a fluent Spanish speaker. Recently, she was honored for her philanthropic and humanitarian work with the Spirit of Hope Award at the 2022 Billboard Latin Music Awards. She gave her acceptance speech in English, which was translated into Spanish, and as a result, received some negative feedback on social media.

Language is a hot-button issue for many Latinxs and is often a point of contention.

Language is a hot-button issue for many Latinxs and is often a point of contention. In the US, about 40 million people speak Spanish at home, making it the nation's second-most spoken language. However, as we move through immigrant generations, the number of Spanish language speakers among US Latinxs declines. Whether you speak Spanish or not and how well you speak Spanish lends itself to critique and contributes to the idea of whether or not you are "Latino/a/x enough."

Now, her ninth album, which is also her second Spanish-language album "Aguilera," is being recognized for a wider breadth of Latin music than her first album. You can hear the influence of multiple genres, including Ecuadorian pasillo, ranchera, cumbia, reggaeton, and more. She has received a total of seven Latin Grammy Award nominations, making her the second most nominated artist, only second to Bad Bunny with 10 nominations. Aguilera's nominations include album of the year and best traditional pop vocal album. There are a few standout songs on the album that are being recognized. Up for record of the year and best urban fusion/performance, "Pa Mis Muchachas" with Becky G, Nicki Nicole, and Nathy Peluso, is a guaracha song that focuses on women's strength passed down through generations. Nominated for the best regional song, "Cuando Me Dé La Gana" is a powerful ranchera duet with Aguilera and Christian Nodal about the ending of a relationship. Aguilera has once again proven herself to be a force in Latin music with this album.

It's been well-established that Aguilera is a Latina who is expressive of her cultural pride. Latinxs are not a monolith and are as diverse as can be. That's what makes the culture so rich. There is no one way to be Latinx and no such thing as being "Latino/a/x enough." Aguilera shares her cultural pride through her music and has done so consistently for her decade-spanning career. She has claimed it all along; you just may not have been paying attention.

Adele
Adele Reminds a Fan That Filters Aren't Reality: "We Don't Look Like That, Darling"
by Chandler Plante 2 days ago