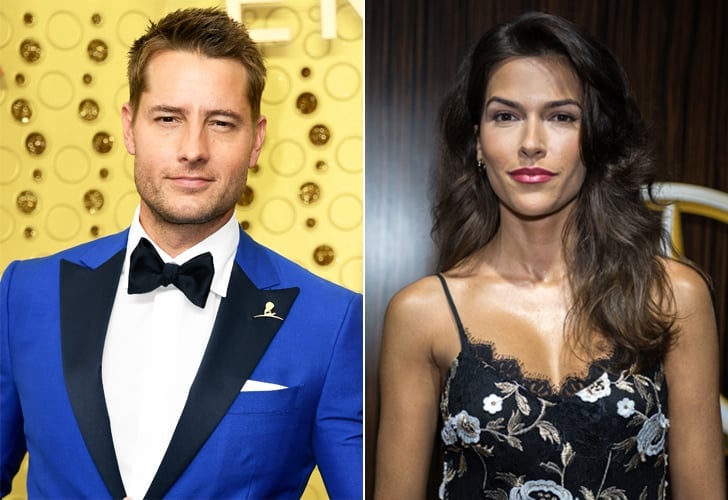 Justin Hartley and Chrishell Stause's divorce is playing out in season three of Netflix's Selling Sunset, but the 43-year-old actor seems totally unbothered by it. On Sunday, the This Is Us star posted a photo of himself swimming with his dog Paisley on his Instagram Stories. "Paisley like Sunday mornin,'" he captioned it, referencing Lionel Richie's hit "Easy." His girlfriend, Sofia Pernas, shared a snap of Justin with two drinks in Guinness glasses with a similar message, writing, "Easy like Sunday mornin.'"

Rumors of a romance between Justin and Sofia first began swirling when they were photographed kissing outside of a medical building in LA in May, six months after Justin filed for divorce from Chrishell. Though Justin and Chrishell split in November 2019, their breakup has taken center stage on Selling Sunset. In the latest season, which premiered on Aug. 7, we found out that Justin informed Chrishell about his divorce filing through text, however, the reason why is still unclear.

Justin and Sofia have yet to publicly confirm their relationship, but perhaps this was their subtle way of doing so? See the photos ahead.

Related:
Everything You May Have Forgotten About Chrishell Stause and Justin Hartley's Relationship
Previous Next Start Slideshow
Celebrity InstagramsJustin HartleyCelebrity CouplesSofia Pernas

Celebrity Instagrams
Adam DeVine Is Not Adam Levine, So Please Leave Him Out of This
by Chandler Plante 8 hours ago