Liam Payne has been spilling a bit of tea about One Direction while promoting his new album, LP 1, and on Thursday's episode of Watch What Happens Live with Andy Cohen, he shared another tidbit about his days with the band. During a game of "Never Have I Ever," Liam admitted that he's not super proud of every music video the quintet put out and revealed which one is his least favorite. "I looked a little funky," he said, sharing which 1D clip he isn't a fan of.

Liam also spoke about his former bandmates and responded to Harry Styles poking fun at Zayn Malik during his Nov. 16 appearance on Saturday Night Live. "I think it's just a funny joke at the end of the day," Liam said. He went on to talk more about Zayn's departure and how each member dealt with it.

Find out which One Direction video Liam dislikes the most in the clip above, then watch him talk more about Harry's playful dig at the Zayn in the clip ahead! 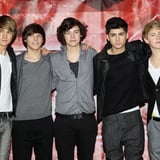