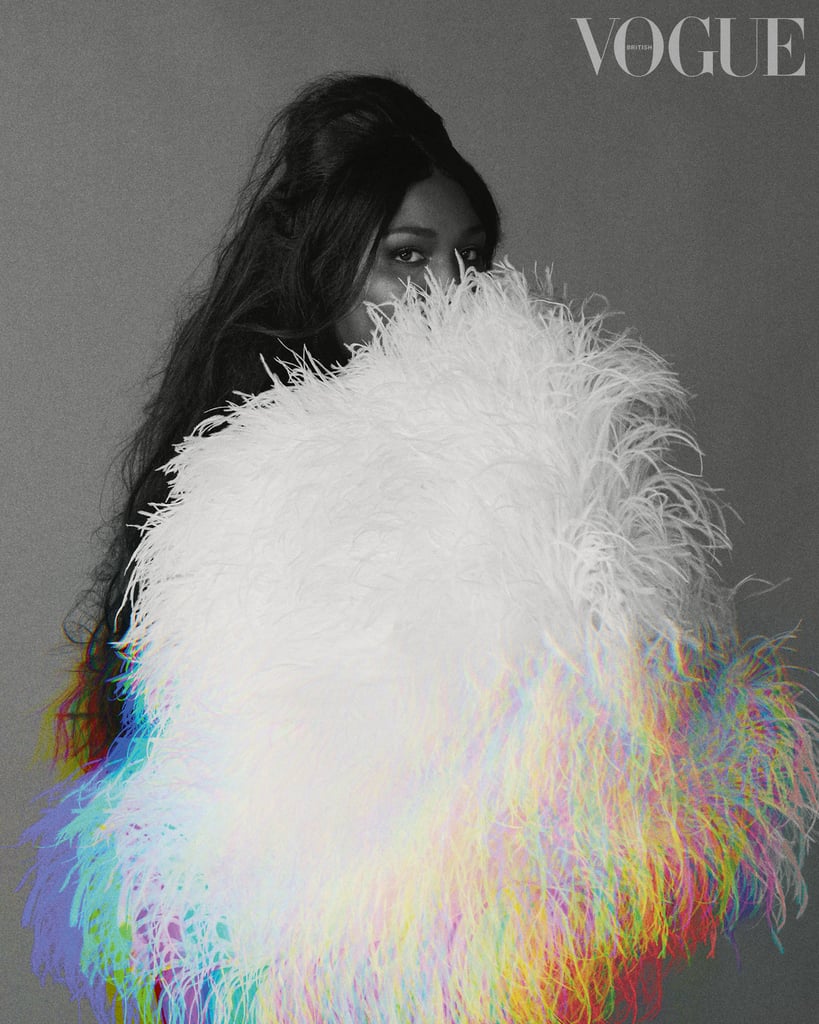 Lizzo is on top of the world right now. Between the success of her third studio album, Cuz I Love You, and "Truth Hurts" hitting No. 1 on Billboard's Hot 100 chart, the 31-year-old singer has solidified herself as a force in the music industry and a queen of self-love. However, things weren't always that way for the star. In the December issue of British Vogue, she reflected on her career journey and spoke candidly about her dealings with anxiety.

"I became a good singer touring as a rapper," Lizzo explained. "All of the things that I would rap would turn into melodies and they would get real soulful and real punchy. It was not a secret ace card in the pack, it was a tool that I was finely tuning and shaping."

Even though Lizzo worked hard to improve her singing, the lack of body representation in the media caused her to second guess herself at times. "I would watch things on television and I would look at magazines and I would not see myself," she recalled. "When you don't see yourself, you start to think something's wrong with you. Then you want to look like those things and when you realize it's a physical impossibility, you start to think, 'What the f*ck is wrong with me?' I think that took a greater toll on me, psychologically, growing up than what anyone could have said to me."

"My journey is all about self-care and finding that love for yourself and nurturing yourself."

Now, Lizzo uses that anxiety to push herself instead. "When I get really, really anxious before a show, I just go harder and harder and harder when I'm performing and I just go crazy," she said. "I don't know why, but my anxiety sometimes fuels who I am as a performer and who I am as an artist — and I know that is not the case for everyone. I don't know if my body just, like, out of a desperate need to find a place for my anxiety or find a use for it, takes it and puts it there. I think if I was 21 right now, I would not be able to maintain this lifestyle without having major anxiety and panic attacks. But thank God, my journey is all about self-care and finding that love for yourself and nurturing yourself. Because that's what artists need more than anything."

For Lizzo's full interview, check out the December issue of British Vogue, which hits newsstands on Nov. 8.

Related:
Yes, Lizzo Is "100% That B*tch," but What Is Her Real Name?
Previous Next Start Slideshow
LizzoCelebrity QuotesBritish VogueCelebrity Interviews

Tom Holland
Tom Holland Roasts Brother After His "Brutal" Fight Scene in Spider-Man: No Way Home Was Cut
by Naledi Ushe 1 day ago

Celebrity Instagrams
Lizzo's Latest Shout-Out to Chris Evans Has Us Asking, "Why Aren't They a Couple Already?!"
by Princess Gabbara 1 day ago

Lizzo
Are We in Wonderland? Lizzo Delivered a Floral Fantasy in This Whimsical Purple Catsuit
by Chanel Vargas 1 day ago