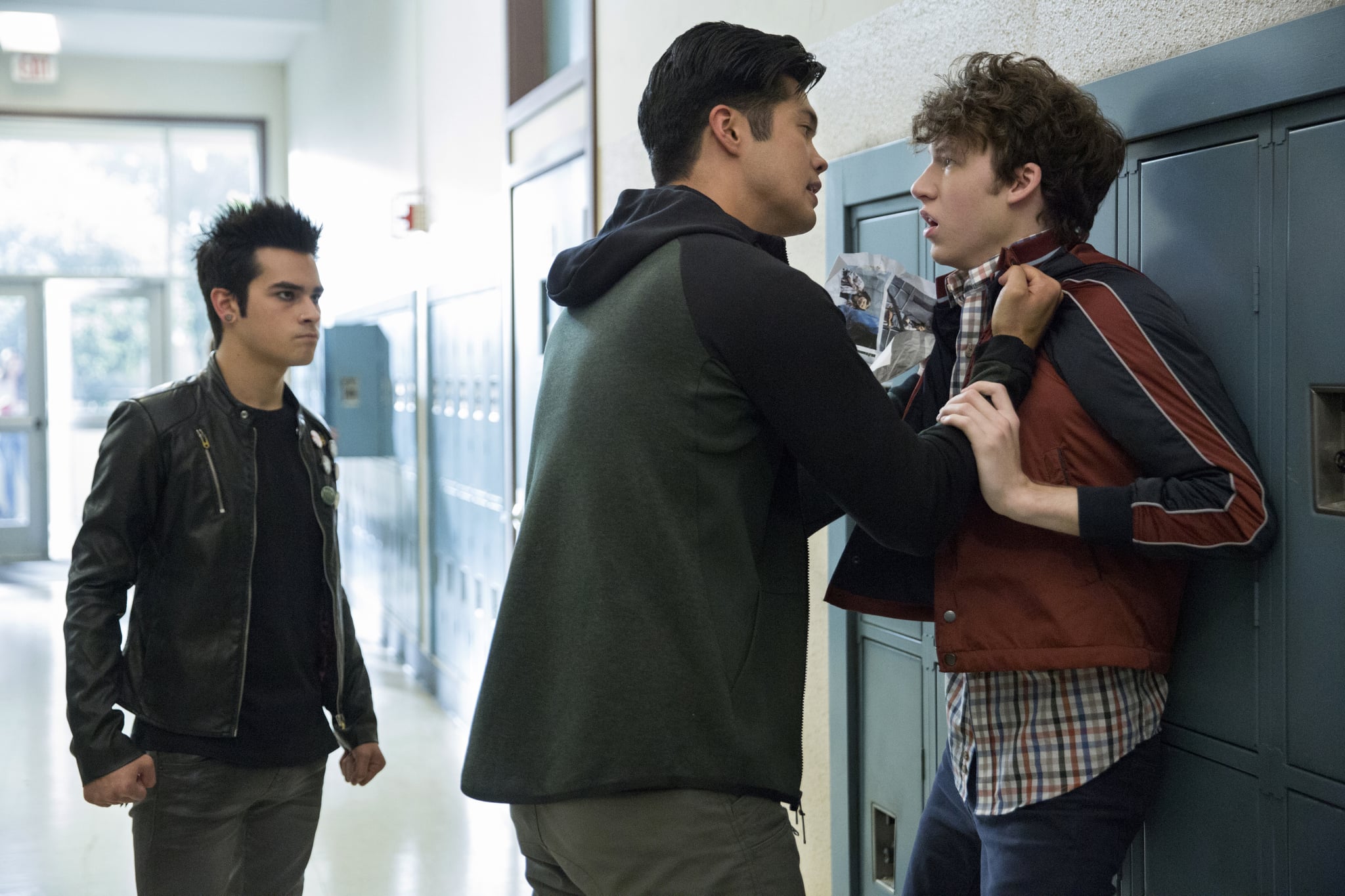 Warning: Major, major spoilers for 13 Reasons Why below.

By the time you arrive at the last episode in 13 Reasons Why's second season, you're no doubt going to be emotionally exhausted. Netflix's high school drama packs in a number of Serious Issues for its teenage characters to endure, from heroin addition and suicide to rape and mental illness. In fact, because of season one's backlash, the new season now begins with a PSA that warns the show might not be appropriate for viewers triggered by its "tough, real-world issues." But the storyline for bullied yearbook photographer Tyler Down (Devin Druid), which culminates in a tragic way in the final episode, is still causing some controversy.

In season one, Tyler is largely depicted as a creep; he's on Hannah's tapes for stalking her and taking photos from outside her bedroom window, and the rest of his classmates can't stand him snapping their photos every few seconds. By season two, Tyler has had enough. He's the first person to testify in the trial between Hannah's parents and the school district, where he gets real about the bullying at Liberty. His blunt admissions on the stand get back to the student athletes, who are by far his worst attackers, creating an even more dangerous situation for Tyler. He spends the rest of the season befriending a punk rock-loving outcast named Cyrus, but when an incident with Cyrus's sister goes wrong, the bond between them sours.

Related:
Warning: Here's When the Rape Scenes Happen in Both Seasons of 13 Reasons Why

By the end of season two, the school ships Tyler off to a wilderness camp for a month or two to get his behavior back in line after he vandalizes the baseball field, which enrages baseball player and Bryce's BFF, Monty. Tyler's first day back at school after his hiatus ends in disaster; Monty and a group of other athletes corner Tyler in a bathroom and brutally assault him. Not only do they slam his head into the sink repeatedly, but they drag him into a bathroom stall and start holding him down in the toilet water. Finally, Monty sodomizes Tyler with a broken mop.

Tyler is left traumatized mentally and physically, later realizing that he can't stop bleeding when he uses the bathroom. It spurs him into nearly shooting up Liberty High's dance before another classmate intervenes. His rape is unquestionably the season's most difficult scene to watch, and one of the darkest in 13 Reasons Why as a whole. But it's also rare; it's not often we see male victims of sexual assault in mainstream TV shows. As it turns out, that's exactly why showrunner Brian Yorkey wanted to include it.

Related:
Sound the Alarm: 13 Reasons Why Is Officially Coming Back For Season 3

In an interview with Vulture, Yorkey had this to say of the controversial scene:

"We're committed on this show to telling truthful stories about things that young people go through in as unflinching a way as we can. We fully understand that that means some of the scenes in the show will be difficult to watch. I think Netflix has helped provide viewers with lots of resources for understanding that this may not be the show for everybody, and also resources for people who do watch it and are troubled and need help.

But the fact is that, as intense as that scene is, and as strong as are or reactions to it may be, it doesn't even come close to the pain experienced by the people who actually go through these things. When we talk about something being 'disgusting' or hard to watch, often that means we are attaching shame to the experience. We would rather not be confronted with it. We would rather it stay out of our consciousness. This is why these kinds of assaults are underreported. This is why victims have a hard time seeking help. We believe that talking about it is so much better than silence."

Related:
Hannah's New Romance in 13 Reasons Why Is Sweet, But It Never Should Have Happened

Some viewers are already saying 13 Reasons Why should be canceled because of the scene, and the Parents Television Council issued an "urgent warning" to people planning on watching it. Yorkey also told Vulture that he thinks the outrage over Tyler's rape scene is because it depicts male-on-male sexual violence, instead of a woman being raped.

"The very, very intense scene of Hannah's suicide seemed to overshadow the fact that Hannah and one other girl were violently raped in season one," he told the site. "If there's a greater sense of backlash about this scene, especially it being hard to watch, 'disgusting,' or inappropriate, that goes to the point that we need to be talking about the fact that things like this happen. The fact that this would be somehow more disgusting than what happened to Hannah and Jessica, I'm shocked but not surprised."

While Tyler doesn't end up acting on his plan to commit a mass shooting, it's obvious that he still has a long, long road to recovery ahead of him. Season three is looking more likely than ever, so hopefully his story is handled with the nuance it deserves.