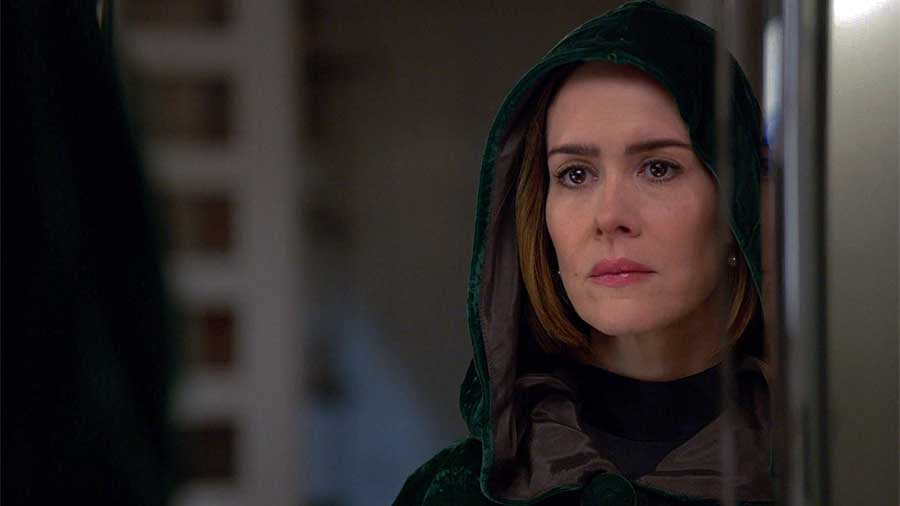 American Horror Story is not generally a show of ambiguities. There's usually one (or more!) pretty clear-cut baddie (even if it isn't revealed right away), lots of mayhem and murder, and then a few survivors left standing amid all the carnage at season's end. Cult follows much the same pattern, except the ending is a little ambiguous, leaving room for some speculation about the nature of power and leadership.

Warning: Spoilers for the final episode of AHS: Cult below.

At the end of Cult, Kai breaks out of prison and stages an attack at Ally's senatorial debate, which fails spectacularly because the only thing more dangerous than a humiliated man is a nasty woman. Ally gets the drop on Kai, even managing to flip his woman on the inside, a prison guard he seemingly recruits to his cult. It's a fairly satisfying ending, especially since Beverly is the one to put a bullet in Kai's head and end things for good.

But does she end things for good?

After Ally wins the senate seat, with an astronomical 80 percent of female voters casting their votes for her, she tucks in Oz and tells him she has to go out to a meeting after he's asleep.

"Some very special, very powerful friends are going to help bring about that world that we were talking about," says Ally, referencing how she told Oz moments ago that she hopes to make a better world for him now that she's in a position of power.

But after Ally goes to her room to get ready for her meeting, she stares at herself long and hard in the mirror, dusts on a little powder, and then puts up the hood of her green velvet cloak — the very same cloak worn by Frances Conroy's Bebe earlier in the season. And with a swish of her cloak, Ally is gone, and so endeth the season. But what does that mean?

I happen to think it means that while Ally has the best intentions — as she tells Oz, she hopes her political power will "help show [her constituents] the way . . . take them to a better place, a better world. I want that for you, Oz. A world where you can be a better man than the ones that came before you." — she has thrown herself in wholeheartedly with Bebe and a modern-day version of SCUM.

Now, Ally reassures Oz that this isn't like Kai. "Not like Kai. Never again like Kai. Women. A group of powerful, empowered women who want to change the system," she promises her son.

So perhaps that's true. This season has touched on a lot of things, but one of the main themes has been female rage and what happens when it is unleashed on the world, finally untethered by the oppression of men. As we've seen in the past few weeks since the Harvey Weinstein news broke, it's as if floodgates have been opened, with women feeling safe enough to bravely tell their stories about sexual harassment and assault. But Valerie Solanas's episode is also a cautionary tale about what happens when a cult spins out of control. Kai's story is another one, as he clearly does not end at the same place he begins. It is later revealed that Kai is actually working in concert with Bebe to rile up local women and unleash the female rage inside, but he starts buying into what he is selling about protection, interlopers, and weaklings, and suddenly he's leading his very own army of Nazis and killing his own siblings. So we've seen with our own eyes how quickly something can get out of control.

You may argue that Ally is not Kai, and that may very well be true. Maybe Ally's army of "very special, very powerful friends" is truly going to help her change the world. But can she keep that power in check and not let it corrupt her?

The ending seems just a touch too ominous to be that optimistic, though maybe I'm reading too much into it. But the way Ally stares at herself, solemnly preparing for her meeting, makes me wonder. It's almost as if she can't believe what she's about to do, at least that's my interpretation.

We may never know, which is OK. Sometimes ambiguous endings are good, letting each individual viewer or reader decide for themselves. Overall, though, I thought Cult was a pretty solid season of AHS. I haven't loved any seasons as much as I loved Murder House and Asylum, but Cult might be right up there with them.