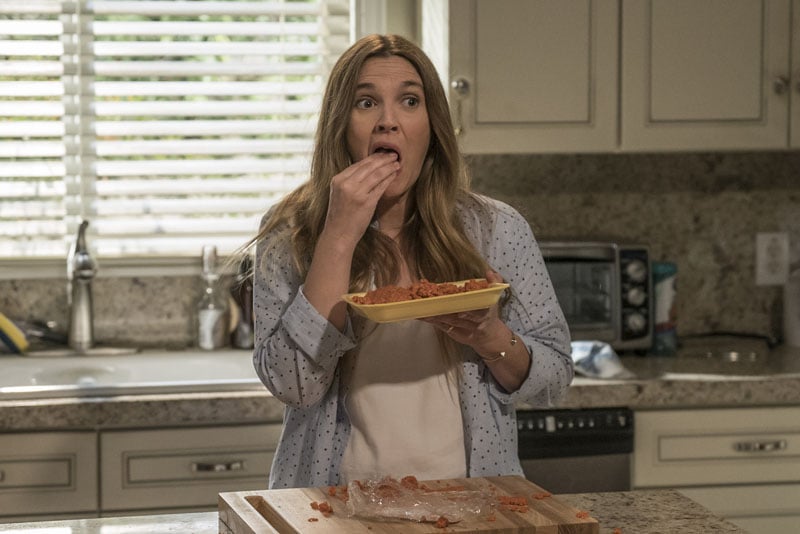 Santa Clarita Diet premiered on Netflix this weekend, and the campy comedy is not only funny (albeit a little gross), but also stars some pretty solid guest stars. The second episode of the series — titled "We Can't Kill People!" — features a cameo from Broad City actor John Gemberling, who you'll recognize as Abbi Abrams's mooch of a psuedo-roommate, Matt Bevers (technically, Bevers is the boyfriend of Abbi's real roommate, who we never see).

On Santa Clarita Diet, Gemberling plays Bunchen, the manager of a comic book store where Sheila (Drew Barrymore)'s daughter Abby (Liv Hewson) visits after ditching school with her next-door neighbor Eric (played by Skyler Gisondo). After repeatedly telling Abby and Eric that they can only read each comic for 30 seconds without buying it, Bunchen flips out and walks over to them, saying, "Thirty seconds, Abby's friend," to which Abby yells, "Abby. My name is Abby!" He then gives a nod to his Broad City costar by taking a beat before screaming, "Oh, Abby! Well that changes everything!" It's a subtlety that may only be noticed by Broad City fans, but as Abbi Abrams would say . . .

TV
On Our Radar: Look Out, World! Jerrie Johnson Is Just Getting Started
by Monica Sisavat 3 hours ago

Red Carpet
Shoniqua Shandai's Harlem NYC Premiere Look Is as Vibrant as Her Character Angie, Love to See It!
by Naledi Ushe 6 hours ago