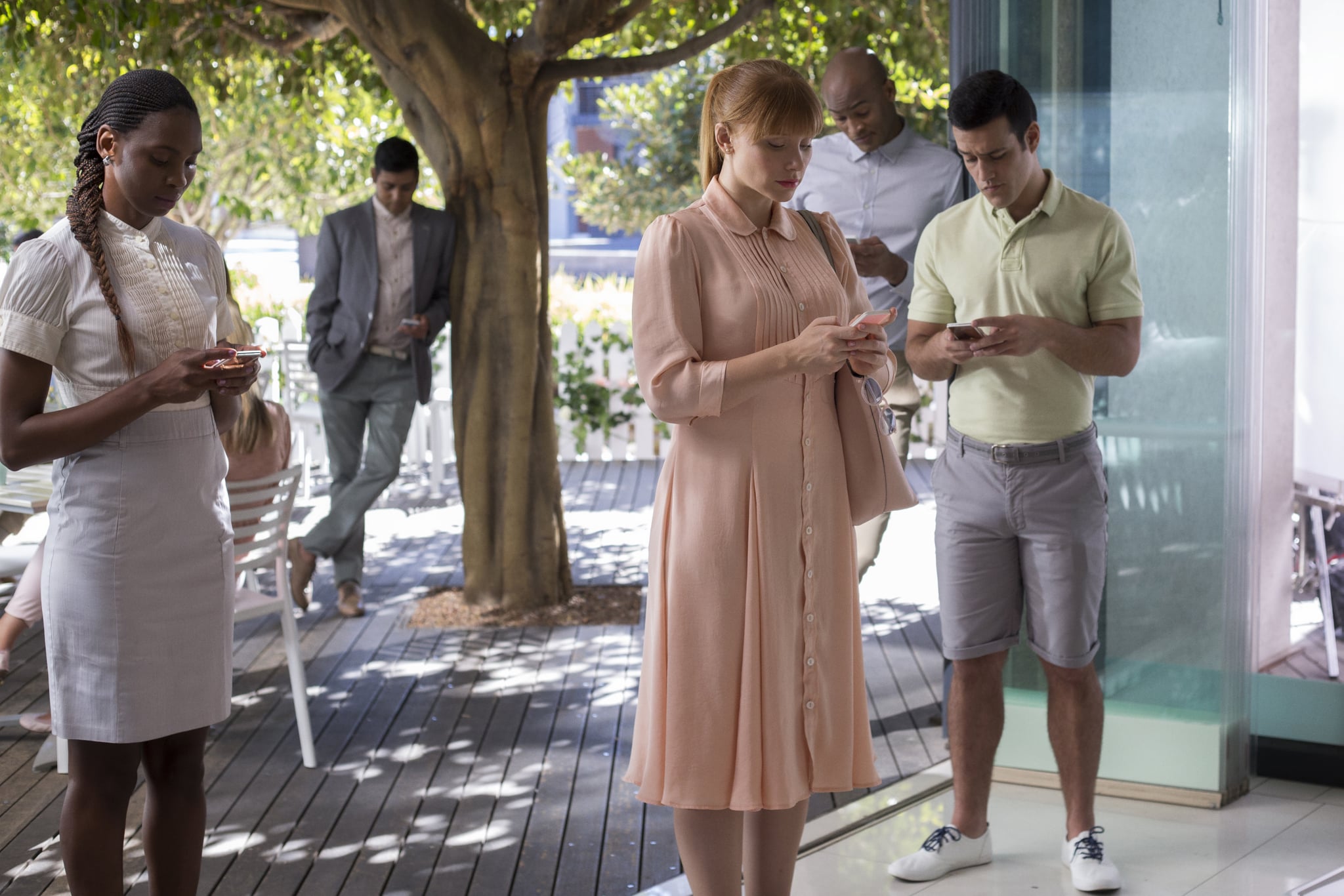 When I first sit down across from Alice Eve, I briefly find myself worried that I've stumbled into the cotton-candy-colored nightmare found in her recent episode of Black Mirror. With her white-blond hair done up in an elegant bouffant and dressed in a pastel pink dress, she looks like she's stepped straight out of season three's "Nosedive," which — like other stand-out episodes from the season — offers an interesting but disturbing look at what the future of technology might yield. Thankfully, costar Bryce Dallas Howard, who sits beside her in dark clothes and without a phone glued to her palm, could not look less like her character, Lacie Pound.

In "Nosedive," Lacie is an enthusiastic young woman living in a world where people rate each other on literally everything they do, from their choice in outfits to the way they treat cashiers (and you thought getting rated by your Uber driver was bad). As the episode progresses, she begins to crumble under the pressure of keeping up a high rating while she prepares to attend the wedding of her seemingly perfect childhood friend, Naomi (Eve), and her ensuing breakdown is enough to make you want to throw your cell off the nearest bridge. I sat down with both actresses to discuss why exactly their episode is so damn hard to watch, how their perceptions of social media have changed since filming, and why one episode of Black Mirror is never enough.

POPSUGAR: "Nosedive" isn't overtly scary in the way that some other Black Mirror episodes are, but has more of a building sense of dread. What do you think it is about that episode that really scares people?

Bryce Dallas Howard: I got a bunch of texts from friends and family when this came out, and they were saying that they had to stop the episode in the middle and take a little walk around the room and shake it off. I think that we can so easily project our own journeys onto Lacie's journey, particularly with social media. It's new for all of us, and it's terrifying for all of us, and it's taking over our lives. We don't really think about it or how to manage it.

Alice Eve: Going off of what Bryce is saying brilliantly is that in horror films, they sometimes don't show the monster because our imaginations and our own pain is so much greater. Social media is like that. I think it's so great. It doesn't have to show a monster — when you see someone leaving a mean comment, or living a so-called perfect life, you just put all of your pain into that. I think that's what happens in "Nosedive," and I think it's scary because we all do it. We do it to ourselves, we do. It's not like anyone else has to come in and kill us. We just kill ourselves.

BDH: And with this monster metaphor, if someone down-votes you, or you don't get a like, or someone says something not cool, you project onto it the person or the people who have hurt you the most in life. It's almost like that is coming from them instead, and in that story you are that person. Lacie loves Naomi the most, and needs her approval more than anyone else's. What this really is the story of is someone basically trying to get a monster to love them. It's impossible.

PS: At the end, we get to see both of your characters spiral out in different ways, finally succumbing to the pressures that have been building up for the entire episode. What was it like to film that?

AE: It was amazing! We had this amazing monologue from Bryce. All the supporting artists were acting as if it were like a play, so they'd cheer at the end of every take. They were clapping and yelling out, "Yes, one more!" It felt like we were in the theater.

BDH: We were putting on a show! What's so fun about an episode like this is that you do go to such extremes. Sometimes acting, particularly in film, can feel so contained. You need to be small and not overplay things, so it's such a relief to be able to go as far as you can go with an emotion or a feeling or a speech. It just goes so, so, so far.

PS: Speaking of extremes, Bryce, your character gets to completely let loose in the final scene when she's locked up and screaming "f*ck you" at the guy across the hall. Unlike other episodes of Black Mirror that I've seen, though, it almost feels hopeful. Was that cathartic in any way for you?

BDH: There's almost a whole journey contained in that scene, so it's meant to be very cathartic. In the beginning, she's been arrested, and she's coming to grips that she's lost everything. She no longer has her contacts in, so she can't see anyone's ratings or engage in that world. She's wearing the size-four dress that doesn't fit her. In that cell, she lets go of everything and becomes free. There's that moment where I'm looking at the dust particles that she's seeing for the first time, and she's actually inhabiting a space, being present in the moment.

AE: It's like that plastic bag moment in American Beauty.

BDH: Yeah, like how beautiful these small things that would go completely unnoticed normally, and how precious they are. When Lacie is starting to talk with the gentleman in the other cell, it's like she's freed for the first time. The more insults she throws, the closer they become. They're real with one another. That twinge of hope is hopefully because she's gone through a catharsis, she's now free, and she's standing before a man she's attracted to, and he seems to be attracted to her. It's hopefully the beginning of their lives together.

PS: Yeah, it ends in a way that you feel a sense of satisfaction and release, but you also want it to keep going.

BDH: I want a sequel! 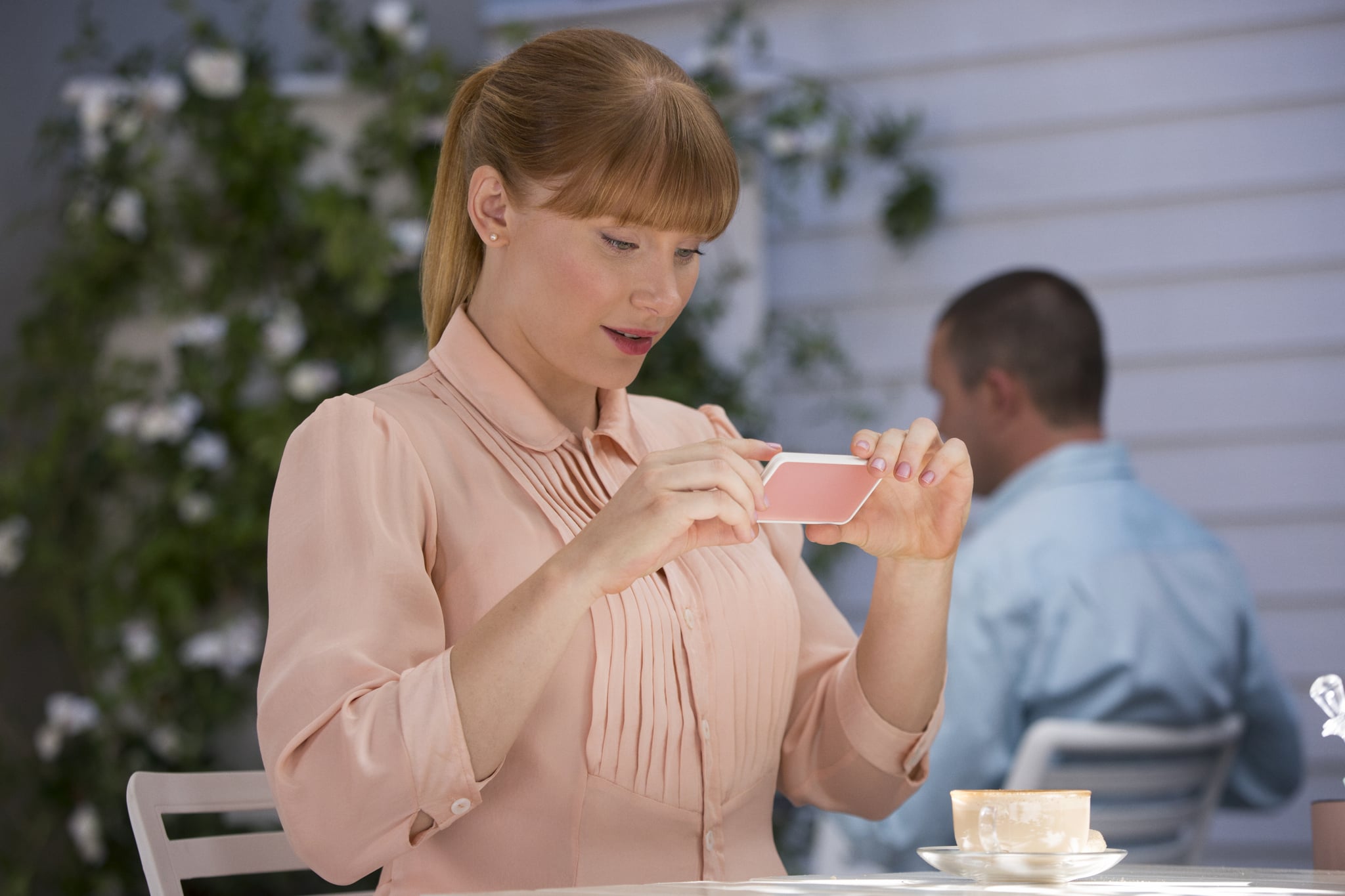 PS: After the both of you were done shooting, did your opinions on social media change in any way?

AE: Well, I feel like this is like a documentary about real life, this film, rather than some futuristic thing. We talk about it as if, like, "Oh my god, can you imagine?" But we really do have that situation already. People are going so far as to kill themselves over the things that happen online. There are real emotional responses to it. The world Joe [Wright] created is very opulent and delicious and edible, like candy floss or a cartoon world. I think to remember that social media is a cartoon world is important. Snapchat does it very well, because you have a dog on your face and you know it's a cartoon. It's knowing that what you're seeing, certainly on Instagram, is not real, not a reflection of real life, not an interaction. That's what I took away from it.

PS: Conversely, is there something about social media that you really love?

AE: Yeah, that. The cartoon world. [laughs] It's really pretty.

BDH: I'd just joined social media. I haven't even been on social media for a year. A couple weeks after joining, though, I got the treatment for this script. I have hopefully a little bit of sense of awareness with it now, but I just realized that for the longest time, I didn't know how to check other people's feeds. When I started Instagram, it was just me posting! But then at some point, like eight months ago, I realized I could see what other people were sharing. It was so exciting and so fun, but it was like I'd already gotten into the rhythm of sharing and not worrying about what it was like compared to other accounts. I think that was kind of protective, in a way.

AE: Being protective is important. My friend joined me up about three years ago, because I have a problem with telling the truth, so she sort of navigated it for me. I'd say "I want to post this," and she'd say, "OK, well I'll put this up instead." If I did it, I would be like, "Oh my god, this f*cking place sucked," because I always say the things you're not supposed to.

BDH: She always tells the truth!

AE: I do, which is not great for social media. You have to learn how to use it, because it's not actually an organic process.

BDH: Yeah, because folks would tell me to just get on and be myself.

BDH: Exactly! You can't just say, "On the toilet right now." [laughs] It's difficult because it's addictive, though. For instance, I've never had any alcohol before. And people always say stuff like "good for you," but I'm like, "No, no no." It's not hard for me, because I've never participated. What's difficult are the folks who need to kind of manage that and need to police themselves. I just don't even want to be disciplined in that way. You have to figure out your relationship with it, and it has to be a conscious thing. That's the burden of social media, because it can be so great for keeping in touch with people and sharing things about yourself, and there are a lot of hilarious, brilliant, amazing, paradigm-shifting things that happen on it. But how do you eat the chicken and spit out the bones? How do you balance it?

Netflix
Before Money Heist Returns, Here's a Recap of This Important Character's Death
by Amanda Prahl 4 days ago