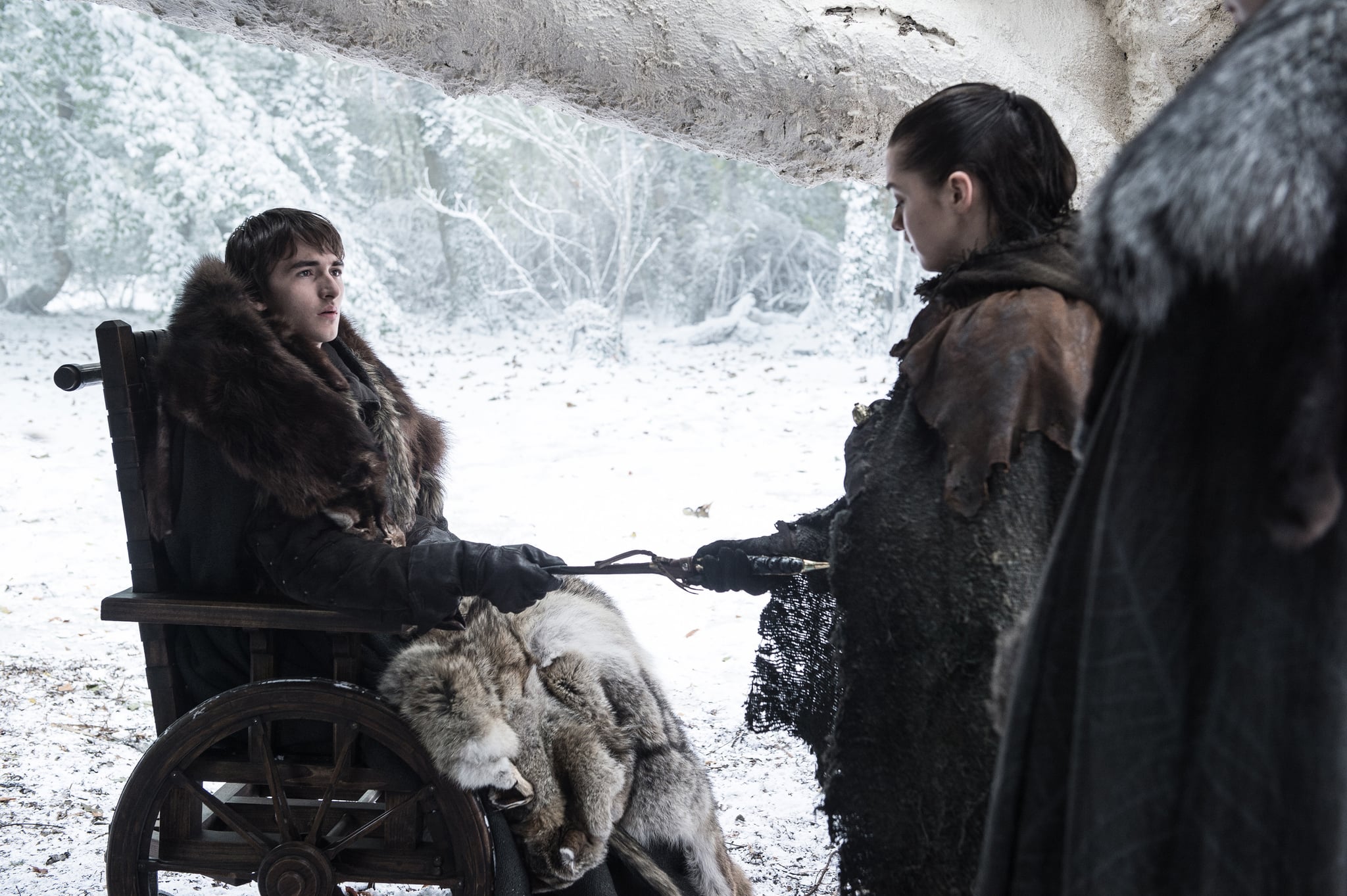 I don't think I'm alone in being irritated at how . . . off Bran Stark has been acting on Game of Thrones lately. After reuniting with his sister Sansa in season seven's third episode, a lot of fans were expecting Bran to fill her in on literally any of the mind-blowing revelations he comes to find out while roaming around beyond The Wall, or at the very least, give her a warm embrace (is that so much to ask?). Unfortunately becoming the Three-Eyed Raven has completely changed Bran's personality, leaving him prone to staring into space and blurting out seemingly random phrases. While the new tics might be annoying for a lot of people watching (*raises hand*), there is likely a method to Bran's madness. A very, very spoilery method.

During his bizarre conversation with Sansa next to the weirwood tree at Winterfell, Bran brings up the traumatic night Sansa was viciously raped by Ramsay Bolton after their wedding (not the greatest of icebreakers, my dude). In episode four, "The Spoils of War," he has a puzzling exchange with Littlefinger where he utters the phrase "chaos is a ladder," which is actually a line that the former Master of Coin says to Varys back in season three. Though the parameters of Bran's newfound abilities haven't been made totally clear, both of these interactions (as well as multiple instances in season six) prove that he can observe any event in the past. But does he have the power to see into the future as well?

As Reddit user mn_lax_man recently pointed out, the Three-Eyed Raven's abilities seem to be leaning more toward being omniscient, which could have some pretty startling implications for the show moving forward. See, if Bran can see what might happen in the future, everything he says and does from now on is technically foreshadowing.

While I doubt this theory means Littlefinger is going to chaotically fall from a ladder to his death anytime soon (lol), it does hold some weight when you take into account what Bran hands Arya in episode four. After Littlefinger gifts Bran the Valyrian steel dagger that basically started the War of the Five Kings after an assassin tried to kill little Bran with it in season one, he immediately passes it on to Arya. Now why would the Three-Eyed Raven take time out of his day to give his sister a thoughtful gift?

[EVERYTHING] Everything Bran does at this point... from gameofthrones

Well, Bran could just be giving it to his sister as a sign of brotherly love, but as mn_lax_man mentions, the gift might also have a way bigger thought process behind it. If he indeed is omnipotent (and can see the future), there's a chance he sees Arya going up against a White Walker at some point down the line. Because what kills White Walkers? Valyrian steel. His choice to give his sister the dagger also plays the theory that Arya is going to be the one to kill Littlefinger. Either way, it seems like Bran's motivations behind handing over the rare and important weapon will come into play in future episodes.

Since Game of Thrones has yet to clarify Bran's powers, no one can truly say whether or not this theory checks out. The only thing all of us know for sure is that it would be wise to start turning the volume on the TV up extra loud anytime Bran speaks from now on.

Netflix
The Most Intriguing Mystery of Jupiter's Legacy? The Group's Journey to Becoming Heroes
by Grayson Gilcrease 15 hours ago

Netflix
Wowza! The Cast of Jupiter's Legacy Look Completely Different Out of Character
by Kelsie Gibson 17 hours ago