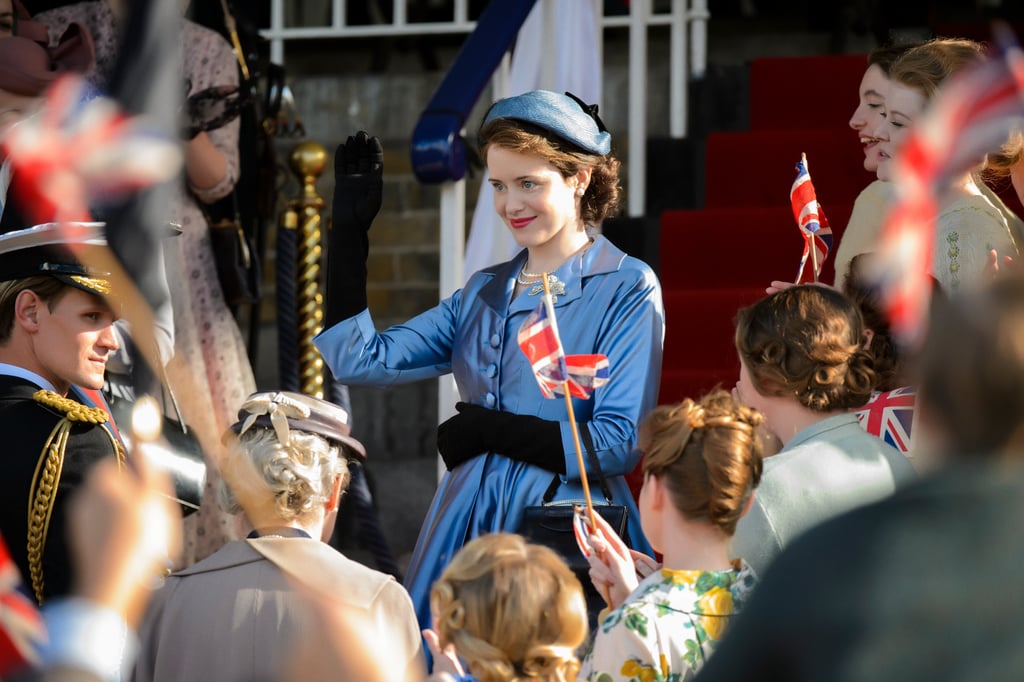 Newly minted Emmy winner Claire Foy is best known for her carefully crafted performance as Queen Elizabeth II in The Crown, but she's about to make a major splash in Hollywood. Now that she's passed the British crown over to Olivia Colman, Foy is set to star in two major blockbusters this Fall. First up, she'll star alongside Ryan Gosling as Neil Armstrong's wife in the astronaut biopic First Man. Then on Nov. 9, The Girl in the Spider's Web hits theaters. Based on the fourth novel in the famed Millennium series, the actress will undergo a total transformation from the Queen of England to cyberpunk hacker Lisbeth Salander. Before you head to the theater to catch Foy's new film roles, let's take a look back at the amazing career she's had so far.

Foy's first television role was a small appearance in the BBC paranormal drama Being Human in 2008. Sadly, her character doesn't make it out of the pilot alive. That didn't slow the actress down at all though. From there, she landed her first major role in the miniseries Little Dorrit. Based on the Charles Dickens novel, Foy starred as Amy Dorrit, a young woman who lives in a debtor prison where she cares for her father. Romance and tragedy follow, as is the way with all things Dickens, and as a result, Foy was given an opportunity to show her full range as an actress for the first time.

In 2011, the future star of The Crown landed the role of Anna in the Nicolas Cage film Season of the Witch. As a young woman accused of being a witch, Foy shined, even though the movie itself didn't resonate with viewers. Soon, the actress returned to her period drama roots in the '30s set Upstairs Downstairs and the '60s set White Heat. In 2014, she took on a different kind of period role in NBC's short-lived pirate drama Crossbones, where she played an adventurous woman torn between two very different men. She followed up Crossbones by going even further back in time to play Anne Boleyn in the critically acclaimed 2015 miniseries Wolf Hall.

Then, in 2016, Foy took on the role that made her a household name stateside and abroad and that would ultimately win her an Emmy in 2018. Foy landed the lead in Netflix's ambitious British royal family drama, The Crown. As the young Queen Elizabeth II, Foy allows viewers to watch a young woman transform into a powerful ruler, even as she continues to struggle with marital issues, being a mother, and not losing her sense of self. It's safe to say that The Crown took Foy's career to the next level and led to her film roles in the period romance Breathe, which costarred Andrew Garfield, and the psychological drama Unsane.

Now that Foy's time on The Crown has come to an end, she seems poised to become Hollywood's next go-to star, and that's good news for her many fans.

HBO
Obsessed With The White Lotus? You'll Love These Photos of the Cast Hanging Out
by Perri Konecky 17 hours ago

Madison Bailey
Listen Up, Pogues: JJ and Kiara Are the Real Outer Banks Endgame Couple
by Alyssa Grabinski 17 hours ago

Selena Gomez
Why Do Shows Still Think It's OK to Make a Joke About Selena Gomez's Kidney Transplant?
by Kelsie Gibson 21 hours ago

Movies
The Suicide Squad Isn't a Sequel . . . But It's Not a Reboot Either
by Amanda Prahl 22 hours ago