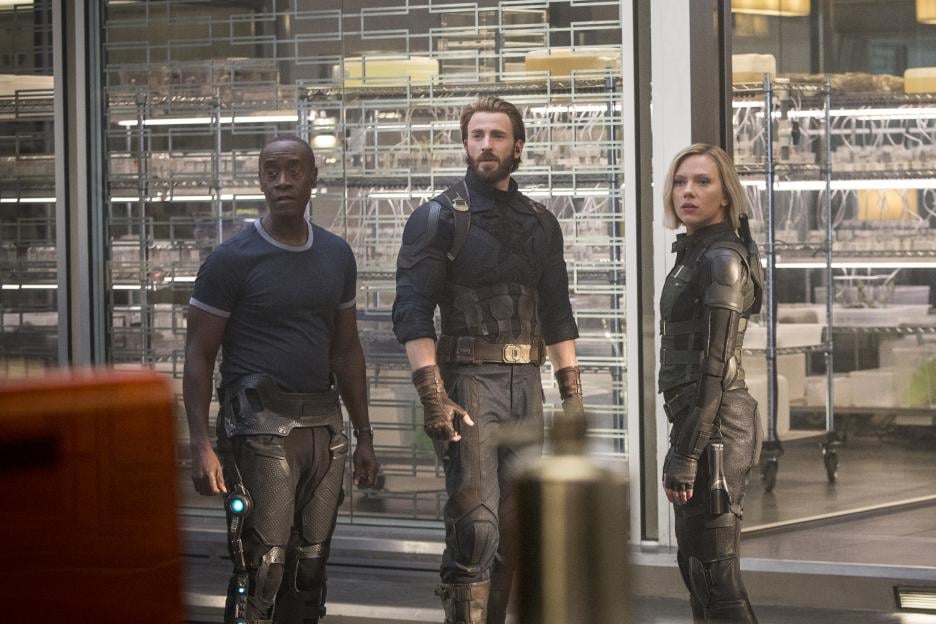 Sure, the last Avengers: Infinity War trailer might finally explain what villain Thanos wants, but I could barely bother to care about that after seeing Steve Rogers (Chris Evans), formerly Captain America, holding off a punch from the Infinity Gauntlet. EXCUSE ME, I was not emotionally prepared to have Steve's probable death thrown in my face in a trailer.

People have been worrying about Robert Downey, Jr.'s Tony Stark for a while, but honestly? I'm more worried about Steve. I'm carefully not calling him Captain America anymore because Steve apparently ripped off all the patches on his uniform associating him with the Avengers and America since he's, you know, a fugitive vigilante now. (He's probably going by Nomad even if torn-off patches aren't as impressive as that low-cut getup from the comics.)

Backing up for a quick history lesson: after the events of Captain America: Civil War, Steve turns his back on Tony Stark and the Sokovia Accords. In the moments after the final fight, as he helps best friend Bucky Barnes, newly armless, off the ground, Captain America drops the vibranium shield that is so much a part of his identity . . . and the superhero mantle with it.

Of course, "just a boy from Brooklyn" Steve Rogers would never give up fighting when people need him, which is why he never signed the Accords in the first place. As we see in the Avengers: Infinity War trailer, he's back in the action after arriving in Wakanda to a warm welcome from King T'Challa (Chadwick Boseman) himself. Princess Shuri (Letitia Wright) outfits him with a new shield to replace Captain America's and then it's back to the battlefield.

This is all normal. What isn't normal is the shot in the trailer of the Infinity Gauntlet, hosting two Infinity Stones, bearing down on his precious bearded face.

While actor Chris Evans is technically signed on for one more movie, next year's Avengers 4, there are a few ways he could still appear in it even if they kill Steve Rogers off in Infinity War. As comic book readers know, Captain America hasn't always been Steve Rogers — in fact, both Sam Wilson, aka the Falcon, and James "Bucky" Barnes, aka the Winter Soldier, aka maybe the White Wolf, have both donned the mantle over time. Flashbacks are always a possibility, too.

In addition to having backup Caps, there's one more tiny thing to consider: the green Time Stone. For the time being, at least, Doctor Stephen Strange posses the Eye of Agamotto. With the Time Stone, Strange has the ability to manipulate time, looping it and reversing it and doing who else knows what with it. If Steve Rogers does die in Infinity War, there's an easy way to bring him back for Avengers 4 right there. It might explain why he appears to be wearing the original Captain America suit from The Avengers in set photos from January.

When asked whether any of the deaths in the upcoming film will be permanent, though, President of Marvel Studios Kevin Feige told Entertainment Weekly, "I could always list off the characters that we've killed in our movies that haven't come back, but the big ones, which I know they're looking at . . . ? [Pause.] I would just say, yes. People need to be careful what they wish for."

At any rate, I'll be singing with my hands over my ears until April 27 while I pretend everything is fine and nothing is burning. At least I know I'm not alone.

If Cap dies and Bucky says "I'm with you" and Cap says "til the end of the line", I'm going to fling myself off of Stark tower

Me trying to hold onto the hope that #CaptainAmerica isn't gonna die pic.twitter.com/H86eyhVoxR

Like I love @CaptainAmerica so much. This moment got me. As has often been said #CaptainAmerica 's super power is that he is Steve Rogers #InfinityWarTrailer #infinitywar #AvengersInfinityWar pic.twitter.com/9ct3IowAH8

Before we get started, does anyone wanna get out? #CaptainAmerica

"I can do this all day" #CaptainAmerica just a kid from Brooklyn #AvengersInfinityWar pic.twitter.com/MJJmBGjt0g

IS THIS THAT SCENE WHERE BUCKY COMES OF SCREAMING POPPING HIS GUN?? OH GOD IS STEVE GONNA DIE pic.twitter.com/oaPDf2mvuw

"What if Bucky watches Steve di-"

"What if Tony dies saving Pe-"

"What if Thanos destroys Waka-"

Downton Abbey
A Look Inside the Real Villa Rocabella From "Downton Abbey: A New Era"
by Hedy Phillips 14 hours ago