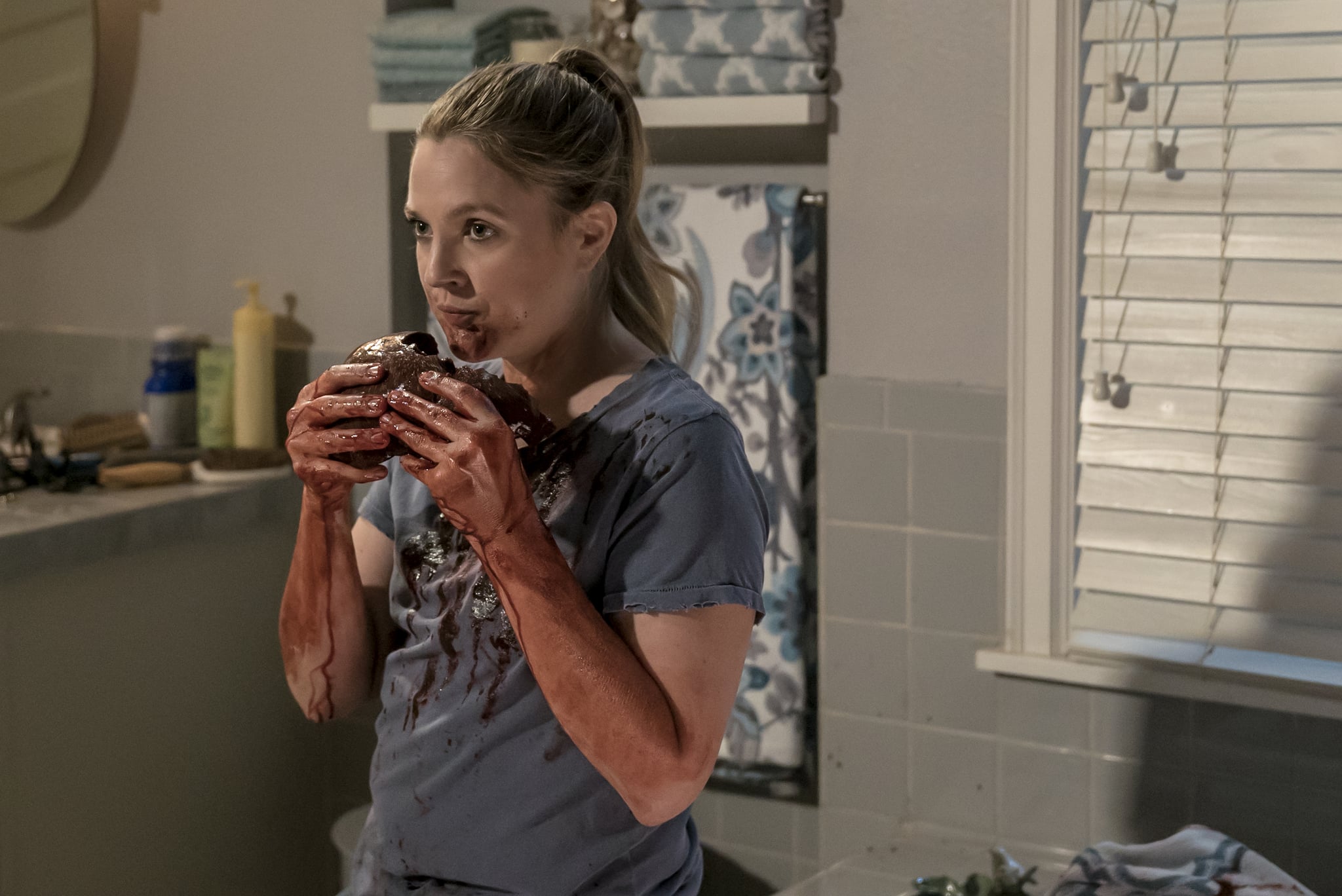 Netflix's new series, Santa Clarita Diet, follows a suburban, married team of realtors, Sheila and Joel Hammond (played by Drew Barrymore and Timothy Olyphant), whose lives are turned upside down when Sheila wakes up one morning . . . undead. The change happens quite suddenly and the Hammond family, including daughter Abby (Liv Hewson), go to great lengths to figure out what Sheila is, how she became that way, and if there's a cure. They ask their nerdy, teenage neighbor (Skyler Gisondo) for advice on all things supernatural and he lays down a few facts, however, most understanding of Sheila's condition comes from trial and error. At the end of the season, there are still many questions left unanswered about Sheila's zombie-like behavior, but here's what we know.

One morning, Sheila wakes up and goes about her day as usual. When drinking a smoothie, she begins to feel cramps in her stomach but dismisses it. Later that day when showing a house with her husband, Sheila projectile vomits green fluid everywhere. We're talking the walls, the floor, the ceiling — every surface of the bathroom is covered. In the mess, her husband notices a small red ball. They question what it is — an organ? — but never find an answer.

After the vomit debacle, Sheila begins to behave differently. Once a passive, meek, and responsible adult (who was kind of boring, TBH), Sheila now lives impulsively and uninhibited. She swears like a sailor, has an insatiable libido, is prone to fits of aggression, and is completely controlled by her id. She also has no heartbeat, doesn't bleed, and her body is filled with a black tar-like sludge.

What Does She Eat?

Among the other changes, Sheila's diet also alters. At first, she was satisfied with raw meat. If this had remained the case, the Hammonds could have lived a relatively normal life. However . . . this isn't the case. Once Sheila tastes human flesh, all other food repulse her and it becomes all she can eat. Her husband suggests many alternatives, including live, fresh meat (an annoying rooster, to be precise) and corpses, but it was all in vain. Once you go human, you don't go back.

Sort of. The Hammonds do their best to live a normal life, all in the hopes that one day Sheila will return to her former self. Joel takes it upon himself to find a cure and stumbles upon ancient, Serbian drawings in his research. The images closely resemble what happened to Sheila, so he pursues a connection aggressively. He comes across a scientist (played by Portia de Rossi) who promises a solution, more so than a cure, for the virus/disease. However, things take a turn for the worse before she can be of any real assistance.

The z-word isn't used explicitly. Their neighbor, Eric, argues that "zombie" is an "inherently negative" word. Throughout most of the season, Sheila is usually referred to as dead or undead. Yet, if it acts like a duck and sounds like a duck . . .

TV
Is Anyone Else Wondering What's Up Between Queen Alicent and Ser Criston Cole?
by Victoria Edel 3 hours ago