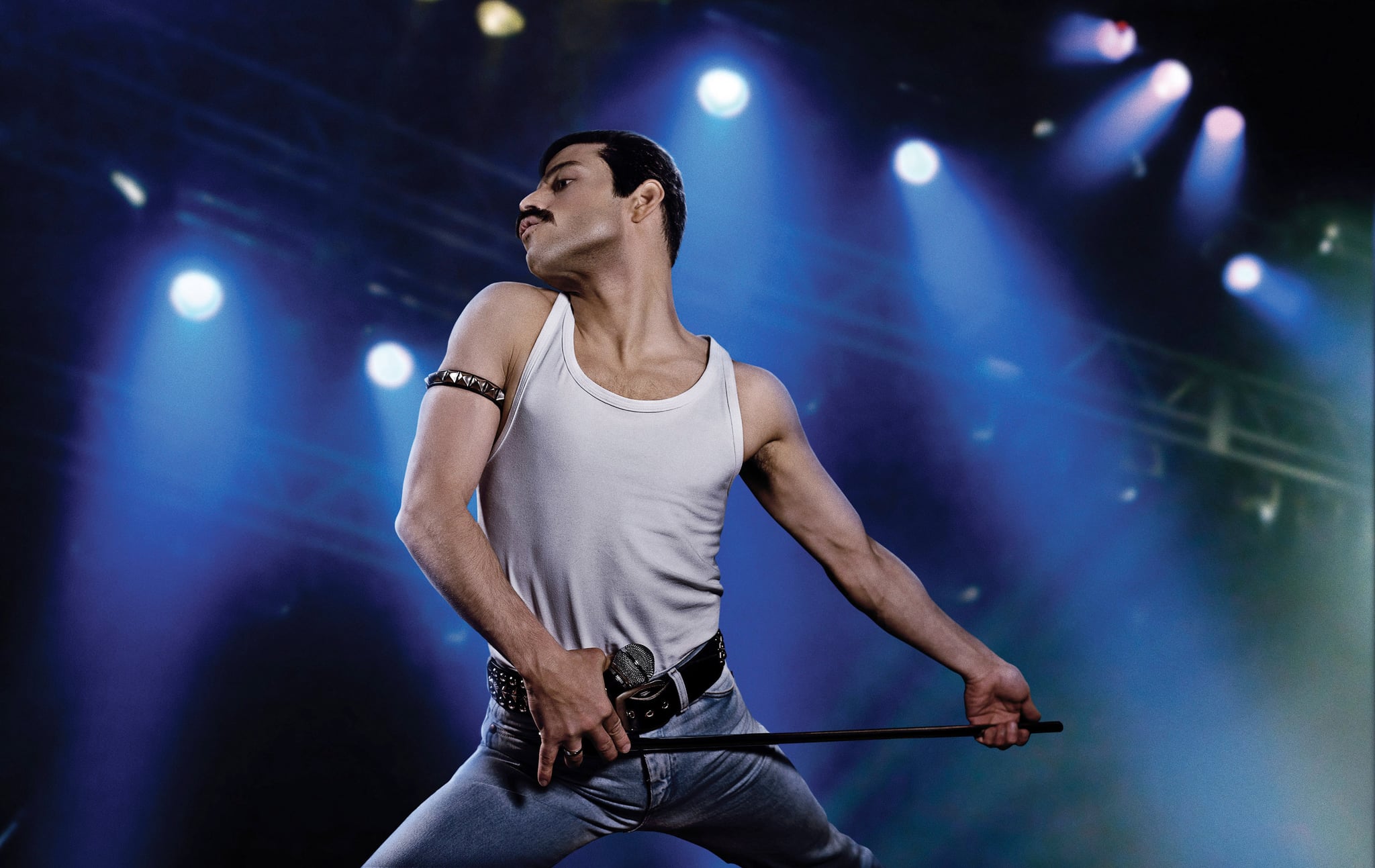 Drawn to Freddie Mercury's unparalleled voice and flamboyance, drawn to the song lyrics that have proved themselves indelible in our collective memory, like so many, I grew up idolizing the Queen frontman. This was before I knew about his sexuality — or even my own — but in many ways, it wasn't a secret. His performance of gender and masculinity was coded in queerness, nuances during the '70s and '80s that now, in hindsight, seem to scream with clarity.

At that time, Freddie Mercury wasn't able to be publicly out and have the career that he did. That's what makes the recent Queen biopic, Bohemian Rhapsody, a movie just as scared of his sexuality, so distressing. As the film, which won the Golden Globe for best motion picture drama and best actor for lead Rami Malek, continues to receive accolades, Hollywood is signaling that this is the gold standard for queer storytelling.

Related:
So You Saw Bohemian Rhapsody and Want to Revisit Queen's Hits? Here's the Full Soundtrack

On paper, the movie is a success: it's become the highest grossing LGBTQ+ film of all time. Hollywood replicates that which has a proven track record, so we're sure to see these same tropes play out on screen in the future.

For the greater part of our history, queer people were forced to identify each other through furtive glances and coded language; these were survival tactics. If we acknowledged ourselves directly with words or actions, we were opening ourselves up to danger. We see Mercury, played by Malek in the film, making suggestive eyes with a man, a stranger. The implication is that he'll follow him into a public bathroom for a hookup, though before we find out what happens, the camera cuts to a new scene. Much later, he's shown in a gay bar, surrounded by men in leather, though not engaging with anyone onscreen. In contrast, a different scene reveals Mercury approaching a woman at a concert. This is Mary Austin, his lifelong friend and confidant. They flirt, and Mercury later shows up at the shop where she works to ask her out. Later, they're laying on a couch, partially clothed, and Freddie proposes to her. It's a moment of intimacy, the type you go to a loud biopic about a famous rock star to see. But in the context of Bohemian Rhapsody, the lesson is that relationships with women are virtuous and are something to pursue, while relationships with men are something to hide.

This is, without a doubt, something that Mercury himself would have known during his life — it guided a great number of the things he did — but the movie fails by solely presenting the Freddie Mercury that was crafted and presented for public consumption, not the private Freddie Mercury who existed beyond closed bathroom doors.

Brian May and Roger Taylor, two remaining members of Queen that served as creative and musical consultants on the film, are complicit in this sanitized version of Freddie Mercury. This Mercury has been chewed on and softened to appeal to a wide audience, spit back up into something deemed palatable. It isn't May and Taylor's mission to let you into a new truth about this legendary singer; it's about preserving the legacy of Freddie Mercury and Queen. That means dropping the things that don't fit into a happy, crowd-pleasing narrative: Freddie's self-described passion for cocaine, polyamorous relationships, and a sex life that included romantic partners, casual partners, and sex workers.

Related:
OK, So We're Still Thinking About This Weird Detail From Bohemian Rhapsody

"To me, dullness is a disease. I need danger and excitement."

Mercury had an enormous sex drive. This was asserted many times throughout his life, and it's an important point lost in the movie. He was a man of excess, one of his defining characteristics, and that included sex. Speaking to the journalist Rick Sky, who interviewed Mercury numerous times over the years, he said, "To me, dullness is a disease. I need danger and excitement. I was not made for staying indoors and watching television. I am definitely a sexual person. I used to say that I would go with anyone, but I have become more choosy. I love to surround myself with strange and interesting people, because they make me feel more alive. Straight people bore me stiff. I love freaky people."

This side of him is certainly portrayed in the movie, but it's never a cause for happiness. To be queer is to know torment, never joy.

Bohemian Rhapsody keeps Mercury in the closet, showing only rare, positive glimpses of his queer life (relating to sex and otherwise), and in doing so, the movie paints his queerness as his undoing. Contrary to what the movie shows, Mercury never came out to his parents. He never made an official confession to the other members of Queen about his HIV status. He very deliberately kept the queer parts of his life separate, so despite having members of Queen consult on the film, the movie results to simply presenting the most stereotypical aspects of queer life, and it does so by coating them in shame. Mercury's undoing, in reality, is spurred not by his queerness but by living in a judgmental, intolerant world that required him to hide his identity. 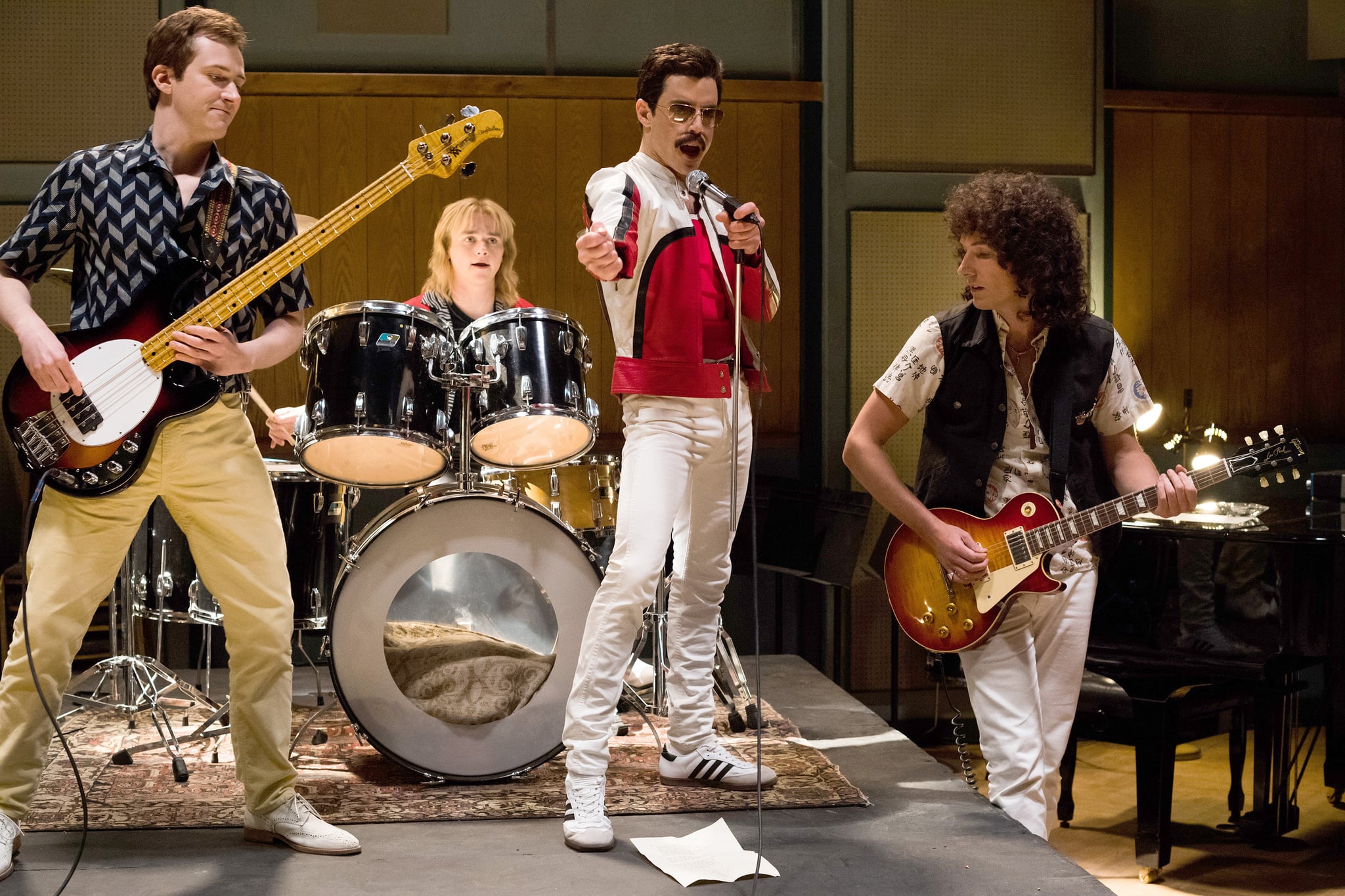 The film does further damage by depicting Paul Prenter, Mercury's friend, and for a time his manager, as the film's villain, complicit in Mercury's downfall. Prenter pulls Mercury away from the band, pushing him toward a solo record deal by way of lies and deception. He plies him with drugs and alcohol. He also drives a wedge between Mercury and Austin, his rock. It's in these moments, when Prenter is guiding Mercury toward the queerest point of the film, that his life spirals downward. Despite the booze, the drugs, and the casual sex, Mercury is presented to the audience with dead eyes. This queer new world is a soulless one.

Related:
Lucy Boynton on Playing Freddie Mercury's Muse, and the "Complexity of Their Relationship"

The character of Paul Prenter falls into a long history of queer (and queer-coded) villains in cinema. Queer characters have been so infrequently represented that it is in these villains that many LGBTQ+ people saw the first glimpses of themselves onscreen: the murderous cannibal, Dr. Frank-N-Furter of The Rocky Horror Picture Show; the exuberant yet mincing Jafar from Aladdin; and Jame Gumb (aka Buffalo Bill), the serial killer in The Silence of the Lambs. With Prenter operating at the height of his villainy, Mercury contracts AIDS and it is in relation to AIDS that the film feels most comfortable fully exploring his sexuality.

When Rami Malek told Into in October that Mercury never thought of himself as a queer icon, that he never wanted to be "boxed into anything," it presupposes that he had any other choice. Mercury couldn't be open about who and how he loved during his life, and it's a shame that with all the progress we've made since his death, this movie, which will be seen as a definitive testimony of his life, is only half the story.