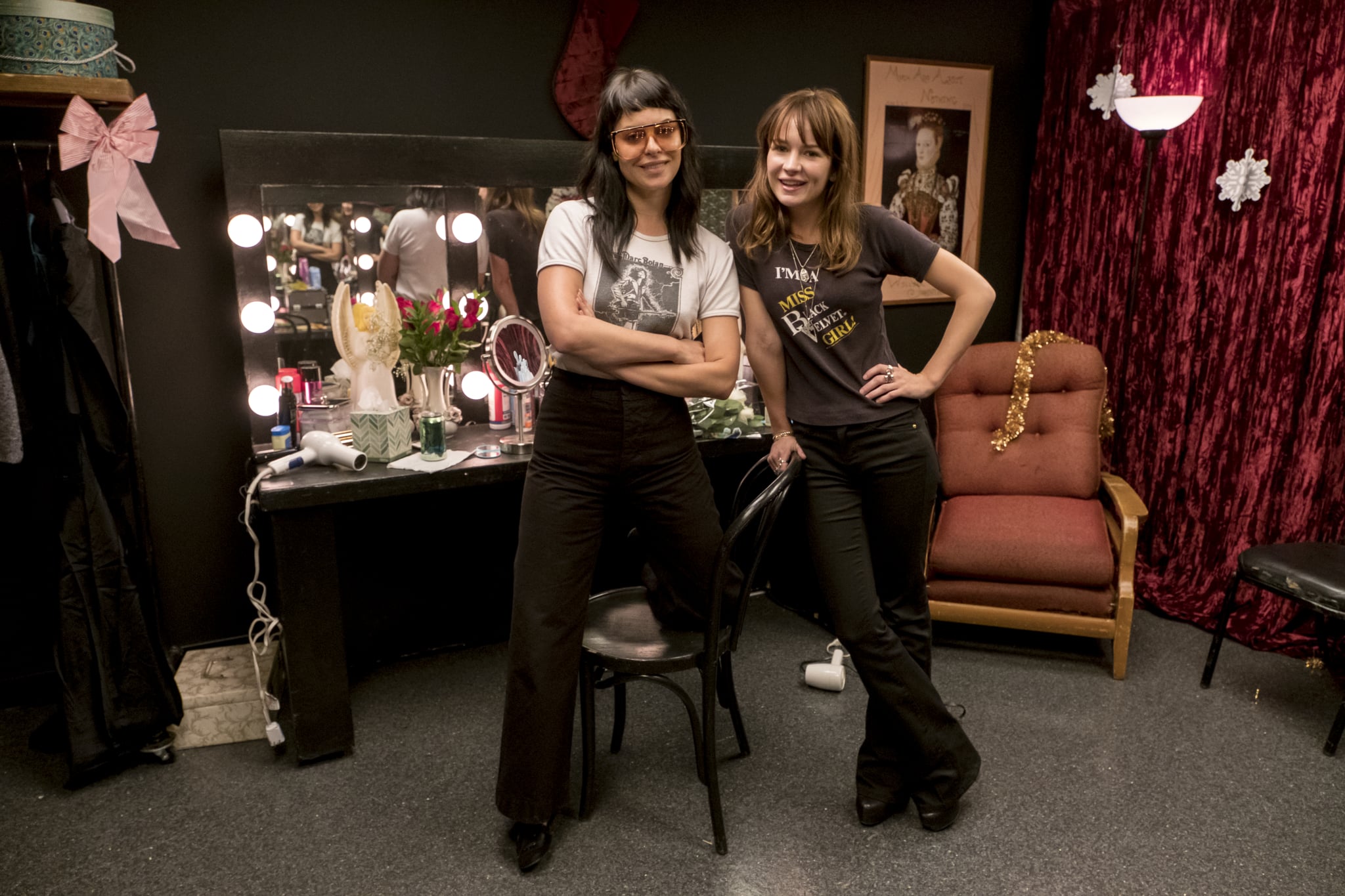 When we meet Girlboss's Sophia — a 23-year-old wild child barely, albeit tirelessly, scraping by in San Francisco in 2003 — she's pushing her stalled, rusted, junk bucket of a car up one of the city's infamously steep streets. Sophia, played by the charmingly caustic Britt Robertson, looks barely big enough to push a shopping cart of vintage clothes around a thrift store, let alone a vehicle. Still, she handles her "sh*tburger" of a situation with the same ferocity she approaches every hurdle in her life, which includes getting fired from her boring job at a shoe store, storming out of a tense dinner with her dad, and foraging for day-old bagels in a dumpster.

While watching the new Netflix show you might find yourself worrying that Sophia, with all of her tantrum-throwing and middle finger-giving, is in constant danger of burning out. She's a woman on the edge, an anti-heroine who is loud and brash and unapologetically stomping her way through life. This makes her incredibly fun to watch, of course, in part because we already know how this story ends; the show is a "real loose" interpretation of #GIRLBOSS author and Nasty Gal founder Sophia Amoruso's meteoric rise to e-commerce fame. We know TV Sophia's fashion empire will eventually take off, but what about the fact that real-life Sophia's site filed for bankruptcy in late 2016, leaving her fortune and reputation in shambles?

For Pitch Perfect writer and Girlboss creator and showrunner Kay Cannon, the hardship that Nasty Gal and Amoruso have gone through made telling this rags-to-riches (to something else entirely) tale that much more important. "[As women], there is a fight ahead of us," she told a group of female journalists, who all crammed into an NYC hotel room to speak to her, Amoruso, and Robertson. "I'm proud that this show is coming out, and I'm proud of the message that it's sending. Hopefully [it gives] all women permission to take risks, to dare to suck and fail, and to pick themselves back up and face things. Hopefully it will empower and inspire women." 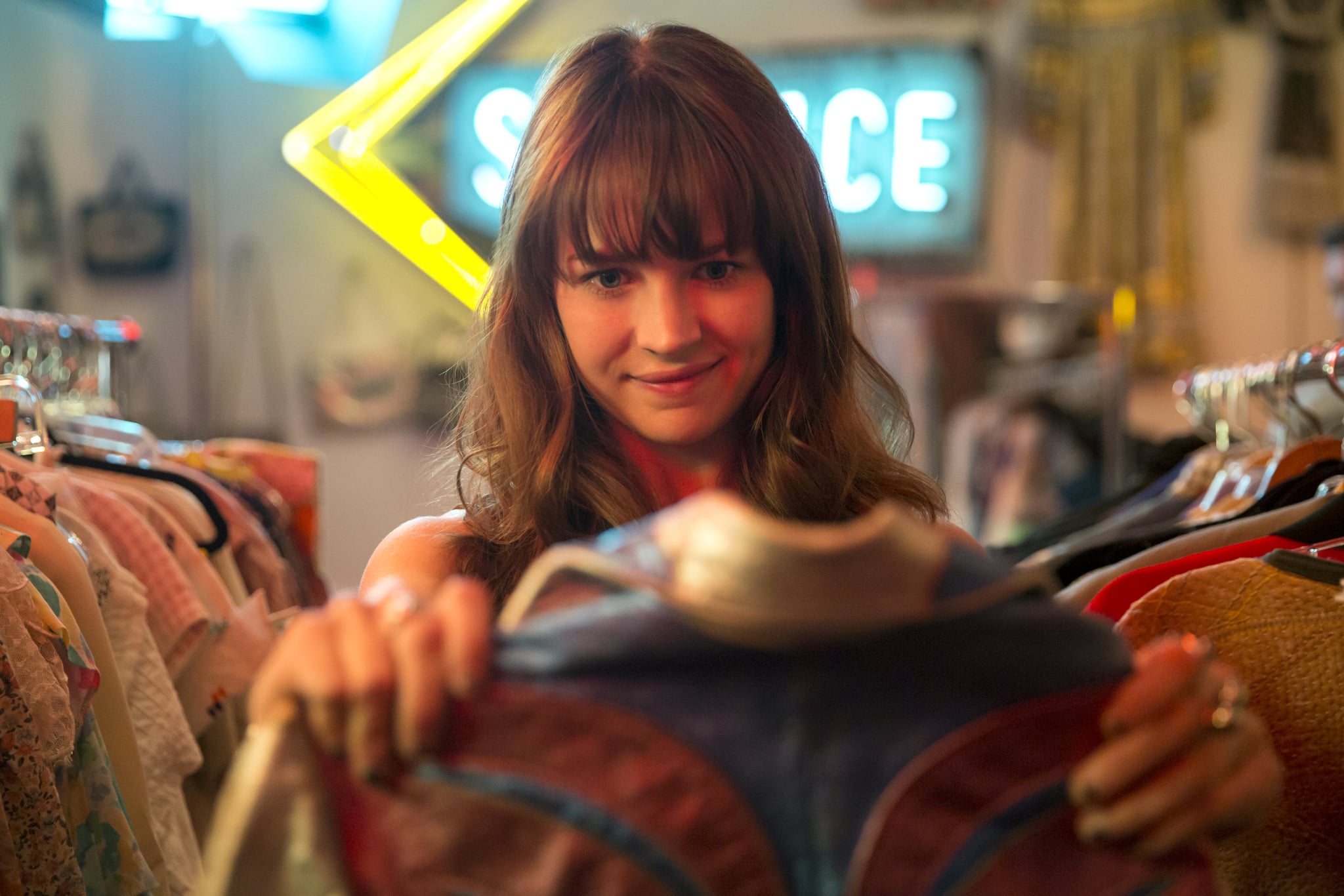 Failure, or at least the fear of it, is a big theme in every episode of Girlboss. But Robertson plays Sophia with an almost manic, live-wire energy that not only makes it easy to root for her, but also impossible to believe she'll ever do anything other than succeed. "Okay. Go ahead. Underestimate me," she spits at a snide thrift store owner (played perfectly by Jim Rash, FYI) in episode two. "It's just what I want. I feed off that sh*t."

For a lot of women, being underestimated is an everyday occurrence. It's a topic that came up multiple times in our conversation with Cannon, Amoruso, and Robertson back in February, especially with the sting of Hillary Clinton's election loss still fresh after the presidential inauguration. Each half-hour episode of Girlboss isn't trying to preach some grand lesson about feminism or overcoming adversity as a woman, and it probably wouldn't work as well as a show if it tried. Instead, it's a portrait of a young woman who's scared of growing up ("Adulthood is where dreams go to die"), but muddling through it anyway. For the millennial audience in particular, who will no doubt flock to the show, who among them can say they haven't felt those same fears at some point in their lives?

"If seeing someone fail at scale gives other people confidence to go do that on their own, I'm happy to be a guinea pig for that."

According to Cannon, Sophia the character is Sophia Amoruso cranked up a few notches. It's a true story, but there "was a lot of fabricating that went on" to make what happened funnier and to dramatize things. The core of her story, however, is still very much the same, and it was one that Amoruso was eager to have told. "It's important for women to tell their own stories," she said. "And this is very much women telling their story, which I don't think happens as much as it normally should." By age 32, Amoruso's one-year marriage had ended, and her company had filed for bankruptcy. By anyone else's standards, both events would be seen as massive failures. To Amoruso, however, it was an opportunity for growth and self-reflection. "If seeing someone fail at scale gives other people confidence to go do that on their own, I'm happy to be a guinea pig for that. I'm just going to try not to fail all the time."

Since arriving on the Hollywood scene in the early 2000s, Robertson's steady career has been considerably less flashy than Amoruso's, but the 28-year-old Tomorrowland star can hardly be considered a failure. No, she's not a household name quite yet, but with Girlboss just days away from entering 94 million homes in 190 countries, she will be soon. Like Amoruso she still cites failure as being "more important than success," but she also has a strong female safety net to rely on. In addition to Cannon and Amoruso, executive producer Charlize Theron has been an incredible force in her life since starting the project. "Charlize has been really crucial in this experience," Robertson revealed. "She was instrumental in allowing me to be an actor and create this character, and reminding me that that is my job. I don't have to be impersonating [Amoruso]. It was nice having her on the show, based on her experience and the fact that she's been as successful as she has. She's a strong 'girlboss' of a woman. I look up to her."

Theron has made a living playing complicated, "unlikable" women, like Mavis in Young Adult and Cipher in the upcoming The Fate of the Furious, and there are echoes of her past performances in Robertson's Sophia. Is she a little morally bankrupt? Yeah, a bit. Is she messy? Hell, yeah. Most importantly, though, she's the boss of her own life. She, as well as her real-life inspiration, are proof that one big f*ck up doesn't mean the end of the world, especially if you happen to be a woman. Love her, hate her, or love to hate her, that's a message we could all use a little more of on TV. Now, more than ever.

Watch Girlboss when it hits Netflix on April 21.

Netflix
You'll Want to Get Familiar With Philemon Chambers, aka Nick in Netflix's Single All the Way
by Njera Perkins 7 hours ago