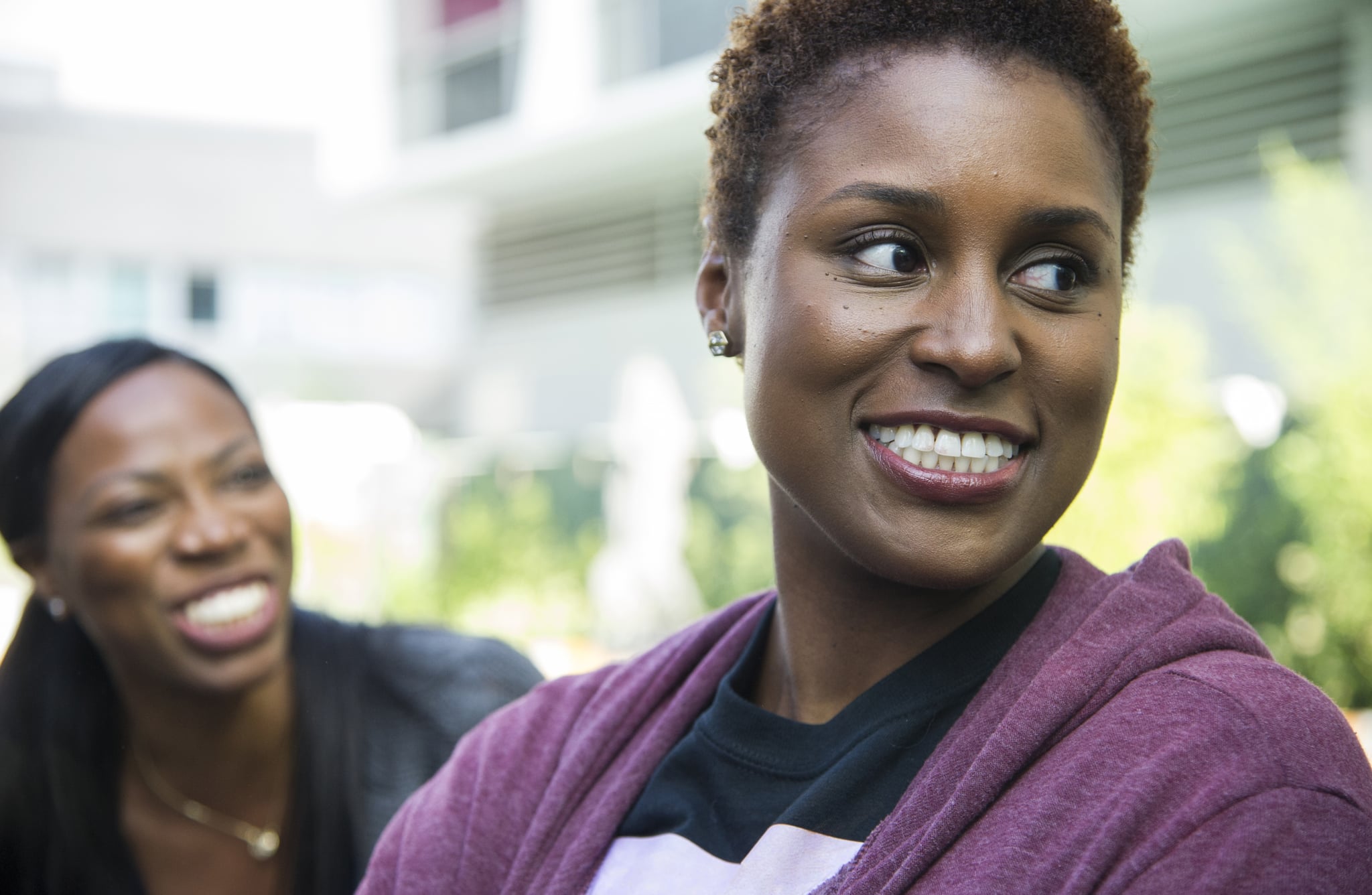 As I walk into a bright, sunny conference room and sit down across a table from Issa Rae, I'm suddenly overcome by the urge to start chatting with her about the weird thing my boyfriend did that morning and ask if my outfit looks ridiculous. Since we've never met before and I'm not a total crazy person, I resist, but it confirms what any fan of the comedian's web series, The Misadventures of Awkward Black Girl, already knows to be true — she is, without a doubt, the friend you've always wished you had. Her new series for HBO, Insecure, has been a long time coming, and follows Issa (an exaggerated version of the actress) and Molly (Yvonne Orji), two women figuring out LA life one uncomfortable moment at a time. The show celebrates black female friendship in a way that few other shows on TV right now have even attempted, and in a sea of reboots and sequels, Insecure's originality and authenticity should be viewed as nothing less than a triumph.

POPSUGAR: Congratulations on your new show! What has this whirlwind of a process been like?
Issa Rae: It's been nerve-racking, but extremely exciting. I'm just really anxious for people to see more episodes. Talking to [the press] is great because you've seen more, as opposed to just the pilot, but now that the pilot is out there, I just want to be like, "There's more guys!" And the team around it, I'm just so excited. I feel like I'm on a journey with great people.

PS: Since the pilot has come out, have you had any interactions with fans talking about the show?
IR: Anytime that people say they relate, or "I am you, I'm your character," or "I'm Molly," or "Oh my god, this is exactly what I talk about with my girlfriends," that makes me feel like we're touching a nerve in a great way. That's all I really wanted. For people to connect with it, and for them to feel like they know the characters, and they've been through certain similar situations. That's exciting for me.

PS: Was the opening scene of the pilot when Issa is standing in front of the classroom of kids pointing out all of her insecurities inspired by any specific instance in your life or cathartic in a way?
IR: Pretty much. A lot of those questions I had gotten in real life, and they were playing off of insecurities that I've had from middle school to now. The hair issues, identity issues, relationship issues . . . and kids are the perfect people to do that with, because kids are so jerkily honest, you know? That's just something that I wanted to reflect, because then you know immediately who this person is, and what her biggest perceived flaws are.

PS: Despite shows on TV right now having black female leads, like Scandal and How to Get Away With Murder, there doesn't seem to be a whole lot of shows celebrating black female friendship in the way Insecure does. Was the bond between Issa and Molly something you wanted to showcase from the beginning?
IR: Yeah, I wanted it to feel like you were smack dab in the middle of their friendship. You understand that they support each other, that they're ride or die for each other. You're kind of on their side. They have a real friendship, and real friendship is being able to be honest with one another, to a degree, and knowing that you'll still be friends the next day. You may not like what you hear, you might be mad for a time, like, "I hate that you told me that about myself, but you're right and I'll still be there for you at your sister's baby shower with a gift in hand." I love that kind of friendship because it is so real and so pure, and we don't really get a chance, as you said, to see that with black women specifically. That was something that we definitely wanted to showcase throughout the season.

PS: There are definitely some tough scenes throughout the first few episodes, whether they're fights between Issa and Molly or the ones Issa has with her boyfriend, Lawrence. Do any of them stand out to you as your favorite, or one that was particularly challenging?
IR: Sex scenes were a challenge to shoot, just because they're so uncomfortable. There are a couple of emotional scenes that we have throughout the series, and since I'm mostly a comedic actress, I had to tap into different areas. When I'm writing [those scenes], it's all great; we're in the writers room and I'm like, "Oh my gosh, this is gonna happen, and then this is gonna happen," but I didn't think about actually having to play that out. I had to get into the zone, and try to construct the days where we shot more emotional moments in the day so I didn't have to go back and forth, because this is all still really new to me. 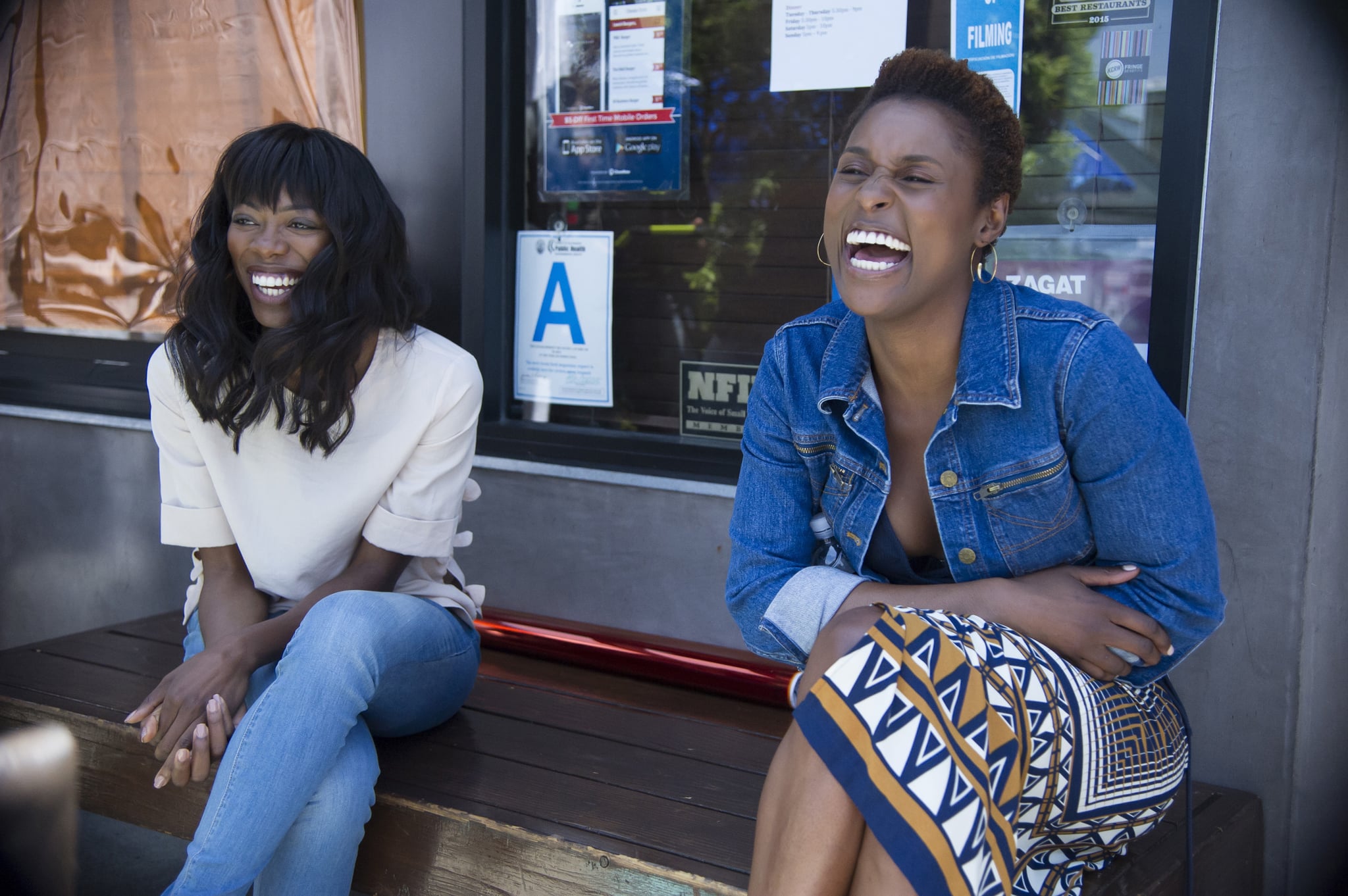 PS: Like you just said, your roots are in comedy with your YouTube series The Misadventures of Awkward Black Girl and your memoir of the same name. Since you've done so much work that's pretty autobiographical, I'm wondering where you draw the line between yourself and her as a character.
IR: She's basically me if I didn't know what I wanted to do, and if I made different decisions in life. I say 75 to 80 percent. I think I'm a bit more empathetic than she is, and I'd like to say that I wouldn't put my friends on blast in the way that she did in the pilot, but I probably have. I've probably done that to a degree. She's generally my essence, for sure.

PS: As the season goes on, South LA feels like almost its own character in the show. Was it important to you that the show take place there?
IR: For sure. I wanted to display the neighborhood that I grew up in. I live in Inglewood now, and it's crazy to think that this series is already a time capsule. So many of the places, like Roscoe's Chicken and Waffles, that we feature in the show are moving. There's a place where we shot the pilot — Maverick's Flat, that seedy 1997 Inglewood spot, is on sale for $3.75 million. There are just so many things that are changing, and that's something that we're working through throughout the series, too. The gentrification of South LA. I didn't know then how much things were going to change, I just wanted to show my neighborhood and my part of LA is just as sexy as Beverly Hills or Hollywood. It helped that my showrunner, Prentice Penny, also grew up in the same neighborhood as I did, Windsor Hills and View Park, and felt the same way. He knew exactly what landmarks I was talking about, and which intersections of the streets, or what mural I was talking about. That made for a very seamless working relationship.

PS: So were you able to actually shoot in those locations, as opposed to on a sound stage? When you watch it, it feels really authentic.
IR: That's a great question! For the pilot, we got to shoot all on location, but for stuff like We Got Y'all, we ended up building a set. The law office, we went downtown, but the apartment we ended up building, too. That was more for budget reasons, but I wanted to be on location, and I had to fight so many times to be like, "No, I don't want to pretend like this is Baldwin Hills, I want to be there." That matters for the essence of the show, because there's just an authenticity there that you don't get if you build a set or fake it.

PS: Did you pull inspiration from any specific shows, or even from fellow comedians, when you were crafting your vision for the series?
IR: I'd say all of '90s television influenced me, like Living Single, The Fresh Prince, Martin, and New York Undercover. And I loved Seinfeld and Curb Your Enthusiasm just in terms of highlighting really small moments and making them bigger. 30 Rock and The Office, both the American and the British versions, those kind of shows kind of shaped my comedy and what I thought was funny. And Ellen DeGeneres as a comedian, she's so good. Her comedy specials from the past . . . I wish she would just go back into comedy. She's so good at mining awkward moments and her own insecurities, and it's just so wholesomely funny. She's always been an inspiration.

PS: I'm sure you're going to be incredibly busy with the hype around Insecure, but do you have plans to expand your work with the Color Creative organization at all?
IR: Well, now other production companies and organizations are reaching out to us and really trying to actively trying to hire writers of color. If they have a movie idea that they want a new perspective on or a different version of, they'll tap into our women writers and our writers of color to see if there's a fit. That's great, and a place we wanted to get to. We've been collaborating with other production companies to create content, so we just worked with Project Greenlight digital studios and finished a web series helmed by three women of color. They did a fantastic job, and just watching them work together and bond and feel confident enough to go and pursue other things is what makes it all worth it.