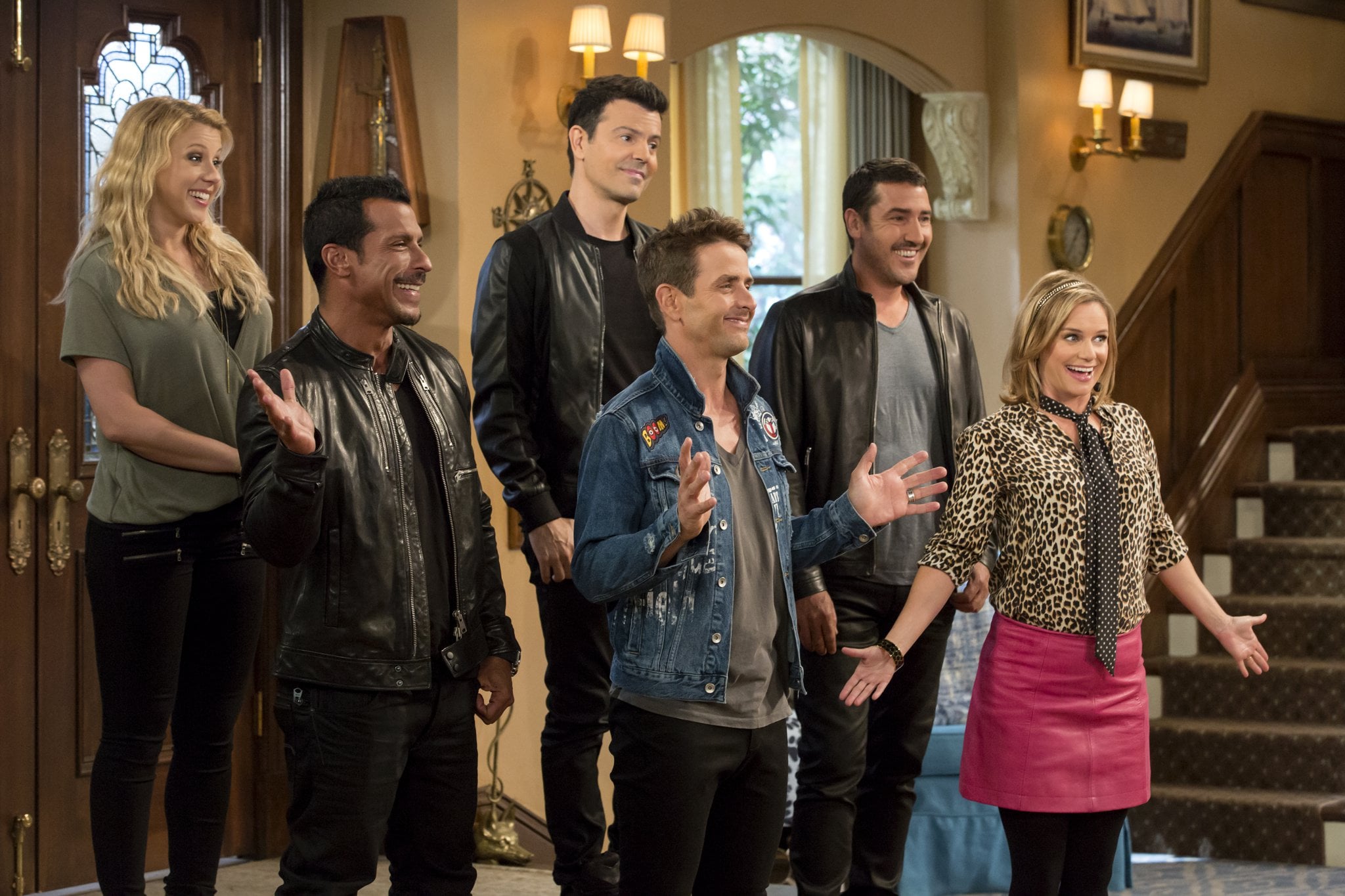 The first season of Fuller House was an almost instantaneous hit with fans of the '90s original, Full House, but since premiering earlier this year, the show has learned to stand firmly on its own two feet. With the arrival of season two just days away, we sat down with Jodie Sweetin and Andrea Barber (aka Stephanie Tanner and Kimmy Gibbler) to get the skinny on what's in store for the Tanner family. From nostalgic guest stars to holiday-themed episodes, they confirmed that the series is going to keep bringing the fun, laughs, and family moments that may or may not bring you to happy tears.

POPSUGAR: So, generally, what's in store for you guys in the second season of Fuller House? Can you talk about what will happen with Steph and Kimmy?

Jodie Sweetin: We have all kinds of fun things! Steph sort of settles a little bit more into her role as a sister and aunt, and grounds herself this season. The first season was about Steph coming back after having traveled the world, so that's fun. I get to be a little bit more involved in the dynamics of the house and the kids' lives. And Steph gets a relationship, which was really fun! We also have all the amazing holidays, Thanksgiving, Christmas, Halloween, and New Year's, so we got to play with that.

Andrea Barber: And there are some good family themes, too. We've got big milestones, like a first kiss for one of the kids, and then just some everyday sibling conflicts and going back to school. It's a very family-centered and holiday-centered season.

PS: Is there any '90s icon that you guys would love to have on your show?

AB: New Kids on the Block finally made an appearance on our show, which is a 30-year dream come true. We were all die-hard "Block Heads" back in the day. We couldn't even get the rights to a t-shirt 30 years ago because they were so big. The fact that they've reunited and we've reunited . . . it was just a great time for them to be on the show, and just fulfilled every one of my teenage dreams.

JS: It was hysterical. They were like giggly, 13-year-old girls for the whole week.

PS: Do you think there's anything in this season in particular that loyal fans are really going to appreciate?

JS: We have a few surprise guests that come back from the original show. Marla Sokoloff comes back as Gia, which is great because all of my Instagram posts have been like, "Oh my God, is Gia coming back? Is Gia coming back?" Finally, we can say yes, she's coming back. Yeah, we have a few other people who are coming back from the original show that were not necessarily main characters, but they were characters that die-hard fans will see and be like, "Oh my God!" We also have fun guest stars coming down, like Andrea was talking about New Kids on the Block, and Alan Thicke is coming on for a guest appearance. We also get to meet Kimmy's brother, Jimmy Gibbler, who is amazing. You know, there is a lot for not only fans of the original show, but fans of just Fuller House to really enjoy as well. 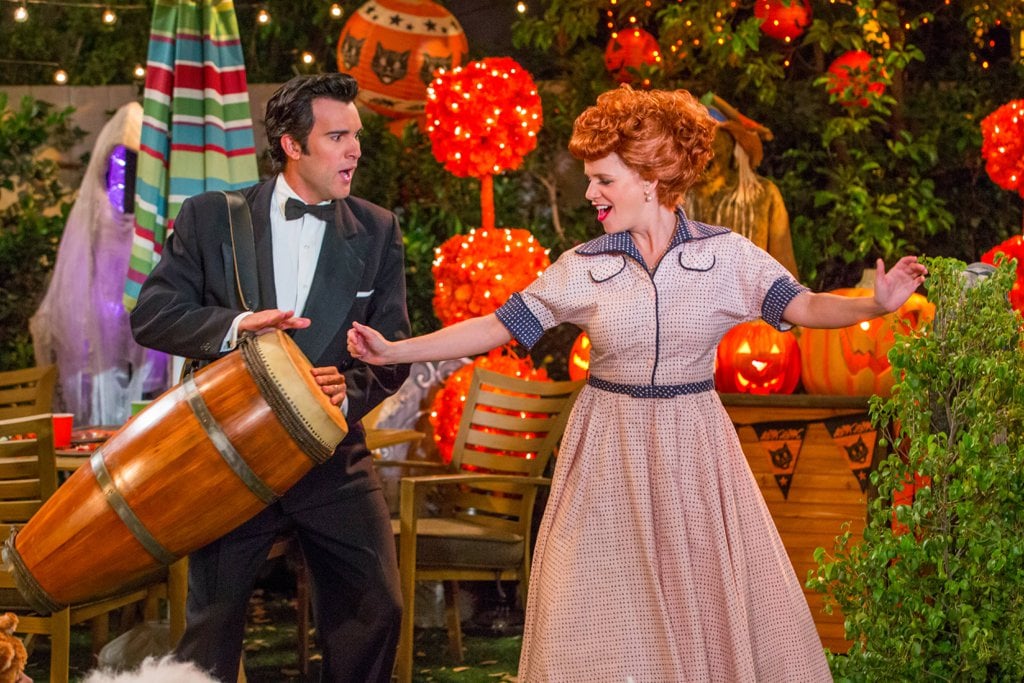 PS: Is there a specific reason Kimmy's family is being brought in this season?

JS: We needed to give Kimmy a little bit of a backstory, you know? We've always talked about Kimmy's brother, we've talked about the Gibblers, but we've never really met any of them. I feel like for Kimmy this season, getting to kind of see just how crazy the rest of her family is — well, at least one other member of her family is — is pretty fun.

AB: People have been asking me since the original series if we'd ever get to meet her parents or her siblings, 'cause Kimmy was such a bizarre character. She just walks into the house like "I don't care if you're in your underwear, eating cereal, I'm just gonna come in," so it'd be like, "Who does this child come from?" It's always been a question in everyone's mind, so I was thrilled when Jeff Franklin, our creator and executive producer, said we're finally gonna get to meet your brother this season.

PS: I know you guys mentioned all the holidays that we'll get to see this year. Were those themed episodes fun to film?

AB: They were all fun. The Thanksgiving episode, everybody comes back; the original cast, all the new characters, and we get to meet Joey's family in that episode as well, so the house is very full. The Fuller House is even fuller, if that's possible. There's one scene in particular, which I think holds the record for the most characters and speaking parts in a single scene, so that was a beast to film, that scene.

JS: We were sitting at this giant round table during the Thanksgiving scene, and it was literally like having Thanksgiving dinner with everybody in real life. Like an old family, you know? Silly arguments. Maybe not arguments, but silly bickering that came up from like 30 years ago. Like, "Remember that time? And that time?" So it was like, oh my gosh, this really is what our Thanksgiving would be like with our crazy large, giant, odd family, you know? It was really fun.

AB: Everyone talks over each other, the baby's crying, we're passing food and spilling it . . . like it really was Thanksgiving. Then they'd call cut and we'd have to reset all of that, and do it all over again.

PS: Since you guys have played this big family for so long, do you have a close vibe on set, or hang out outside the show?

JS: We're kind of with each other all the time. For instance, I just saw [Andrea] a couple of days ago when we went to Universal's Halloween Horror Nights, and we saw each other the week before that. Even on hiatus weeks, we're together. Like, we [plan] our vacations together. We're going on vacation in December! We spend a lot of time together as a cast, and I don't think that that's as common as it is with ours, especially after a 20-year hiatus. We've never lost touch.

AB: The cool thing for me is that we were so close on the original series, growing up as the kids, but now that we're the adults on Fuller House, it feels like it's that same family vibe. Even within the kids on the show now, the new kids and the new characters that are on the show, it still has that close, tight-knit, family feel. It's great that we've been able to replicate that, even though some of the characters have changed.

Netflix
Netflix's Strip Down, Rise Up Trailer Explores the Powerful Healing Effects of Pole Dancing
by Chanel Vargas 1 day ago