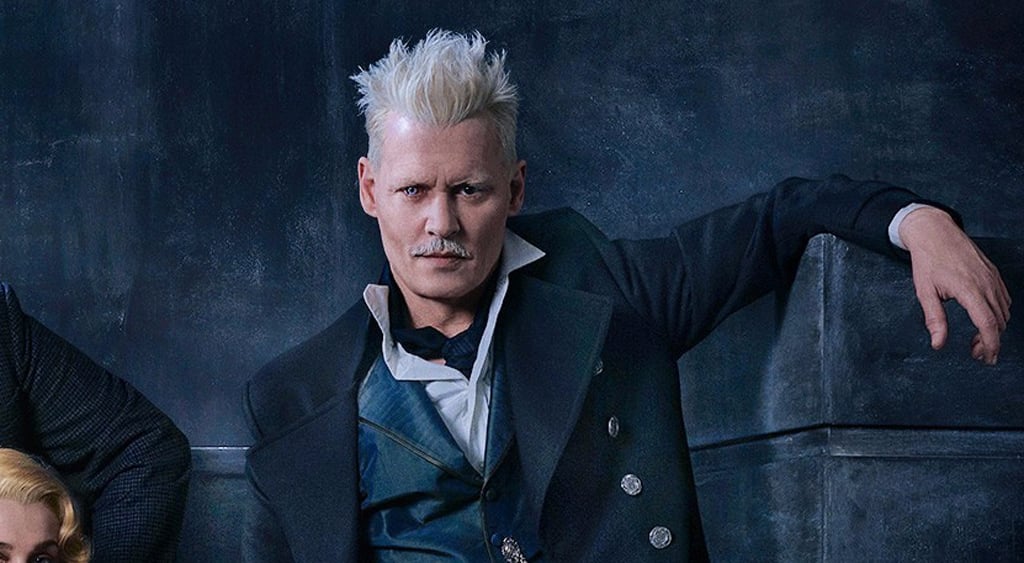 The sequel to Fantastic Beasts and Where to Find Them — the recently titled Fantastic Beasts: The Crimes of Grindelwald — has a problem that no amount of magic, movie or otherwise, is capable of fixing.

A gorgeous photo of the film's cast was recently released, and while the addition of a few new characters is exciting, one familiar face has loyal fans of J.K. Rowling's story outraged: Johnny Depp. His appearance in the promotional photo shouldn't come as a surprise to anyone who's seen the first movie; at the end of Fantastic Beasts, Colin Farrell's Graves is revealed to actually be the evil wizard Grindelwald in disguise, played by Depp. It's a shocking moment that kicks off the narrative for the next four films, which will follow the climactic clash between Grindelwald and a young Albus Dumbledore (Jude Law). In other words? Depp is going to be a part of this franchise for a long time, and fans are deeply unhappy for one very understandable reason.

In 2016, Depp was embroiled in a contentious divorce from Amber Heard that dragged on for months before ending with disturbing domestic abuse allegations. Heard alleged that Depp "violently attacked" her on a number of occasions and that during the "entirety" of their four-year relationship, Depp was both "verbally and physically abusive" to her. One of her close friends even came forward with a gut-wrenching essay about witnessing her abuse firsthand, and photos of Heard's bruised and battered face were also released. Depp contested the allegations, and following the settlement of their divorce, Heard withdrew her request for a domestic violence restraining order.

Related:
Amber Heard Recalls Coming Out as Bisexual: "I Became Attached to a Label"

For many, the situation felt like the same old, same old as far as Hollywood is concerned — a man accused of brutal violence against a woman escapes from the fallout with his career unscathed and no punishment for his (alleged) actions. Depp and Heard's breakup happened only last year, but if it had occurred in a post-Harvey Weinstein Hollywood instead, would his career still be flourishing? Would he have gotten a role in a traditionally feel-good, family-friendly franchise like Fantastic Beasts? Sure, the allegations cast a nasty shadow over Depp's future film roles, but that hasn't stopped studios from casting him in everything from new Pirates of the Caribbean films to Murder on the Orient Express.

Plenty of fans of the series wasted no time in voicing similar opinions on Twitter following the release of the cast photo. From describing how betrayed they feel by his appearance in the Harry Potter universe to wondering how Rowling, a victim of domestic violence herself, would sign off on his role, the reactions were strong.

@FantasticBeasts , as an avid #HarryPotter fan it upsets me that you haven’t recast #JohnnyDepp in light of the abuse accusations against him. It’s hard to support something I love so much with an abuser involved. #FixIt pic.twitter.com/ZHJE3fUm3M

Man, I sure would be more excited for Fantastic Beasts II if a known abuser like Johnny Depp wasn't playing a main character in it.#FantasticBeasts2

yeah uh I'm not about to pay to see an abuser playing an abuser@jk_rowling it's incredible that you've been so vocal about supporting women and somehow find it acceptable to keep Johnny Depp in your movie. this lets us all down.

Raise your hand if you would literally rather see the cartoon dog from Coco play Grindelwald instead of Johnny Depp #FantasticBeasts2 pic.twitter.com/dhLkg0Vcnr

gellert grindelwald was a feared dark wizard who did a lot of bad things but his ultimate crime remains being johnny depp https://t.co/7cfpehrZUq

Like Kevin Spacey being replaced with Christopher Plummer, can we get Johnny Depp CGI'd out of the film?! #notmygrindelwald

I'd be more psyched for the Fantastic Beasts sequel if Johnny Depp wasn't a part of it. I'm still pissed about that and how betrayed I felt watching the first one.

Casting aside Colin Farrell for Johnny Depp has been the biggest misstep in #HarryPotter universe since Cursed Child was released. #FantasticBeasts pic.twitter.com/Ork46t6d1c

Literally nobody asked for Johnny Depp to be in the new Fantastic Beasts movie please just use Colin Farrel nobody will be mad.

The real crime of Grindelwald is not recasting Johnny Depp 🙄 https://t.co/gVfaREPhNa

Fortunately someone had a brilliant idea about how to solve the issue: