If you think you're desperate to know the answers to all of the Star Wars theories floating around out there, you don't hold a candle to Josh Gad. The Beauty and the Beast actor is itching for information about The Last Jedi, so he decided to go right to the source to get it: Daisy Ridley. The actress, who plays Rey in the new trilogy, didn't give up the goods, although she nearly buckled under peer pressure not only from Gad, but also Chris Pratt, Bryce Dallas Howard, Penélope Cruz, Leslie Odom Jr., and more. "This has been a battle of attrition. #daisyridley has been a force to be reckoned with," Gad captioned the hilarious Instagram video of their encounter. "In many ways she is the Vader to my Luke or the Taylor to my Katy. But like any good opponent, I have tried to outmaneuver her at every turn. This will be her final judgement. May the force be with her, because kids, she is going to need it. All I ask is that you don't ruin the surprise for others."

Questions range from the true size of Supreme Leader Snoke to whether or not the new movie will have any musical numbers. "Does Luke finally get to say any lines in episode eight?" J.J. Abrams, director of The Force Awakens asks. "Please tell me, Daisy." Sadly the only thing Ridley gives them is a coy smile. Gad has been trying to get answers out of her for the past few weeks on the set of their upcoming film, Murder on the Orient Express (all of which you can see below), but according to the actor, "It didn't go well." Apparently we'll just have to wait until episode eight premieres later this year to find out who the last Jedi really is.

In anticipation of my FINAL attempt to coax Daisy Ridley into sharing Star Wars news, here again are my first three efforts. Tomorrow, I will bring everything to the table to bring you the truth and I do mean everything. 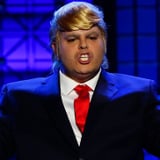 Lil Nas X
Lil Nas X Is Basically a Telfar Snow Bunny, and I Want What He's Wearing
by Sarah Wasilak 1 day ago

Celebrity Instagrams
Lizzo's Latest Shout-Out to Chris Evans Has Us Asking, "Why Aren't They a Couple Already?!"
by Princess Gabbara 2 days ago

Lizzo
Are We in Wonderland? Lizzo Delivered a Floral Fantasy in This Whimsical Purple Catsuit
by Chanel Vargas 2 days ago