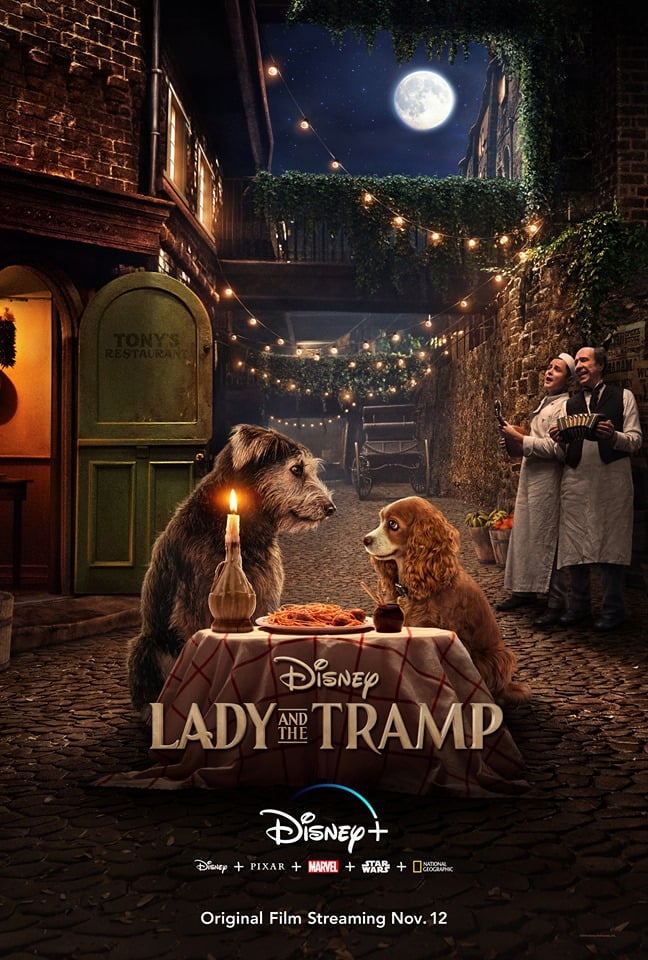 Disney Reveals First Look at Lady and the Tramp Remake, and Yes, They're Real Dogs!

To kick off the first day of its biennial D23 Expo, Disney dropped release dates and poster art for several of its upcoming Disney+ releases, including the first poster for the live-action remake of Lady and the Tramp. The image for the live-action reboot of the 1955 classic features its big stars, real-life shelter pups Rose and Monte, who play Lady and Tramp respectively. And, of course, they're seen re-creating the iconic spaghetti scene outside Tom's Restaurant.

This time around, the film is truly live-action instead of computer-generated animation, so folks shouldn't get too weirded out watching the film. Plus, with an amazing voice cast and some truly adorable dogs, it's hard for Disney to really go wrong with this film. So even if you're close to your breaking point with all these live-action remakes, at least this will basically be like one long dog video! Lady and the Tramp will premiere exclusively on Disney+ when the streaming site becomes available on Nov. 12. Check out Disney's Twitter reveal ahead, as well as some reactions from fans that prove everyone is a little divided on where to stand with the upcoming release.

Neve Campbell
The Latest Scream Was Filled With Twists and Turns, So Let's Break Down That Ending
by Amber Frost 9 hours ago

Star Wars
What Do Tusken Raiders Look Like Under Their Masks in The Book of Boba Fett? Let's Investigate
by Michele Mendez 2 days ago